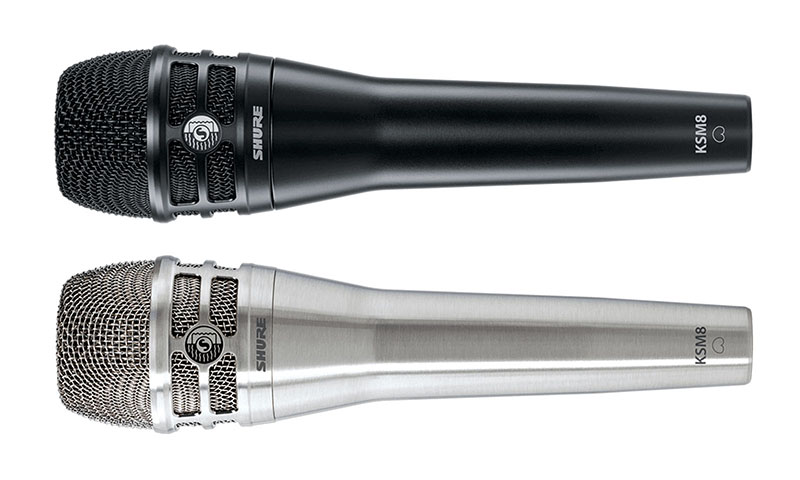 In the world of microphones, Shure is king. The most popular microphone in the world is the Shure SM58, which is a unidirectional handheld dynamic microphone with a cardioid polar pattern. It’s popular because it’s sturdy, and therefore well-suited to the demands of the stage, and it has a great sound. It’s a sound that all other handheld mics are measured against.

Shure’s new KSM8 Dualdyne, introduced at NAMM this year, is, at first glance, a very similar microphone. Like the SM58, it’s a unidirectional handheld dynamic microphone with a cardioid polar pattern and it’s designed to withstand the rigors of live performance. But what’s great about the KSM8 Dualdyne is that it takes all of the features of the SM58 and improves upon them, while also addressing issues that are not only common to the SM58 but all other microphones of its kind.

Directional microphones are prone to proximity effect, which is a boost in low frequency that occurs the closer the signal source is to a microphone. Shure has managed to find a way to reduce this effect in the KSM8 by employing a capsule design with two diaphragms, once active and one passive, hence the name “Dualdyne.” By using two diaphragms, low frequencies are essentially blocked by the first one as air passes through it towards the second diaphragm. This reduction in proximity effect is an enormous improvement, especially for a live setting where the performer’s orientation to the microphone can be constantly changing. The KSM8 sounds tonally consistent on-axis, off axis, and at varying distances up to 6 inches. Most microphones, like the SM58 for example, compensate for proximity effect by adding a boost in the 4k range to offset the added low frequencies. The KSM8 Dualdyne’s reduced proximity effect eliminates the need for this corrective action by producing a clear, natural response across the frequency range (40Hz to 16kHz) of the microphone. This also means less need for processing and EQ, which equates to less work for the engineer. Additionally, the KSM8 Dualdyne combats plosives, mechanical noise, and handling noise with “DSS” – Diaphragm Stabilization System, and and internal pneumatic shock mount that suspends the cartridge within the microphone. Essentially, Shure has engineered the KSM8 handheld microphone to have the same cushion that a studio condenser microphone would have.

The KSM8 Dualdyne feels great in the hand, and while it’s a beautiful microphone, it doesn’t ask to be handled gently. It’s available in black or brushed nickel, in either wired or wireless models, and its hardened carbon steel grill is actually lined with a hydrophobic material that makes the capsule nearly waterproof. It ships with a really nice hard case, which is much more substantial than the microphone bags we’ve come to expect, but with a microphone this nice, we don’t anticipate that it will spend much time in the case.