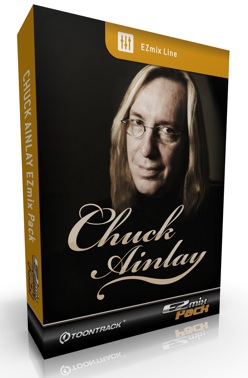 A great mix engineer is one with tools. He knows them back to front. Every little control, sweet spot, and parameter. That magic point where it’s just about to catch on fire; he knows how to tweak his gear to get the perfect mix. This process is never easy, though over time, it gets smoother.

So for a product like Toontrack’s EZmix to come along and proclaim, with its name alone, that it’s “easy” certainly raises some eyebrows. Sure, it’s easy to throw a plug-in on your channel strip, pick a preset, and sit back, but that’s hardly a craft. But what happens when those presets are designed by engineering icon Chuck Ainlay? What if the same force behind so many hits by the likes of Willie Nelson, Travis Tritt, and the Dixie Chicks, was the man whose hours and hours of woodshedding in the studio you were taking advantage of?

With the Chuck Ainlay EZmix expansion pack, you’ve got just that. In Chuck’s own words, he “decided to craft something that everybody needs, like a great vocal reverb with delay, a way of making a bass drum really punch through a track or a mix bus preset to optimum gain on your mix.” All of these capabilities (16 effects in all, wrapped up in a generous amount of customizable presets) are yours for the taking.

The Chuck Ainlay EZmix expansion pack brings a boatload of expertise to your fingertips, at a price that’s extremely enticing. The catch is that in order to get the most out of these presets, you need to have a working knowledge of what each effect does. “What’s a compressor? What’s the threshold control? What’s pre-delay?” If you can answer these questions, then you’ll be able to really harness the power inherent in this pack. If not, then hit the woodshed yourself and try again tomorrow.