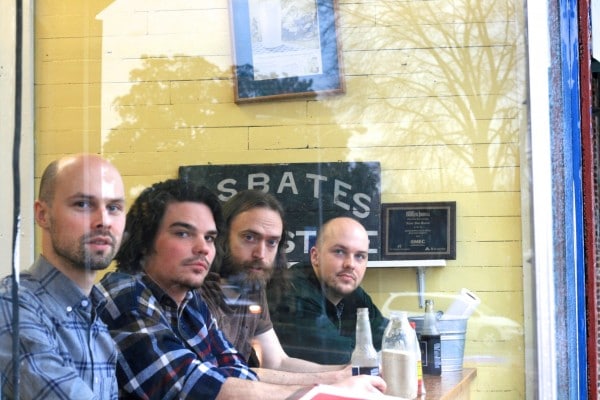 After the breakup of Mississippi rock band Colour Revolt, guitarist Sean Kirkpatrick switched out driving amplifiers for soothing acoustic guitars. The result is his new band, Greater Pyrenees, which will release its debut album on April 15 via Procrastinate! Music Traitors. The self-titled record will be the first music ever released through the label, which was founded by the members of New York alt rockers Brand New. In anticipation of the release, get an exclusive first listen to the band’s second single, “Close”.

Despite Kirkpatrick and his label’s emotive rock roots, “Close” is a mellow acoustic anthem—more a kindred spirit with Fleet Foxes than alternative rock. Bursts of slide guitar add a slight country influence to the Americana tune, which juxtaposes darker lyrics with a refrain that is begging to be sung out an open window on a summer road trip.

“‘Close’ is ultimately a song about intimacy, but from a disturbing angle,” says Kirkpatrick about the single. “It starts with a person who decides to make a bad choice out of desperation that leads to an inevitably horrible conclusion. As a result, this person finds himself responsible for the life of another human being and realizes that he’s never felt closer to any other individual until this moment.”

Check out the new track below. You can pre-order Greater Pyrenees through the Procrastinate! Music Traitors website.