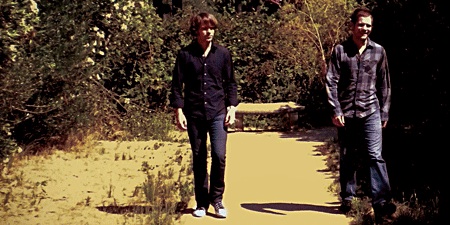 Red Clover Ghost is an indie-folk band from Maryland fronted by two identical twin brothers, Gibb and Clint Cockrum. Their self-titled debut LP comes out October 23 via Good Soil Records. Take a listen to the banjo-and-harmony-laden album track “The Dark Haired Queen” below. Does it remind you of anything?

“‘The Dark Haired Queen’ is one of our simplest compositions and is consciously derivative in a number of ways,” Clint Cockrum tells American Songwriter. “The lyrics, obviously, allude to mediaeval images and ideas; the chord progression, melody and backup harmonies draw from the folk tradition while also acting as an homage to American 1950’s pop-rock standards.

“The point is this: the celebration of a love is universal, transcending time and place. All musicians write love songs, so why not present one of ours with a deliberate innocence? The subtlety, we hope, will make it catchy, but in an honest way.”