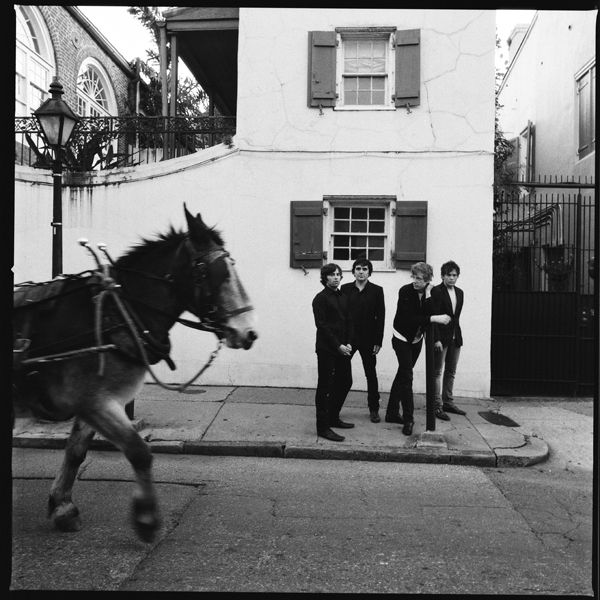 Spoon: The Power of Transference In 1995, Spoon were often dubbed “the next Pixies.” The tag never quite fit, but the two did share a love for writing glorious pop songs and then shrouding them with walls of noise and mystery. Over 15 years, the Austin, Texas band have survived lineup shuffles and early record label neglect, finding their signature style with 2001’s Girls Can Tell and quietly building one of the strongest rock catalogs of the decade. With their new self-produced release, Transference, Spoon show little interest in matching the mass appeal of past hits like “The Underdog.” Instead, they’ve produced a starker, more brooding album, full of lyrical confusion and musical jitters. The notably meticulous band don’t do anything by accident, so it’s a measured rawness on display, showcasing just how good the band are at what they do. We recently spoke to Spoon and tried to unravel Transference’s creation over a beer.

You chose not to work with a producer this time out. Did the rawer nature of the material dictate that decision, or was it something else?

Britt Daniel: We don’t know any producers, really. [Chuckles] I don’t think that we had a firm game plan when we started the record. In fact, we did some recording with Jon Brion to see how that would turn out. We did versions of “Written In Reverse” and “Trouble” with him. But then we kept working on our own. And I remember at one point just going—maybe what this record’s about is each song being done in a different way. Not bringing it into a studio and spending five months all together, but, instead, doing it all over the place. And when we decided to do that, then it was easier for us to be in charge.

Are you still advocates of recording mostly to tape, or is there a temptation to give up and use Pro Tools and e-mail to facilitate the record’s progress?

BD: It all hit tape at some point. Jim?

Jim Eno (drummer): We prefer tape and everything hit it at one point or the other.

BD: It was the first record where it wasn’t strictly two 24-track tape players. Sometimes, we did record digitally and then bounced to tape. Sometimes, it was recorded on cassette first, but every song was done differently.

There’s a lot of discord and noise on Transference. How do you strike a balance between noise and melody?

JE: What noise are you talking about? [Laughter]

Well, a lot of “Written In Reverse,” like the piano, has this sense of discord. And you’ll hear background noise. There’s a lot going on, but everything seems considered.

BD: I think that’s a good question. One of our strong suits is that we’re going after these songs that are fairly traditional. I think we’re always on the lookout for things that happen accidentally that we never could have thought of ourselves.

JE: They’re cool moments that keep you interested, but aren’t distractions, that will fit in. You know—ear candy.

BD: For a long time, I saw mistakes like that and would say “That wasn’t what I was meaning to do. Forget that.” But the more we’ve gone along, the more we really are looking for those things.

JE: Those become part of the song, or you miss them once you start weeding that stuff out, especially recording on tape, when you hear it every time you start the song. I miss how all those different mistakes fit together into a really cool intro.

The tonality of Transference made me reach for headphones—it feels like a record you play in the morning, or by yourself. Was this intentional?

BD: I don’t know. Was it purposeful? Was I discussing that at any point?

Rob Pope (bassist): Not out loud, no, but I could see that happening.

JE: For example, on “Trouble,” which may be one you were referring to. The performance that we captured on that four-track—it was very difficult to beat as a rhythm section.

BD: We had no idea we were recording for the record. We were just recording our progress as we worked.

JE: So it wasn’t about fidelity. It was about how the take felt to us. And it felt great, and we actually tried re-recording that song. Did we try to beat it?

BD: Then, I came up with the idea, why don’t we just record on top of that cassette? And everybody was like, huh?

JE: Just about everybody. [Longtime Spoon producer] Mike [McCarthy] was. I loved it.

BD: But…I know I wasn’t absolutely sure at that time. There was one part of the song that had the wrong note in it.

Eric Harvey (keyboardist): Yeah, that was me.

JE: Well, me too. We were playing together.

BD: We had to fix that, which was kind of amazing.

“Got Nuffin” rocks more than almost anything Spoon have done, yet it’s a red herring—it doesn’t capture the album’s tone. How did that song originate—and why tease the record so early?

BD: We had been wanting to do a single, and later decide if it was going to be on the record or not, if it fit. Because singles are fun! I think we tried “Who Makes Your Money” and we tried another. We never really loved how they were working, so when we finally got one that felt, like, “this is cool.” That was going to be the song.

JE: And it was the only thing that was done! So did we plan to throw people off? No.

Radio and retail have lost some influence lately, as have the major labels. The combination of indie labels like Merge and the ability to sell digitally and license to TV and video games seems to have shifted the power back to the artist. Has this helped you earn a living at music?

BD: It’s never been easier for us, but that’s just because nobody ever gave a shit before.

JE: And we know a lot of young bands that can’t make a living doing music now, so I think it is just where we are as a band.

JE: With the licensing, that is a big deal. They are embracing independent artists. That’s great, but it is still really difficult to get a record deal to get someone to put your record out, so we have a lot of friends that have had a hard time with that.

BD: Jim has worked on a lot of records.

JE: I’ve worked on a lot of records that have never come out. Spec jobs—I ‘spect not to be paid.

Over the past few years, your early backing has helped bands like White Rabbits and Black Joe Lewis. Do you feel an obligation to help or mentor newer acts when you admire their work?

BD: I don’t feel an obligation. I just feel like it is fun if you really like their music, and it’s cool to work with them. And I found being involved on the production end of a record, where I hadn’t written the songs and it wasn’t me being the vocalist—it was a totally different experience and you can really step back. All those mind games kind of slip away—at least, most of them do. So for me, it’s just for fun.

Does your current status playing larger venues make it a challenge to play quieter material like “Goodnight Laura”?

JE: That’s one we haven’t played live. That would give me a chance to pee.

BD: I don’t think the size of the venue matters much. It’s just a matter of if you can pull it off. We haven’t tried working that one up, but I’d like to. We’re going to try to get every song going and playable…

EH: Even on the last record, it took a long time. At some point, we could play every song from the record, but it took a while.

BD: That always surprises people that aren’t in bands. “What do you mean? You played it on the record.” Well, it’s a totally different process, buddy.

People throw words like “meticulous” and “consistent” around about Spoon records — you don’t often hear anything like silly or spontaneous. Does that side of the band exist?

EA: Well, this album’s got fewer inside jokes on it. I think, on the new one, there are some vocals on there that I didn’t think would end up on the final version. You hear a demo and Britt does some weird little thing that sounds funny. It makes me laugh and I think, “That’ll probably get turned into something more serious.”

RP: I’m just happy the Bon Scott moment made it.

RP: Which was just a scratch vocal, but all of us were just cracking up.

BD: Well, we can be really meticulous. I think it’s possible to be meticulous and also have spontaneous elements of the recording. We weave in as many mistakes as we can, ‘cause they’re charming. But are we aware that they’re there, and did we turn them up in the mix? Yes.

This record also has longer songs than usual—Spoon definitely isn’t afraid of a two-minute song. And there’s stuff pushing five minutes here and longer passages where it’s just music. Is that in keeping with the “demo” feel?

BD: It has less to do with demos—what I wanted to do were songs that mostly just stayed in one chord, and to let the power of the song come through in the repetitiveness or the intensity. You don’t get that from “The Underdog.” It’s a good song, because it’s well-constructed, has tons of chords and has melody. But there’s a lot of great music out there that is more powerful just simply from the repetition. And I wanted to try to do that for once.

I was amused to watch the Spoon videos with [Japanese dancing robot] Keepon on YouTube. Was it fun to do a sequel? My two-year-old loves it.

BD: That’s cool… but I don’t think that little robot is very rock and roll! [Laughter] The good thing about the second video was that we got to go to Japan for free and eat a lot of incredibly expensive food! But we didn’t have anything to do with that one, the dancing thing.

JE: Nor did we receive any free robots.

BD: Well, that’s a $25,000 robot. It is actually cool—it helps autistic children come out of their shells. And that’s really the video I want to see—the documentary on that.