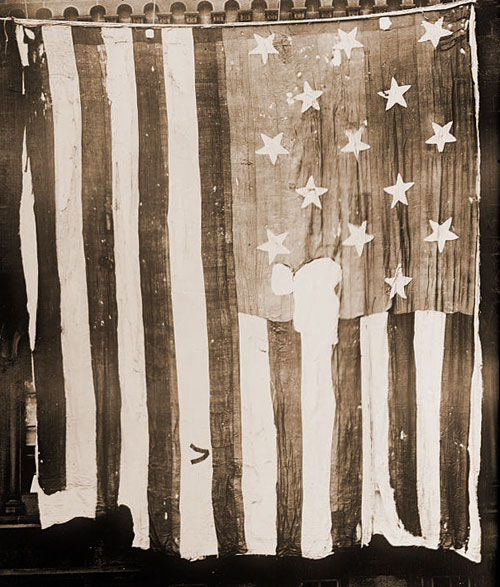 The Star Spangled Banner Is Not A Song, or Is It? All the hoopla about the wonderful vocalist, Beyonce, lip or not lip synching our national anthem, made me think about the song itself. Why is the Star Spangled Banner so difficult to sing?

First and most obvious, the Star Spangled Banner is a song composed with a fairly extensive vocal range. When performed in the key of ‘B flat’, the melodic range of the song is from a ‘B flat’ below middle ‘C’ to a high ‘F’. The total range of the piece is an octave and a half. So, it’s always a bit dicey when a vocalist doesn’t have the high ‘F’ for the word free. We all wait in great suspense to hear if he or she is going to hit the note that makes us feel the sense of glory, freedom, respect and national pride we have for the United States. But sometimes the unexpected happens. We stand and cringe because of the torturous execution of the song. Okay, the Star Spangled Banner is difficult to sing partly because it has somewhat of an extended range. If you are aware of the late Whitney Houston’s recording of the work, you would have to say that her rendition does inspire hope, faith and patriotism. Whitney nailed it! In the key of ‘B flat’, the first melodic phrase starts on the ‘F’ above middle ‘C’, jumping down a major triad, then jumping up a major triad, then up to the octave and then up to a major third above that. It finally slides down two notes and then jumps again down a sixth to the third and then finally up two notes to the fifth. The melody flops around like a fish in a rowboat. The high note on the word ‘Free…’ into ‘And The Home Of The Brave?’ is sung when the vocalist is exhausted and completely out of breath, making it difficult to get the sounds out. The melody at the end of the song from ‘Free…’ through ‘Home Of The Brave?’ also feels as if it could be the end of a song sung in a beer hall. (more about this later)

The Star Spangled Banner sounds wonderful when played by a good military band.

There is a visceral feeling you get when you hear it played in this way. It makes me wonder if those involved in the nurturing of our national anthem paid much attention to the vocal range or the lyrics. It seems as if they were more concerned with placing the emphasis on the nobility and authoritative sound that was felt when played by a military band.

But, melody isn’t the only reason that the Star Spangled Banner is a vocalist’s nightmare. Songs are comprised of not only melody, but also by the words that are attached to each note. When a song has words and melody that meld together in perfect harmony, we call it ‘the marriage of the music and the lyric’. When the marriage is flourishing, you feel the melody and lyric as one entity. The Star Spangled Banner is not a great example of such a marriage. There are a great many issues with the lyric and they are as much the reason the song is difficult to sing as is the melody.

(Now go back and forth from each comment to the lyric to better understand the problems.)

These combined issues concerning the lyric and the melody are what make the Star Spangled Banner so difficult to sing. There are numerous examples of a vocalist forgetting a line and messing up big time on TV, this includes the pros who attempt to conquer the beast.

But, the most significant reason that the Star Spangled Banner is so difficult to sing is that, strictly speaking, it is NOT A SONG. It’s a POEM disguised as a SONG. When looking at the shape of the lyrics on a page, it looks like poetry and not like a standard lyric form. Poetry writing and song lyric writing are two different art forms, as different as night and day. Yes, you may be able to find some similarities here and there, particularly if a poem has rhymes in it. Also, musical motifs may repeat in a poem set to music as it does in a song. But for the most part, they are two different animals. A poem that is set to music is usually called a tone poem and the Star Spangled Banner is a tone poem running around in a song’s clothing.

In investigating this horrible deception, I found myself digging deeper into the history of the creation of this piece to find out where it all went wrong.

The Star Spangled Banner was penned on a rainy night in 1814 by the 35-year-old lawyer and amateur poet, Francis Scott Key. He was awestruck and inspired by witnessing the bombardment of Fort McHenry in Chesapeake Bay by the British Royal Navy during the War of 1812. After the battle, he observed that the American flag was still flying proudly over the fort. The music was written by the English composer, John Stafford Smith. Key and Smith, a ‘one-hit’ song collaboration!  But, the melody for our national anthem is actually from another John Stafford Smith composition, The Anacreontic Song. Composer stealing from himself! Not an original melody? Plagiarism in songwriting? OMG!!! The story goes like this: Key gets back from this moment in history and gives the poem to his brother-in-law, Judge Joseph H. Nicholson, who observed that the words fit the popular melody of The Anacreontic Song. The Anacreontic Song was the official song of the Anacreontic Society, an 18th-century London gentlemen’s club comprised of amateur musicians. Judge Nicholson took the poem to a printer in Baltimore, who anonymously printed the first known broadside on September 17, 1814. From pen to published in 10 days! Amazing! Ok, a judge/brother-in-law; a secret society; amateur musicians and an anonymous printer! Sounds like a mini-series! Oh, by the way…Anacreon was a Greek poet who spoke in meter.

On September 20, 1814, both the Baltimore Patriot and The American printed the song, along with the notation:”Tune: Anacreon in Heaven“. The song quickly became popular. Soon afterwards, Thomas Carr of the Carr Music Store in Baltimore published the words and music together under the title: The Star-Spangled Banner, although it was originally titled: Defense of Fort McHenry.

The song’s popularity increased, and its first public performance took place in October, when Baltimore actor, Ferdinand Durang, sang it at Captain McCauley’s Tavern (Remember, I mentioned earlier that that the song felt as if it might appropriately be sung by beer drinkers!) Washington Irving, then editor of The Analectic Magazine in Philadelphia, reprinted the song in November 1814.

Wait, there’s more!!! By the early 20th century, there were various versions of the song in popular use. Seeking a singular standard version, President Woodrow Wilson asked the U.S. Bureau of Education to provide an official version. In response, the Bureau enlisted the help of five musicians to agree upon an arrangement. Writing by committee, what a concept, so ahead of its time!!!

Okay, imagine the conversation between the five musicians.

Musician 1– So, what do you think?

Musician 2– We should keep this section. What do you think?

Musician 3– We should keep that section. So, what do you think?

Musician 4– I like both parts. What do you think?

How many cooks did it take to write the Star Spangled Banner?

Here is where the story gets really interesting. The musicians involved in this collaboration were Walter Damrosch, William Earhart, Arnold J. Gantvoort, Oscar George Sonneck and John Philip Sousa. The standardized version that was agreed upon by these five musicians premiered at Carnegie Hall on December 5, 1917. An official handwritten version of the Star Spangled Banner shows that each measure of the work was approved by all members of the committee.

Before 1931 other songs like Hail, Columbia and My Country, ‘Tis of Thee (also with a plagiarized melody from God Save The Queen), and others, would compete to become the national anthem of the United States. In 1916 President Woodrow Wilson ordered that the Star Spangled Banner be played at all military and on other appropriate occasions. The rest is history. It’s now played at all major events from the Superbowl, to the World Series, to NASCAR races, and at high school and college graduations from sea to shining sea.

On March 3, 1931, a law signed by President Herbert Hoover stated that the Star Spangled Banner was adopted as the national anthem of the United States of America. That’s one way of getting a hit song…Executive order!

Now we have no choice, the anthem must be sung and it is still a beast to learn. Christine Aguilera, Jose Feliciano, Beyonce, Aretha Franklin, and the vocalist from the high school chorus who sings it at the weekend football game will tell you that it isn’t an easy song to perform.

Sadly, a Harris poll found that two thirds of Americans do not know all the words to the anthem. I wouldn’t suggest this song as an American Idol audition piece.

So, now you know, the Star Spangled Banner is a tone poem/song, the music was borrowed and it was made a hit by Executive order of the President of the United States. Does it really matter if someone is lip synching or not? What matters is that we simply stand with pride, honor and give respect to our country as this moving but poorly crafted tone poem/song is sung.

Oh by the way, the Star Spangled Banner has three stanzas! Yikes!

New CD release, What’s Next? featuring Alex Skolnick on guitar and Boris Kozlov on electric bass guitar. His solo piano improvisations can be viewed at: Randy Klein Piano Improvisations He is currently completing a new book on songwriting for In Tune Partners, titled, ‘You Can Write A Song’.