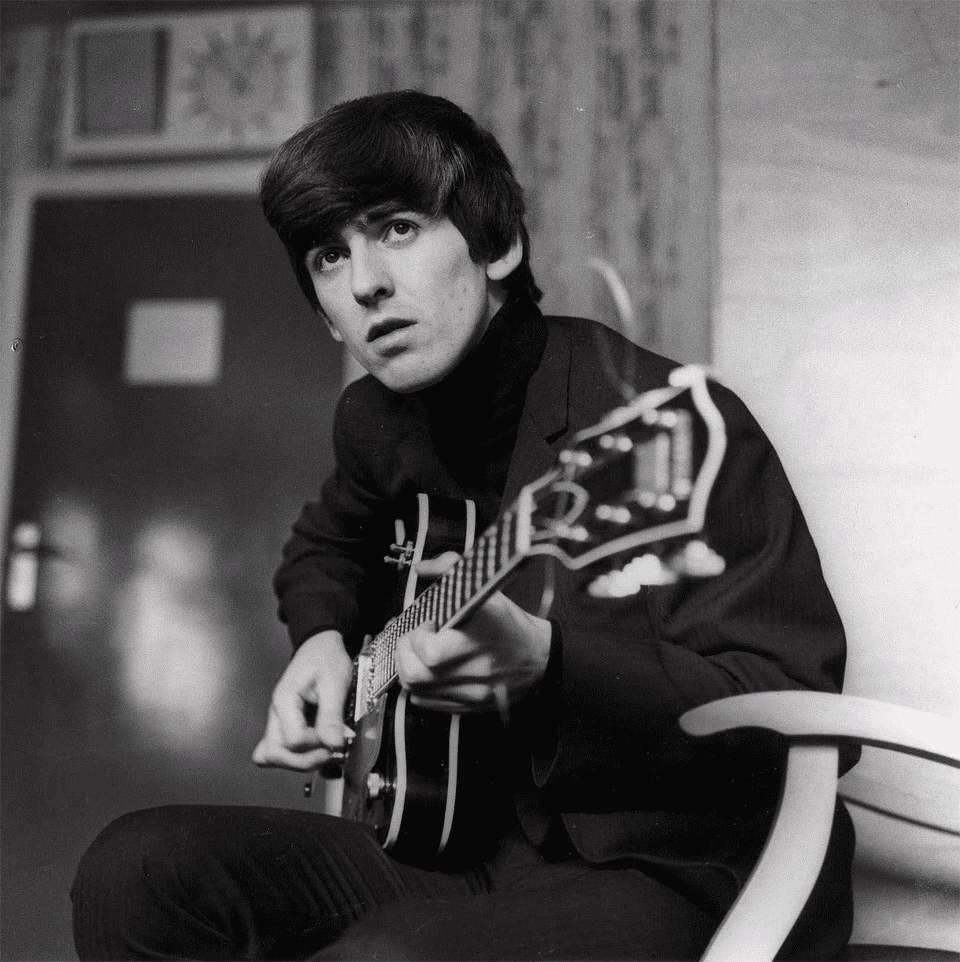 Sunday was George Harrison night in Hollywood, as many great artists gathered at the historic Henry Fonda Theater to sing the songs of the one they used to call “the quiet Beatle.” A George celebration has been under way all week, triggered by the new release on Capitol records of George Harrison: The Apple Years 1968-1975, a big boxed set that contains George’s first six solo albums, as well as unreleased live recordings and demos. On his TBS TV show last week, Conan O’Brien celebrated George by having a different artist perform a George song each night, including Paul Simon, Beck, Norah Jones and George’s son Dhani Harrison.

But it was Dhani who was the heart of the show. He looks very much like his father – like a young, happy George – and sings and plays with the same level of quiet intensity and joy. The love directed at him, and flowing from him, all night, attested to the love for the whole family – Olivia Harrison was in the house too – and provided a happy wellspring of exultation all night.

George is famous, of course, for his serious and spiritual side, and solemn songs of transcendence such as “All Things Must Pass,” “The Art of Dying” and “Within You Without You.” But he’s also written many songs of pure joy and light, and the Fonda rocked with that exalted, expansive spirit all night, as exemplified in the pure sunny bliss of ice melting in “Here Comes The Sun,” performed by a perpetually smiling Perry Farrell, as well as “Got My Mind Set On You,” kicked into high gear pure pop elation by The Killers’ Brandon Flowers.

Dhani breathed pure fire into “Let It Down,” and also delivered an inspired version of “Ballad of Sir Frankie Crisp (Let It Roll)” as well as his dad’s plea on the White Album to Eric Clapton not to eat too much candy on the remarkable “Savoy Truffle.”

The great Ann Wilson reminded everyone why she’s so beloved – she sang George’s timeless anthem of courage, “Beware of Darkness” with great power and grace.

Even when George was angry, as he was about the huge amount of money he was taxed yearly, he wrote an angry song that is also funny and rocks, the great “Taxman,” which was nicely rendered by Cold War Kids.

Conan was up second, joking that it was smart to get the comic on early. He then said, “Someone told me this was a tribute to George Michael. I have been rehearsing the song ‘Faith’ all week.” He then played electric guitar and sang a soulful version of “Old Brown Shoe.”

Brian Wilson, with his old pal and fellow Beach Boy Al Jardine, performed a strong and confident “My Sweet Lord,” reminding us of the early 50s doo-wop heart of this spiritual song. Brian, who often seems he’d prefer to be anywhere else, seemed happier than ever singing this song by his old friend, and the audience embraced him with adoration.

Norah Jones (the daughter of one of George’s true idols, Ravi Shankar) brought much heart and purity to George’s most recorded song, the one infamously referred to by Sinatra as his “favorite Lennon and McCartney song,” “Something.” Rather than invent a new approach to the song, she coasted purely instead on the sweet melodics and beautiful chords, and was transported. It was a haunting moment. With Karen Elson, she also sang the one song that George wrote with Bob Dylan, “I’d Have You Anytime.” (George and Bob started, but never finished, a couple others.)

The Black Rebel Motorcycle Club reinvented George’s remarkable reflection on death, “The Art of Dyin”; it was chilling.

Weird Al Yankovic is usually such a comic figure that we forget he’s an excellent singer, but he reminded us by singing a great version of “What is Life.” He did do a silly dance in the midst of it, which delighted the audience, but also sang beautifully throughout.

It was the kind of night nobody wanted to see come to an end, but as George taught us long ago, all things must pass. But Dhani ensured it ended with joy, and invited everyone onstage and in the audience to sing along on a song his dad wrote with his second super group – The Traveling Wilburys – and brought us a poignantly sweet and powerful version of the enduring “Handle with Care.” The Wilburys was a band his dad invented simply for the fun of doing that which he loved best: making music with those he loved. That fun, and that sense of friendship, and that timeless joy he tapped into time and time again in his too brief life, ended this tribute with love and elation.