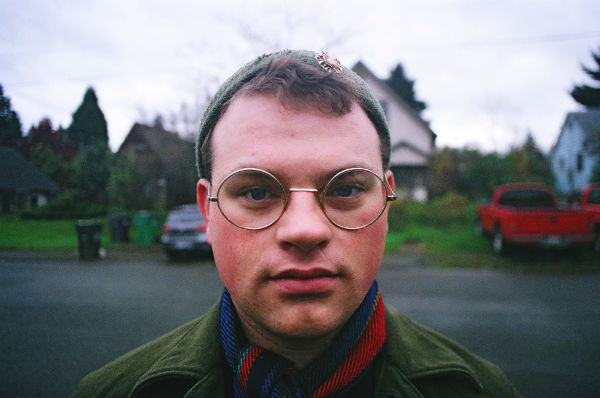 Growing up in Phoenix, Arizona, says Stephen Steinbrink, one learns to find “poetry in the banal.”

“When I think of iconic, archetypal images in my life,” the 24-year-old singer-guitarist elaborates, “I think about driving on the freeway… strip malls… cement… grass coming out of cracks in the sidewalk. I’m able to see beauty in the expanse of tract housing, or a Taco Bell wrapper in a tree.”

A rare songwriting talent with an eye for incidental detail, Steinbrink’s sound captures the soul-crushing isolation of the suburban West.

“Arizona is oppressive,” he says. For its creative youth, “hearing about shows [is] an important part of surviving. I remember being 15 and going to as many as I possibly could because it was the only glimpse of the outside world I could get.”

His musical education actually began earlier. With a wry smile, he recalls “eating Doritos in the car, listening to [Neil Young’s] Harvest Moon” at age five.

As a pre-teen, Steinbrink discovered Beck, Nirvana, K Records, and the greater American underground. A self-taught guitar player, he soon began writing and recording his own material. With a fierce work ethic, he quickly found his footing.

By 16, the young Phoenician was opening for indie-rock luminaries like Jason Molina and Dirty Projectors, and has since issued six LPs and seven EPs for a host of small labels. Most, like his latest, I Drew A Picture, are released eponymously, though some, like 2011’s full-band Desert Wasn’t Welcome, bear the alias French Quarter.

With wisdom and quiet confidence beyond his years, Steinbrink synthesizes classic influences — Fleetwood Mac, Arthur Russell, Elliott Smith — into an easygoing, relatable style all his own. Even-keeled emoting over taut, Neil-inspired riffing is his clear forte, yet each Steinbrink and French Quarter release feels highly conceptualized and unique. A cut above the no-budget D.I.Y. status quo, they’re intricately played and engineered, presented in clean, oft-handmade fashion.

Working in a variety of media — vinyl, cassettes, even VHS’s — usually alone, but sometimes with collaborators, the depth of Steinbrink’s catalog evidences an ability to move forward without overthinking. And like Robert Pollard and Daniel Johnston before him, his short-run offerings frequently contain lost classics.

He’s long seen the world through a desert-hued lens, but I Drew a Picture goes further. By Steinbrink’s calculations, his hometown is doomed, and — as he sings on the song of the same name — “nobody wants to talk about it.”

“In Phoenix,” he explains, “there is no water. It’s diverted from other places, and it’s running out. I read a study that said there’s only ten years’ worth left. Then what?”

“I was living by myself in this huge, weird old house,” he says. “I’d work five hours, then go home and record every day for six months, not interacting with anyone. It got dark… I was losing my mind. One day, I was walking around, actively looking for ugly things.”

What he found was “a tree in someone’s yard that had fallen over because it was so dry, and a house on fire… just, like, a house, in a neighborhood, on fire.”

“I walked into the market,” Steinbrink continues, “where people were screaming at each other. Then I hiked up this beautiful mountain, and was feeling at one with the desert plants. I reached the top, out of breath, and on the other side was a parking lot… then, a manmade lake two miles long and a half-mile wide. I looked out and was like ‘this is fucked, so fucked… this is not good.’”

Much of Picture sets these scenes and feelings to music.

The high, lonesome “Salt River Bed” is a post-apocalyptic guided tour of collegiate Tempe. “The condos are empty,” Steinbrink sings. “The university was the first to burn, the river turned to mud, and there’s nothing to drink.”

On “The Punks,” he envisions his peers as the only living survivors. “They’re still having shows in warehouses / they are the last ones, it’s safe to assume / hoarding generators from the pigs / loot the Safeway, and then burn it down.”

Compared to Steinbrink’s past releases, Picture carries weighted intent. One might call it his first true concept record. Yet while its tone is blunt, its sound isn’t harsh. “It’s All Uphill” continues Steinbrink’s trend of beginning albums in upbeat fashion, while the autobiographical, New Wave-flavored “To Be New Again” and Beatlesque “JPEG of a Friend” show perfected pop sensibilities.

“After that intense walk,” he says, “I had to take a step back. I think [Picture] is a good mix of songs. Some are kind of light, and the others are about my idea of what will happen when [Phoenix] goes to shit, because it will, and it scares me. It’s heavy to live your whole life there, then realize you have to get out as soon as possible.”

Upon wrapping Picture, Steinbrink knew his time had come. He sold off his possessions and packed his bags for Olympia, Washington.

Perhaps more than anywhere, the small but culturally fertile Northwest city had taken Steinbrink in as one of its own. He’d recorded Desert Wasn’t Welcome at Olympia’s Dub Narcotic Studio last year, and Seattle’s Off Tempo imprint released the LP. Assessing relocation options, it just made sense.

“It’s the polar opposite of Phoenix,” says Steinbrink, surveying his overgrown backyard while sipping rose tea on a cool, crisp day. “It’s so beautiful, in contrast to my old yard, which was a dirt lot with a slab of concrete on it and a big pile of trash in the corner.”

The move has liberated Steinbrink in other ways. He’s “embracing the solo musician vibe,” already having written 20 songs since arriving three months ago.

“I’m getting into the craft of it more than I have in the past,” he says. “It feels good to be performing under my own name, and singing more simply about very personal things.”

While Steinbrink’s 2013 begins with a series of West Coast dates, then his first-ever European trip, Olympia life has changed his long-term outlook on touring.

“[Before], it was a way to escape,” he says. “Now I wake up, walk down the trail, go to the co-op and get breakfast, and my roommates come downstairs and we eat together. Then I go on another walk, maybe see a friend, go to a show… it’s nice. Touring will always be part of my life, but it’s not a means to escape anymore.”

Still, as the saying goes, you can take the boy out of — in this case — Arizona, but “coming from where I’m from,” says Steinbrink, “there’s no way I can not spend the rest of my life making art about it.”