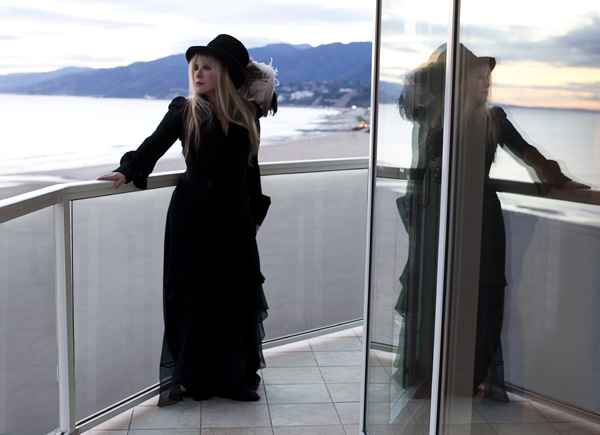 Stevie Nicks, “Everybody Loves You” With a chorus hook that seems in equal parts inspired by the hit DNA of U2’s “One” and REM’s “Everybody Hurts,” Stevie Nicks and Dave Stewart have penned a modern classic in “Everybody Loves You.”

The song comes on Stevie Nicks’ new album, In Your Dreams, produced by Dave Stewart. It seems appropriate that for Nicks’ first album in a decade, she’s chosen to tackle aspects of Fleetwood Mac’s complicated past: the romantic entanglements and revolving personnel doors that would lead to the group’s most successful work.

Fleetwood Mac began life as a Peter Green-helmed British blues rock entity, along with the rhythm section of Mick Fleetwood and John McVie, for whom Green named the band and who would prove to be the only stable force through years of lineup changes.

By the early ‘70s, Green was out, and the band seemed to be switching guitar-playing singer-songwriters like relief pitchers in a baseball game. (1974’s Kiln House seems a clear high-water mark for the ’50s blues-meets-’70s soft rock transitional period caretaken by Danny Kirwan and Jeremy Spencer.)

By 1975, Mick Fleetwood had moved the band to Los Angeles and was looking for a new guitarist. In a feature story, Nicks tells American Songwriter’s Lynne Margolis that “destiny” brought she and Lindsay Buckingham together.

“[Mick Fleetwood] definitely heard strains of Peter Green [in Lindsay Buckingham] and all the other famous guitar players who had been in Fleetwood Mac for the five years before that. So the fact that this big tall guy would come in and Keith Olsen would play him a song off a Buckingham-Nicks record that never really went anywhere, that two years before had opened to critical acclaim and then was dropped like a rock by Polydor—what are the chances of that? One in 20 million?”

Buckingham and Nicks would join the group and Olsen would produce the new lineup’s first album, Fleetwood Mac (their second eponymous release). The Buckingham-Nicks dynamic would help move the band into Fleetwood Mac’s golden era of ‘70s California smooth rock, which in 1977 produced Rumours, created in the midst of the power couple’s disintegration.

Stewart also headed up a famous formerly-romantic musical duo with Annie Lennox in Eurythmics, and Nicks says there was an unspoken bond between the two when working together on “Everybody Loves You.”

“I immediately took it like he was writing that about Annie Lennox, because that sounded like a person from a duo writing a song about the other person in the duo. And what Dave and I had that was great was that we’d both been in really famous duos, so the whole time we were making this record, I feel like Lindsey and Annie were floating around in the room. Because a lot of the stuff that we both wrote seemed to be directed to our years as famous people in duos.”

Although Nicks considers herself a staunchly solo writer, she opened up her creative process to Stewart, working off a previously-written chorus for “Everybody Loves You.”

“I wrote all the lyrics on the whole record except for the chorus of ‘Everybody Loves You,’ and that’s the first song that [Stewart] sent me the night that I called him. It had the chorus, which said [sings], ‘Everybody loves you but you’re so alone, no one really knows you, but I’m the only one.’ He said, ‘Write the verses to that.’ And I said, ‘OK.’ But that’s not like getting a track with no vocals. He had set the song up with that chorus, so then I had to build a story around those four lines, which was great—it was a challenge.”

In many ways, “Everybody Loves You” could be an update on Nicks’ biggest song ever, “Dreams,” in which she sings:

Now here you go again
You say you want your freedom
Well, who am I to keep you down?
It’s only right that you should
Play the way you feel it

While “Dreams” dealt with the “rumours,” infighting, and complexities of being in a simultaneous professional and romantic (or once-romantic) relationship with Buckingham, “Everybody Loves You” is a nostalgic look back on what was.

“The words to ‘Everybody Loves You’ came from a poem that’s pretty old, like maybe 12 years old, that was definitely written about [Buckingham]. Where it says, ‘No one else can play that part. No voice of a stranger could play that part/It broke my heart,’ that’s pretty much all about Lindsey.”