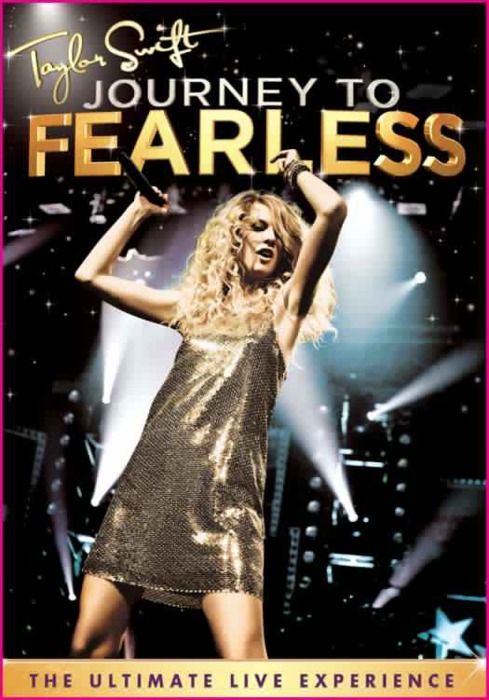 As a convert to Taylor Swift after she’d already become the youngest person in history to win the Grammy for Album of the Year, I loved the biting, expansive Speak Now, which was mostly maligned by Kanye fans, and found said Grammy winner Fearless too crowd-pleasing. Backtracking on YouTube, I delighted in the early, biting “Picture to Burn” and decided this DVD might be where to acquaint myself with Swift’s pre-Speak Now material. It’s not.

I’ve always winced when artists release a live document older than their newest tour (see also The Hold Steady’s A Positive Rage) and this paltry 43-minute concert-spliced-with-interviews only confirms my prejudice. Swift’s too talented and too smart for the Star Search-esque crap on Journey to Fearless, including a cliché voice-over intro (“This is the story of a little girl who dared to dream big”) and an unintentionally creepy benefactor who approached her at a gig about signing to his label (“the bad news is I don’t have a label”).

As for the actual “story,” not every talented songwriter is an interesting person, which goes double for a pretty, skinny blonde whose chief selling point is her perceived inoffensiveness (don’t tell the wicked Paramore tribute “Better than Revenge” or hickey-chasing “Sparks Fly,” neither included here). She has charisma to spare in her dorky camera asides (“Hi, I’m Taylor, I’m 11, I want a record deal, that would be awesome!” she self-mocks into a hand-phone) but Journey didn’t really explain beyond a reasonable doubt why everyone “shuns” her at school after she’d just sang at a baseball game. Or why she knows what the Mercury Records building looks like on a Nashville business trip when she demands her family pull over to drop off a demo tape.

We already guessed she had a great head for business (turning down her first record offer as an adolescent for not letting her pen her own songs) and I don’t mean to sound condescending by calling her early tactics “cute”—there’s just no other word for stuffing CD mailers with mom or baking radio hosts homemade cookies. But that’s as out of the ordinary as she gets offstage.

Which brings us to the concert, which peaks on the very first song, her biggest hit. “You Belong with Me” finds Swift in marching band regalia with backup cheerleader-dancers who eventually rip off her uniform to reveal a sparkly dress. Before “Tim McGraw” she announces with endearing offhandedness: “For this song I would love it if you would have your cell phones or glow sticks—or anything sparkly for me that you might have—and hold them up for me.” Her Fearless tour probably overflowed with likeable moments like these, but on this evidence the musical revelations are few; everything sounds like the albums, without a misplaced note or changed arrangement. How much niceness does a rock and roller need? You’re probably better off with the recently released Speak Now DVD considering it’s based on an album that takes enough risks to get her shunned for real.