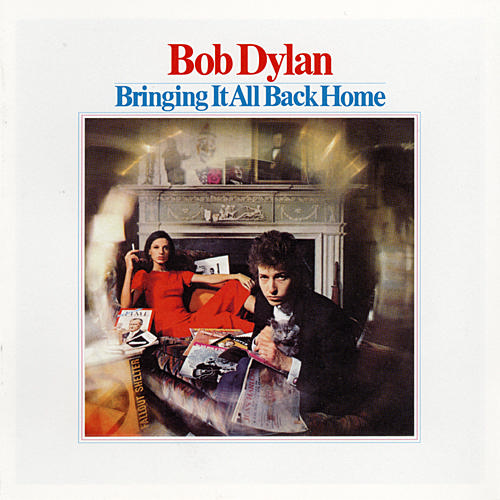 If you had to distill Bob Dylan down to his essence, the result would probably be “Subterranean Homesick Blues,” where he manages to cram 7 minutes worth of words into 2 minutes and 21 seconds of pop perfection. Witty, wise, rebellious, and verbally dexterous, “Homesick Blues” represents all of Dylan’s greatest attributes, captured at the precise instant he was giving himself a musical makeover. Add some drums and bass to acoustic guitar, and you’ve got a brand new bag.

It’s hard to imagine anyone not liking this song, with its bluesy balance of pop prophecy and street theater, and it’s interesting to contemplate how it would have been received by the folk music community had it not been presented with electric backing. Would Dylan have been embraced as a non-linear Woody Guthrie, or would his lyrical flights of fancy been deemed too great a folk music faux pas, regardless? Either way, Dylan’s use of electric instrumentation would go on to change the course of rock music history.

The song introduces the character of Maggie, who possibly reappears one album later in “Maggie’s Farm.” The lyrics rattle off a litany of satirical advice about consumerism, delinquency, and avoiding the Man, who’s coon skin cap should not be seen as a sign of being “with it.”

Walk on your tip toes
Don’t try “No Doz”
Better stay away from those
That carry around a fire hose.

It ends with a bit of whimsy that still resonates today, whatever it actually represents:

Much of the song is Dylan speaking through the voice of the squares, and sending up the values of straight society, which means “Homesick Blues” goes in one ear and come out the other, transformed by our inner sense of irony.

“Subterranean Homesick Blues” kicks off Dylan’s first foray into electric music, 1965’s Bringing It All Back Home. Its meter and chord progression borrow from Chuck Berry’s 1958 chart hit “Too Much Monkey Business” (Dylan himself has confirmed the link: “It’s from Chuck Berry, a bit of ‘Too Much Monkey Business’ and some of the scat songs of the Forties,” our man admitted recently). Its title may be an homage to Jack Kerouac’s free-form novel and tribute to hipster youth, “The Subterraneans.” Released in March 1965, it became Dylan’s first top 40 hit.

John Lennon was so overwhelmed when he first heard it, he was quoted as saying he didn’t know how he would ever compete. “You don’t have to hear what Bob Dylan says, you just have to hear how he says it” the Beatle quipped. Lennon went on to produce Harry Nilsson’s 1974 garage rock-style cover, which featured Ringo Starr on drums.

Musicians weren’t the only one who were influenced by the song. The 1960s radical communist group the Weathermen took their name from the song’s famous line, “you don’t need a weatherman to know which way the wind blows.” The Weathermen went on to bomb several political targets in the late sixties before disbanding.

The song is also famous for its sublime music video, one of the first of its kind, which opens the 1967 film Don’t Look Back. In it, Dylan flips cards containing key words from the song in time with the music, with uncanny timing, as Allen Ginsberg stands in the background, monitoring the poet’s progress.

The cards, which don’t always match the lyrics, were drawn in part by Joan Baez and Donovan. Australian rockers INXS payed homage to the scene in their video for “Mediate.” Radiohead displayed at least a tangential knowledge of Bob Dylan’s work by naming one of the songs to their 1997 dystopian masterpiece, OK Computer, “Subterranean Homesick Alien.” Along with Harry Nilsson, The Red Hot Chili Peppers and Alanis Morissette have each tried their hands at cover versions.