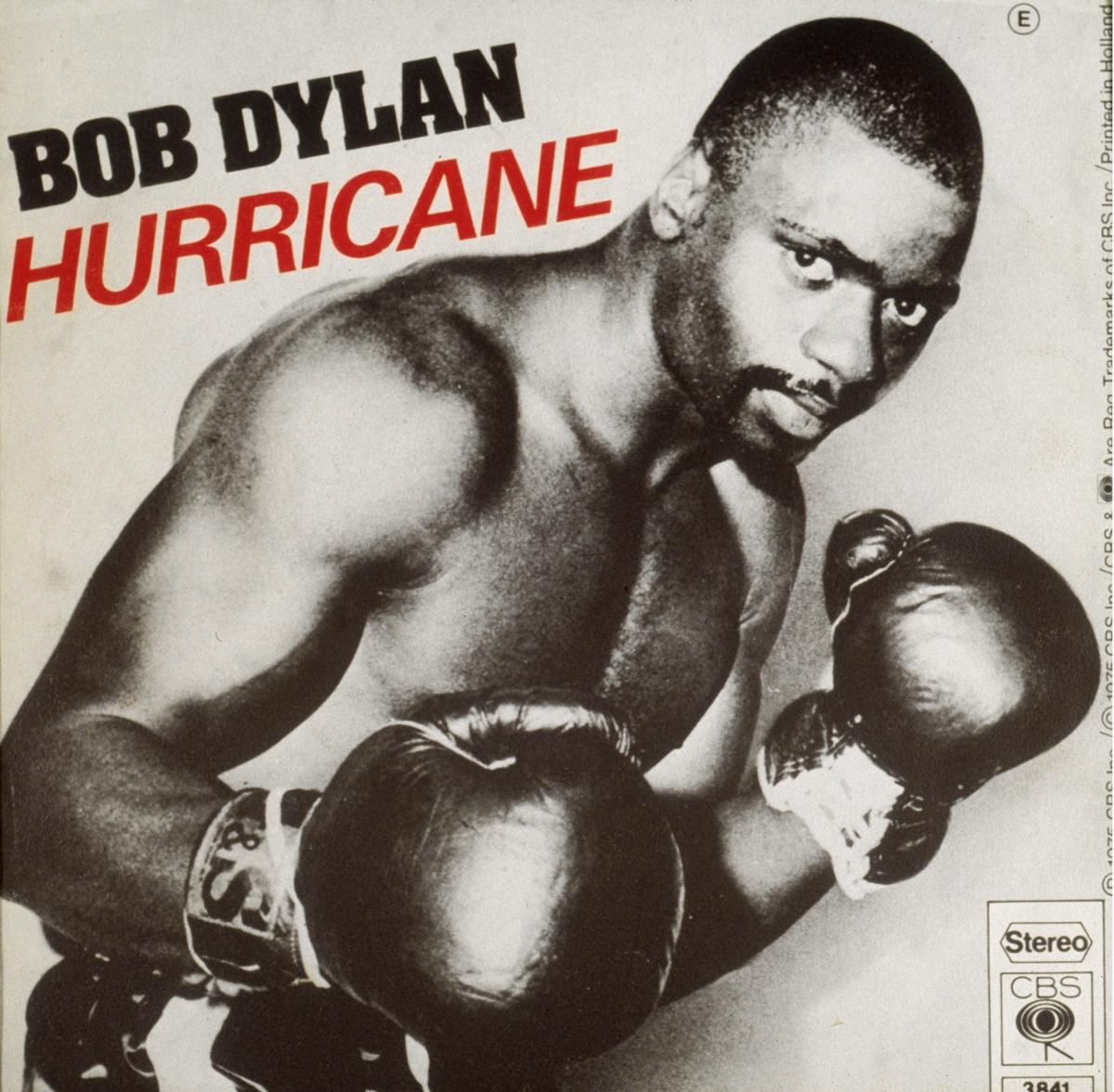 “Here comes the story of the Hurricane/the man the authorities came to blame/ for something that he never done/Put in a prison cell, but one time he coulda been the champion of the world!”

Hurricane is a song unique to Bob Dylan’s vast body of work. Driven by Scarlet Rivera’s frantic violin fills and Rob Stoner’s spidery bass lines, the eight-plus minute tune is like “Hattie Carroll” on steroids. Both songs deal with racial injustice, but only “Hurricane” actually helped get someone out of jail, even if it did take 12 years.

“Hurricane” unspools the story of the false imprisonment of boxer Ruben “Hurricane” Carter, who in 1967 was incarcerated for the murders of three bar patrons in Paterson, New Jersey. The song is the introductory track to one of Dylan’s most diverse and mystical albums, 1976’s Desire, and came at a time where no one expected Dylan to write another protest song (a Dylan-esque reason, if there ever was one, to write one.)

From its evocative opening lyrics (“pistol shots ring out in a bar room night”) to its righteous ending (“but it won’t be over till they clear his name,”) “Hurricane” functions like a real live detective story. It’s a song that peppers the listener with rich details and impolite truths, many of which are enough to make the hairs at the back of your neck stand up:

“In Paterson that’s just the way things go/If you’re black you might as well not show up on the street, ‘less you wanna draw the heat.”

“The wounded man looks up through his one dyin’ eye/ says ‘Wha’d you bring him in here for? He ain’t the guy!'”

“And though they could not produce the gun, the D.A. said he was the one who did the deed, and the all-white jury agreed.”

Harking back to the days when he used to rip his song ideas from the headlines of newspapers, Dylan masterfully sums up and dramatizes Carter’s story, and also manages to embarrass the system by coming off smarter than every lawyer, cop, and jury on the case. To live outside the law, you must be honest.

Another aspect that makes the absurdly wordy “Hurricane” unique: it’s the only Dylan song to contain curse words (unless I’m forgetting something). It also finds the one-time civil rights icon owning the “N word” like he was Patti Smith or Chuck D (“…and to the black folks he was just a crazy nigger. No one doubted that he pulled the trigger”). Another line could have come directly from Dylan’s “Masters Of War,” Freewheelin’ period, so similar is the language:

“How can the life of such a man
Be in the palm of some fool’s hand?
To see him obviously framed
Couldn’t help but make me feel ashamed to live in a land
Where justice is a game.”

“Hurricane” was the product of a writing session with playwright Jacques Levy. Levy, who was also a clinical psychologist, co-wrote every song on Desire save for “One More Cup of Coffee” and “Sara.” The collaboration was short lived: Levy’s contributions only appear on Desire.

Dylan was inspired to write “Hurricane” (whose chord progression in the verses echoes the one used in “All Along The Watchtower”) after visiting Carter in prison in 1975 and reading his autobiography, “The Sixteenth Round”. His circus-like Rolling Thunder Revue tour doubled as a way to stump for Carter’s amnesty. “If you’ve got any political pull at all, maybe you can help this man get out of jail and back on the street”, Dylan introduces the song on Live 1975: The Bootleg Series Vol. 5.

The story of the Hurricane has a (relatively) happy ending. He was freed in 1988, and all charges were dropped against him. Carter now works as a motivational speaker, and is the Executive Director of the Association in Defense of the Wrongly Convicted.

You won’t hear Dylan play this song live anymore, (after the Rolling Thunder Revue, he dropped it from his set list entirely) but you can hear it in the 1999 movie Hurricane. Indie-folk troubador and one-time Dylan tourmate Ani DiFranco also recorded a version, which you can hear here.