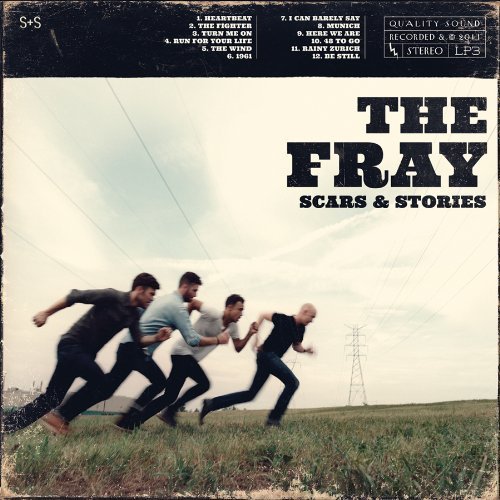 When rock guru Brendan O’Brien walked in the door, the piano went out the window. The Grammy-Award winning producer helmed The Fray’s third effort, Scars & Stories, and it shows with the Denver-based quartet’s biggest, most-produced and boldest album yet.

The Fray struck gold in 2005 with the chart-topping “Over My Head (Cable Car)” and carved a name for themselves with their painfully honest piano-ballads. For that reason, the band fell under fire from critics when they took the “if it ain’t broke don’t fix it” approach to their self-titled sophomore album. In response, The Fray brought in Brendan O’Brien (Pearl Jam, Bruce Springsteen) with hopes that he would be the catalyst for a new sound and process.

The album seemingly picks up where the self-titled sophomore record left off with the catchy, upbeat single, “Heartbeat.” With shimmering guitars and a waning hook, the song is eerily reminiscent of the massively successful “You Found Me,” and is familiar territory for fans of The Fray. Themes of heartbreak and redemption continue in the songwriting from the band’s chief writers, lead singer Isaac Slade and rhythm guitarist, Joe King. However, the band that once quietly sang “How To Save A Life” has since grown into their own with this edgier, arena filling record.

On Scars & Stories, The Fray achieves a bigger sounding record a la Coldplay or Switchfoot, but does so in a way that is unmistakably their own.