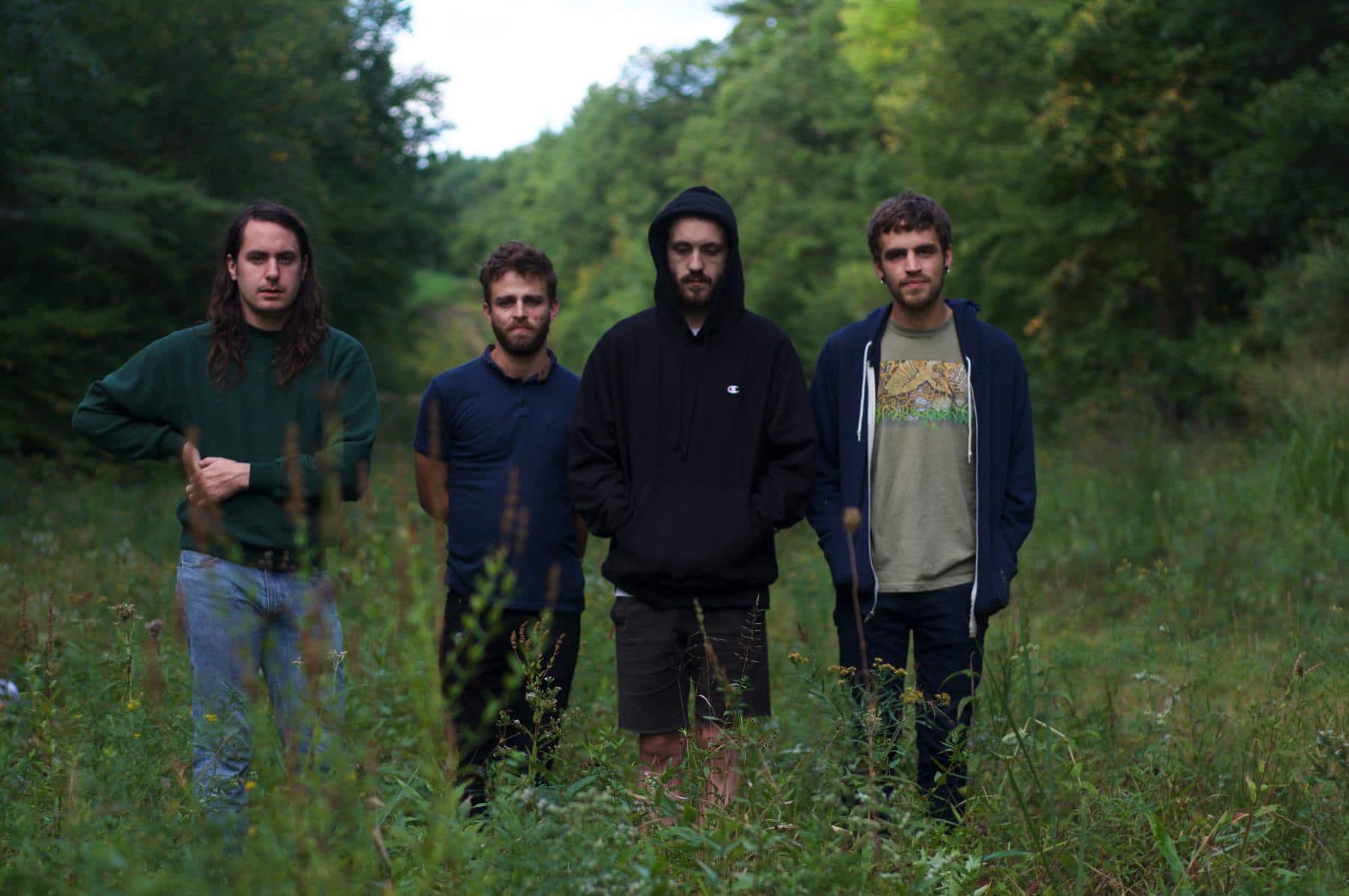 Follow-ups can be tough – especially if your last record was as highly praised as The Hotelier‘s 2014 release Home, Like No Place Is There – but the Massachusetts-based rock band came back swinging with Goodness, a natural sonic progression that finds the four-piece commenting on youth, change and love through a lighter and much more positive lens. We chat with bassist and frontman Christian Holden about fearlessness, inventing new song structures and the uphill battle of becoming a better storyteller.

It comes in different ways. In a lot of ways it’s very unstructured. For the Hotelier, the first record we ever wrote, It Never Goes Out, was a record that was almost entirely collaborative. We’d practice and work out instrumentation, and then I would work out melody and lyrics over that stuff. A lot of the songs were maybe more personal, or sometimes a little bit more explicitly political. There was a little bit of messing around with storytelling writing, and then Home and Goodness sort of had their own development of that, where I was playing around a little more with arcs and narrative arcs. Now I guess the songwriting process is mostly thinking about an entire narrative arc for a record and then wait for songs to come, because it’s really unstructured. If you see narrative arcs for books, and how they sort of climb to a climax and then drop and lead you out, it’s sort of a similar thing as far as the dynamics of the songs and the energy that is going into the songs. I’ll just mess around on the guitar until there’s something that’s happening that feels like it has a direction. I think a lot of what my learning to write songs has been is listening to so much music as a kid and thinking about all the working parts of songs, knowing when a song has a lot of potential, and then knowing how to develop it into whatever it’s supposed to be. I think that’s what a lot of songwriting has been for me, just waiting for something to come and allowing it to go in the direction that it feels that it naturally would.

Do you usually come up with guitar parts first, or do you often have a lyrical idea that starts something?

Most of the time it is instrumentation first. Maybe I’ll have an idea for a song I want to write, or a story I want to tell, and then later I’ll find a [lyrical] story that it works best with, but for the most part its the instrumentation coming first and then the melody second. The melody sort of allows for the lyrics to fall into blocks of syllables, and then I fill in the blocks with lyrics and tell the story in a more structured way.

How much of your lyrical content comes from your lived experiences versus stories you make up or are trying to tell?

It’s different each time. On Home it was probably 85% lived experience. Most of the songs are either lived experience or storytelling, and not a mixture of the two. There’s only one song on the record that I consider to be a mixture, which is “Your Deep Rest”. But Goodness is almost entirely a record of lived experience and storytelling in almost every single song. While there’s a lot of lived experience, we’re approaching it from a more abstract way. It’s a little bit more than just a concrete telling of what happened. [I was] messing around with the ideas, feelings and imagination that the situation provides.

Do you think songwriting gets easier or harder as you go along?

I think I have higher standards. If I’ve written a song in a particular structure, I have a harder time. I challenge myself to physically stay in this mode where if I don’t really love a song I won’t release it to the world. As I’m writing these songs, I’m figuring out how songwriting works and how structuring and melody works. I need a little bit more in order to love a song. In that way, it gets a little more challenging, finding music to bring. It’s always sort of a process of challenging myself as I develop my songwriting in a way that keeps it fresh for me. And then also becoming more challenging- Like if I were writing some of the songs I’m writing now, like the ones I was writing for Goodness, when I was 18, it would have been a much more confusing process. So it’s always getting better but it’s a continued challenge if you quantify it.

I really have to write from a point of view that is fearless and confident in myself and what I am trying to portray. There’s a critique that people that are passive listeners in music – they’ll take something and boil it down to what is being done. An example of that is the poem in the beginning of Goodness. Some people think the poem is boring, and they don’t like it in that way, or think I’m trying to be profound or something and it falls short, whereas when I was writing I wanted a really plainly worded poem that doesn’t do much in the way of being profound or being deep. I just wanted a really plainly worded beginning to the record that was spoken-word and tied up some of the themes of the record. You have to sort of just trust your ability, trust your intent, and always write from a place that is meaningful to you. Then it just doesn’t matter when people don’t get it, because in the end it’s your work, and it doesn’t matter too much what other people think of your work when they’re digesting it from a different angle. I mean, it matters in that the work is a public work, and it belongs to everybody, and it is available to that scrutiny, but I do think in my music, the parts that are corny, or could be seen as corny, I also think they’re things that have validity to them in songwriting.

Which song on this album are you the most proud of?

Lyrically, and conceptually, I was pretty proud of “Soft Animal.” I haven’t really seen anybody that gets it yet, in the way that I understand the song, or what I was going for. I’m really proud of that song. “Sun,” as far as song structure, was something I was really stoked on as well. Something I was really messing around with was the chorus – I wanted to slow it down and make the listener sort of work when listening to the music. We are a pop band, and that’s a component of pop music – that the listener isn’t forced to work too much. The chorus usually comes very quickly and is usually the height of the song, so the listener knows what to expect. When we’re working within the frame of pop music, making the listener work is sort of a difficult thing. They listen to it expecting to hear a catchy song but hear a song that’s very plain, and the chorus is very dull, but there’s a payoff at the end. I feel like what my intended goal was with “Sun” and what it came out as is probably the proudest I’ve been of a song structure, but “Soft Animal” is up there too as far as conceptual content.

Growing up, I was a really big fan of Mewithoutyou, I though Aaron Weiss was a really cool lyricist and that their album was really good. I’ve said this recently a bunch, but John K Samson [from the Weakerthans]. I think just for people who think about rock and pop across the board, John K Samson is a really brilliant songwriter and writer. There are a lot of bands that we are peers with that I think make really interesting music, like the Sidekicks and my friend Michelle [Zauner] who does Japanese Breakfast. We’ve done a good job of surrounding ourselves with really great songwriters, which I am really grateful for and stoked on. Even on this tour, there are nine or 10 songwriters that make their own work and all of it is stuff I think is really good. We are super lucky to be surrounded by people that are making challenging work.

Are you ever able to do any writing on tour, and if so, do you have any tips for people who may find that difficult?

I’m one of those people who find that difficult. I can’t do that. I think it’s so hard because, for me at least, writing music revolves around the landscape you’re in and interacts with the landscape it comes from really intensely. If you listen to a lot of music you hear it in more and more stuff. It becomes really inherent. [For some] musicians that come from a more rural background, the music is very pastoral, and they appreciate silence more. [On tour] the landscape is constantly changing and the vibe is really busy, so unless you’re a really eclectic songwriter who deals with a lot of different styles, it would be really hard to write and have a synthesis to your body of work that you usually do. I’m sort of a really passive songwriter. I think a lot of people I talk to are able to just sit down and write a song, but I take my time a lot. The Hotelier stuff is, like, everything I’ve written, with the exception of some ideas that didn’t make it to full songs. I take songwriting at a really slow pace, I think.

Outside of songwriting, do you do any other kinds of writing? Or have you tried?

I’ve messed around with some stuff. They’re are all projects nobody’s heard. I’ve messed around with some poetry stuff, and some audio zine making stuff. An idea I had was to make an audio zine podcast that was a lot of writing, interviews with other artists, stories and noise, like sound collage stuff. I’ve done some writing for that, just some stories, but nothing I’ve ever released or am anywhere close to having finished.