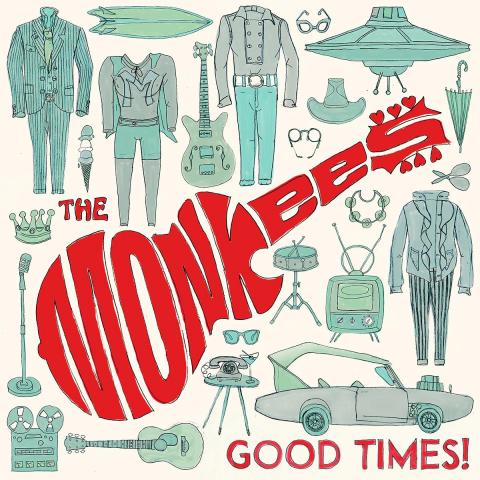 The Monkees
Good Times!
(Rhino)
Rating: 3 out of 5 stars

Is this the “Last Train to Clarksville”?

The appropriately titled Good Times! is a stitched together, Frankenstein-styled collection intended as much to have a new CD to sell at the merch stand when The Monkees hit the sheds for their 50th anniversary tour, as to recap and perhaps bring closure to an intermittent, decades long career arc.

The first “new” Monkees album in 20 years consists of some songs written specifically for the trio– now down to Mickey Dolenz and Peter Tork with occasional input from Michael Nesmith along with Davey Jones making a guest appearance from the grave—by writers such as XTC’s Andy Partridge, Death Cab for Cutie’s Benjamin Gibbard and Weezer’s Rivers Cuomo. Add a handful of tracks recorded and abandoned in the band’s late 60s heyday buffed with new vocals and instrumentation and a few fresh group-penned originals for a disparate batch it would be tough for anyone to assemble into anything cohesive. Fountains of Wayne founder Adam Schlesinger who produces, mixes, contributes a song and plays various instruments, gets the unenviable task of organizing these somewhat incongruent performances into a unified whole. All things considered, he does a reputable job.

The disc is frontloaded with its catchiest and most interesting selections. The opening foot tapping, title track rocker, recorded primarily in 1968, has Dolenz trading lead vocals with its now deceased writer Harry Nilsson. Partridge’s “You Bring the Summer” isn’t one of his most memorable compositions but it captures the pure pop, freewheeling Monkees spirit. The same applies to Cuomo’s “She Makes Me Laugh,” as catchy a tune as this album has and along with Schlesinger’s “Our Own World” one of the few to feature all three vocalists harmonizing on the chorus.

While it’s admirable that both Tork and Nesmith cranked out one new original each, both the former’s tepid “Little Girl” and especially the latter’s “I Know What I Know” (a piano ballad that sounds more like a Barry Manilow B side) drag down the proceedings. That’s also the issue with what should be an interesting collaboration between Brits Noel Gallagher and Paul Weller on the intriguingly titled “Birth of an Imaginary Hipster.” The song unsuccessfully tries to combine the Monkees’ Head-era styled psychedelics with dreamy pop but sounds both overcooked and unfinished. Tork takes lead on an amiable if subdued overdubbed 1968 version of the King-Goffin Dylan-esque gem “Wasn’t Born to Follow,” a tune the Byrds already owned even back then when they released it a year earlier. It seems included to highlight The Monkees’ valid connection to folk rock.

Elsewhere Jones’ resuscitated vocals on 1967’s “I’m a Believer”-ish Neil Diamond penned “Love to Love” is a splendid reminder of the youthful charm he brought to the group and one of the disc’s unexpected highlights. Even better is Gibbard’s “Me & Magdalena,” a Nesmith/Dolenz co-lead vocal that is as sweet, lovely, hummable and delightful as anything in the Monkees’ catalog.

Even with the slight stench of commercialism tainting this release, and some sub-par material Good Times! exudes enough, well, good times to capture what made the Monkees so much better than their teeny-bopper peers and maintained a dedicated fan base for five decades. If this is their final recorded bow, at least they’ll go out in style.