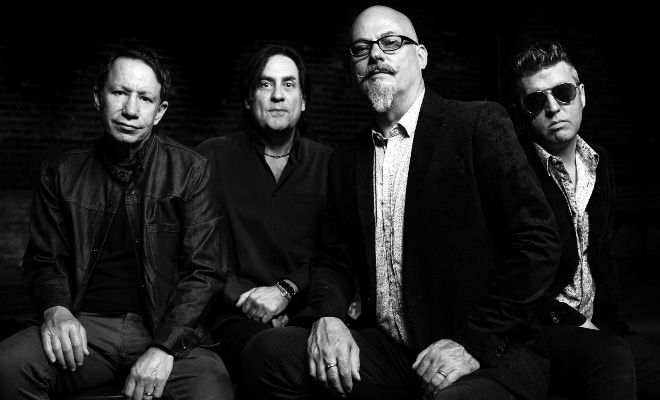 The Pedaljets Release “Uncounted Heads” In Advance of New Album

The sound of Kansas City rockers, The Pedaljets has changed a lot over the 36 years since their formation and on February 14th it is putting out ‘Twist The Lens’,the bands second new record since reforming in the late 2000s. It is a more expansive, less genre-restricted departure from what they describe as the “scuzzy, melodic jangle pop” of their early years.

Premiering today, the newest single “Uncounted Heads” is the sonic equivalent of a song traveling through a prism that refracts its influences into a colorful gradient leaving each listener able to pick from an endless string of influences, but pleasingly composed and possessing just enough personality to stand strong on its own.

Pedaljets frontman Mike Allmayer told American Songwriter “Uncounted Heads” is about “self-imposed exile.” It features verse like “We’re all strangers with basic needs/ The need to be forgotten/ The need to be deceived” and resonates today when the constant onslaught of information we encounter encourages retreat and the relative quiet that comes along with unplugging.

Allmayer expresses the desire to be forgotten as transformative, and a positive way to seek refuge. “A refugee “needs” their oppressor to forget them, to not follow. In that case, being forgotten would be a new start.”

Musicians like The Pedaljets, who’ve been working together for decades, have a millennial lifetime of experience to draw from through time together and tours with the likes of The Replacements, The Meat Puppets, and The Flaming Lips.  “Uncounted Heads” is the work of a band that clearly has put in the work long enough to be able to craft a song that drives along with a comfortable and soothing energy, kind of like a bear hug.

The song achieves what rock is probably best suited to do in 2020 by acting as a nostalgia blanket of sorts, transporting the listener back to a simpler time when rock had a significant presence on the charts and Twitter didn’t exist.

Before Allmayer took “Uncounted Heads” to his bandmates he described it as “much slower and more melancholic,” and said, “this song is the epitome of how a song is transformed for the better through collaboration.”

According to Allmayer, drummer Rob Morrow, “kicked it up several notches with the Beatles/ELO snap beat,” and with Matt Kesler on bass “adding a circular feel,” Mike Dulin on piano inserting a bit of Bach, and Cody Wyoming adding, “a 12-string vintage Danelectro guitar architecture for a vintage jangle,” the song becomes uplifting. The chorus, “You can’t get it right/ Until you’re all right,” in another context could be a lament, but here it’s reassuring. There were other plans to expand the instrumentation, but Allmayer said, “in the end, we left it as is. We liked the unrehearsed fragility.”

‘Twist The Lens’ is out February 14th on Electric Moth Records.