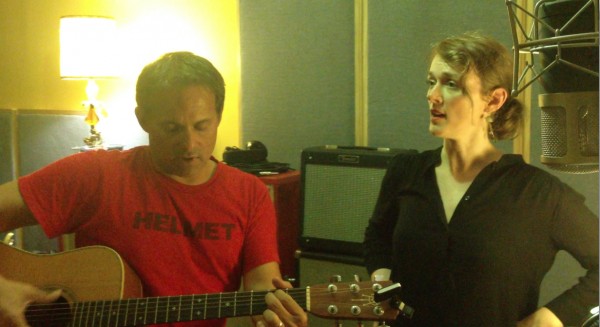 The Sharp Things With Laura Cantrell, “I Know You’re Gonna Break My Heart”

As the president of Good Cop PR, Perry Serpa has handled publicity for some of our favorite artists, from Nicki Bluhm and the Gramblers to Sonic Youth. On his new record with the Sharp Things — the chamber-pop group he’s been fronting for nearly two decades — he adds another A-list artist to his list, trading harmonies with country singer Laura Cantrell on “I Know You’re Gonna Break My Heart.”

A sweeping, shimmering ballad that channels Burt Bacharach and Randy Newman in the same breath, “I Know You’re Gonna Break My Heart” finds the two singers duetting over strings, organ, and casual percussion.

“If you listen to the full album, Green Is Good,” Serpa explains, “you might wonder why the hell this song ended up on it. But then, the rest of the record doesn’t seem to make much sense, either. I wrote this song a while ago. Unlike most of what I write, I felt no immediate compulsion to throw it in the trash, so I thought there must be something redeeming about it. In fact, a few years back, I went down to Nashville to peddle it around to some of the publishing folk down there, thinking, “Well, it kinda has a bit of a country thing going on,” but no one agreed, so I figured either I have no idea what country music is, or they don’t. It’s probably me, to be honest.

“I was thrilled that Laura agreed to sing on the song. I’ve been a fan of hers for years, so it was a special evening and she made the damn thing.”