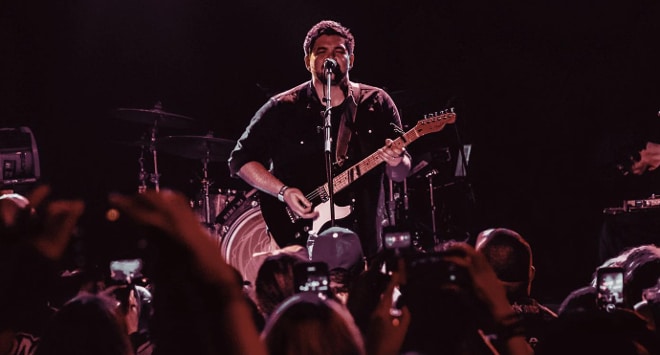 Nick Thomas knows how to write a damn good breakup song. As frontman of The Spill Canvas, he penned two anthems that brokenhearted teenagers quoted in their AIM away messages during the mid-2000s emo craze: All Over You and All Hail the Heartbreaker.

Over a decade later, those teens are all grown up, but they still remember every lyric when Thomas takes the stage at Rough Trade NYC on Saturday, December 7 to celebrate the band’s fifteenth anniversary.

“It’s a little grandiose,” Thomas told American Songwriter about Sunsets and Car Crashes, the title track of The Spill Canvas’ debut 2004 album, which is just him and his guitar. “That was a love song for— I can’t remember who at this point. To play it now is crazy, because I’ve been married for four years. I like to think that in some way, some of those songs were meant for my wife, Sarah, because I never thought I’d get married ever, like no one’s going to understand how to deal with my bullshit.”

Thomas, now 35, was around 17 when he started The Spill Canvas — “My frontal lobe wasn’t even developed,” he said — and built a fanbase that’s remained loyal through multiple lineup and label changes. For 2019’s Decade & A Half tour, he revamped old acoustic songs to play with today’s full band: guitarist Evan Pharmakis, drummer Bryce Job, bassist Landon Heil, and Geoff Black on keys. For example, Thomas “chopped the fat” from So Much, which originally clocked in at nearly six minutes.

“Some of the most strenuous moments in my songwriting life were when I was trying too hard or thinking about it too much,” he said. Before taking up songwriting, he wanted to write short stories, and those narrative plots bleed into his music. The Tide and Self-Conclusion include back-and-forth dialogue and introduce characters you can picture in your brain as if you were reading a book. “I always loved the little twist at the end of short stories, like oh wow, that was crazy,” he added. This is why both songs, or stories, have such unexpected final verses. (You’ll have to listen for yourself to find out what happens.)

Now The Spill Canvas is opening a new chapter. Years after releasing 2012’s “Gestalt” via Kickstarter, they’ve independently recorded their sixth LP and are shopping it to labels with an expected release date of spring or summer 2020. “We figured one more time to try before we get too old,” Thomas said, crediting events like Emo Nite LA for helping bands like them “stay relevant” and “reach new fans” as they release new projects.

Thomas emphasized that mental health will be a “big part” of what comes next for the band. Onstage, he opens up about experiencing auditory hallucinations and living with schizoaffective disorder, which he defines as “the best of schizophrenia and bipolar.” The sold-out Brooklyn crowd breaks into applause at his announcement, appreciating his honesty.

“Being a songwriter, I thought I knew what was going on in my head,” Thomas said. “I was like, I have this under control, I don’t need to see anybody… but that’s not what you’re supposed to fucking do. You have to go get help, because you’re not alone, and I promise you, it will change your life.”

And then he strummed his guitar, ready to kick off the next song.

The Transformation of Chase Rice: ‘It’s About the Music Now’

0
Chase Rice has never been one to be overly dramatic. But to say that he went through a total life transformation just...
Read more
Best New Music

0
In February 2015, Bre Kennedy picked up, packed up and drove cross country from Los Angeles to Nashville find herself. She was...
Read more