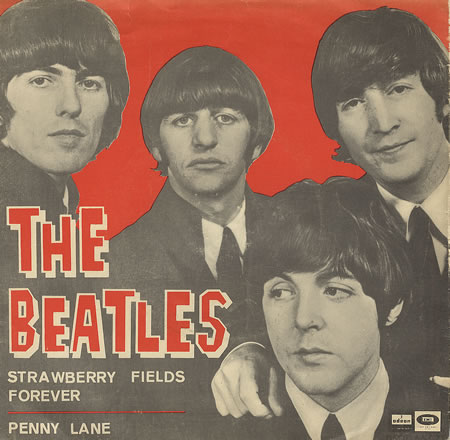 Like “She Loves You,” “Strawberry Fields Forever” begins with a chorus rather than a verse. However, the two songs are so different that it’s hard to believe they were recorded by the same band. While “She Loves You” jump-starts into signature earlyBeatles pep, this song drops listeners right into the dreamy sounds of the Sgt. Pepper-era band. “Strawberry Fields Forever” is a textbook psychedelic rock tune- Paul’s mellotron, George’s swarmandal (an Indian harp), and John’s inventive lyrics make for an experimental masterpiece. With nostalgia seeping through every lingering note, the song emanates feelings of home, but not without some insecurity, which creates the perfect amount of musical tension.

While originally intended to for the Sgt. Pepper‘s album, the song was initially released as a single. Though it never attained #1 status, the song’s mellifluous melody is the product of both innovation and seriously hard work. “Strawberry Fields Forever” was tinkered with, dubbed, and spliced more than any other Beatles song. The band and producer George Martin reportedly spent no less than 55 hours in the studio on this psychedelic tour de force. The result, it would seem, was well worth the effort.

John came up with the concept while somewhat homesick. Having endured a marathon tour and a rocky relationship, John saw this composition as therapy, saying “Strawberry Fields was psychoanalysis set to music.” Named for the garden of a Salvation Army home in his native Liverpool, the lyrics capture the playful mental wanderings of a child. Some would say that John’s experimentation with LSD tainted the song, but the composite of his experiences allowed him to write a tune that he would later consider “one of the few true songs I ever wrote.”