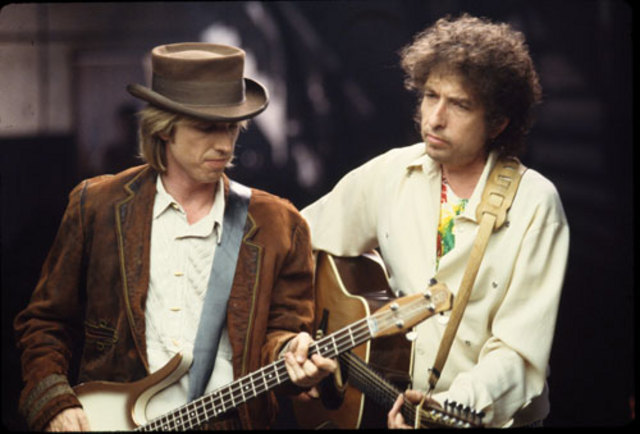 To the untrained ear, there’s not a ton of difference in the “thin, wild, mercury-sounding” vocal stylings of Tom Petty and Bob Dylan. The two songwriters go way back; Petty and The Heartbreakers first backed their hero on tour in 1986. In 1988, Petty and Dyan found themselves working under a new arrangement — as “Charlie T.” and “Lucky” Wilbury in the once-in-a-lifetime supergroup Traveling Wilburys. The other members were Roy Orbison (Lefty), Jeff Lynne (Otis), and George Harrison (Nelson). Not a bad little combo.

Related: Tom Petty On His Relationship With Bob Dylan

Although it was never released as a single, one of the standout moments of the band’s debut album Vol. 1 is “Tweeter & The Monkey Man,” a Bruce Springsteen-baiting crime story with lead vocals from Dylan. The Springsteen song title references in the lyrics — “Mansion On The Hill, “Thunder Road,” “Factory,” etc. — are only half the fun. The rest comes from the winding narrative (“The undercover cop pulled up and said everyone of yous a liar/ If you don’t surrender now it’s gonna go down to the wire”), set deep in the swamps of Jersey.

Lately, Petty has been busting out “Tweeter & The Monkey Man” on tour, performing it during his run at New York City’s Beacon Theatre and this year’s Hangout Fest.

I like that song a lot. We’ve done “Handle With Care” and “End of the Line” before. One of us said, “Are we going to do a Wilburys song?” We said, “Let’s not do one of those. How about something else?” And Tom said, “How about ‘Tweeter and the Monkey Man?” I remembered the title, but it took until he played the chorus for me to remember how it went. But then it all came back to me, and we played it a few times. The band loved it.

Watch Petty and The Heartbreakers perform “Tweeter & The Monkey Man” at Beacon Theatre below.