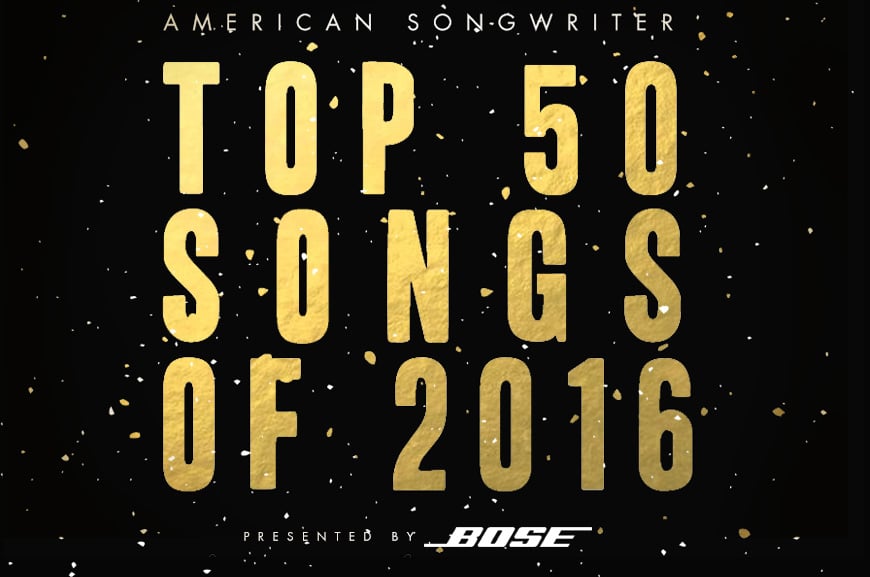 This year’s edition of American Songwriter’s Top 50 Songs is presented by Bose.

Listen along on our Spotify playlist.

Calling your song “Masterpiece” is a bold statement, but Big Thief get closer than you’d think on the title track to their debut for Saddle Creek Records. Against a backdrop of beautifully ragged guitars, frontwoman Adrianne Lenker describes what sounds like a late-night bar crawl, always one drink ahead of loss and grief: “There’s only so much letting go you can ask someone to do.”

49. Felice Brothers: “Jack at the Asylum”

Every Felice Brothers song, in some way or another, has been about the American Dream, the idea of assembling yourself from the castoffs of the past—in their case, Dylan and the Band and Woody Guthrie and every forgotten troubadour with a guitar. On this standout from Life in the Dark, that dream curdles into a feverish nightmare, full of prairie surrealism and allusions to Hiroshima and the murder of labor activist Joe Hill. The inmates, in other words, are running the asylum, if not the entire nation.

Oh sure, the famed Marfa Lights are probably nothing more alien than car headlights or campfires in the distance, but sometimes it’s reassuring to believe in something otherworldly. Plus, they make a fine metaphor for reckless love on this song from ex Sons of Fathers frontman Cauthen, who sings like he’s spent days out wandering the wild Texas desert. The guitars sound like sparks off a campfire, as this Louisville singer-songwriter takes in the world around her: the dogs at the end of their leads, the birds migrating south, the crisp crackle in the air, summer slowly fading into a Midwestern autumn. “Fire warms and fire burns, now I’ve learned the cost of the cold.”

On an impossibly tender gender-swapping ballad, this Birmingham, Alabama, soul act toggle the traits typically associated with men or women, with St. Paul Janeway (not actually canonized, but give it time) lending gospel testimony to the different ways we can rescue and support and, sadly, leave each other. When he declares, “I’ll be your woman,” it sounds like a monumental act of empathy and compassion, proving that soul music doesn’t need a revival with bands like the Broken Bones around.

Coming up through the cloistered English folk scene, this north London duo have filled their repertoire with songs dating back centuries, but Overnight, their Rough Trade debut, is their first album to feature primarily originals. Clarke has been holding out, with a lyrical style as luminescent and melancholy as her voice. On “Nine Times Along” she describes the wax and wane of a relationship against the lunar cycle and the gentle current of Ben Walker’s elegant guitar-work, working from the timeless wisdom that time heals not all wounds.

Forty years after Bowie put it on the map, Berlin still exerts considerable power of romantic musicians and music fans, but this Texas-by-way-of-Brooklyn-and-sometimes-in-Berlin band of ex-ex-pats understand that you can going halfway around the world and still be stuck in your own skin: “You can’t crop yourself out of the picture, out-of-focus but still framed inside.”

Less a song than a memoir set to music, “Take Us Back” allows Mavis to reminisce on her start in the family band, crediting the Staples’ success to friends and family and “all the people who love me.” But it also recalls a time when music could motivate listeners to change their world—a lesson we need now more than ever.

Charles Bradley writes extemporaneously, making up lyrics while singing along to pre-existing funk instrumentals by the Menahan Street Band, a process that lends his songs a sense of urgency and surprising insight. This jam from his remarkable Changes makes clear that the secret to his immense empathy—and possibly the source of soul music’s unique power—is this deeply flawed yet ever-inspiring country we live in.

Anohni grabs one of the least debated serious issues facing America during the Obama era—drone warfare and the indiscriminate killing of civilians alongside combatants—and adds stomping beats and glossy production courtesy of Hudson Mohawke and Oneohtrix Point Never. It might sound exploitive, even facetious, if she didn’t make the juxtaposition between the disco sheen of the music and the viscera of bodies violently blown apart. She has explained that the song is sung from the point of view of a young Afghani girl demanding the U.S. obliterate her, but there is something incredibly sexual about the song that overwhelms that story: “Blow my head off, explode my crystal guts!” Nine months after its release, we’re still wrestling with the implications of this song.