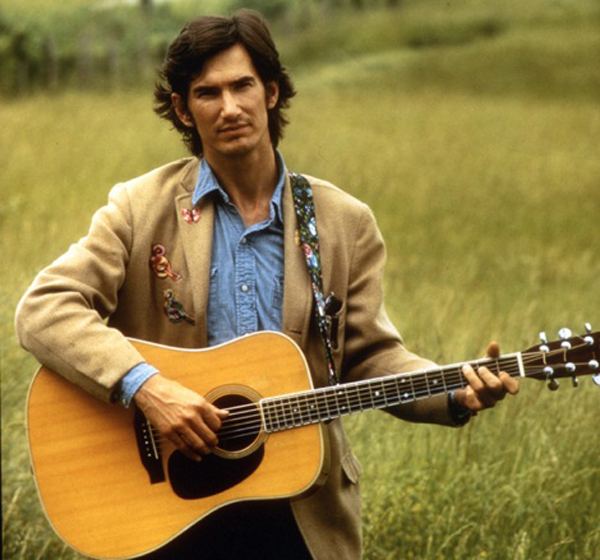 He had the temerity and mordant sense of humor to name his 1972 album The Late Great Townes Van Zandt a full quarter-century before he actually shuffled off this mortal coil on New Years Day, 1997. Then again, Townes Van Zandt always zigged when everyone expected him to zag, in his life and his songwriting.

That album contained “Pancho And Lefty,” perhaps his most enduring and well-known song in a career that was more impactful in terms of its influence rather than its popularity. Van Zandt’s songs often became widely known only when someone would do a cover version of them, such as when Willie Nelson and Merle Haggard made this song a #1 country hit in 1983.

Better to stick with Van Zandt’s original, where his woebegone voice fills in all the emotional blanks left by the quirky narrative. The title immediately suggests an outlaw song, and that’s what it is in the most basic sense. Yet it becomes something more profound as it wears on, a subtle meditation on life and death, friendship, and the consequences of the choices we make.

Pancho is a legendary bandit, although, as Van Zandt stated in an interview with Paul Zollo in Songwriters on Songwriting: Expanded Fourth Edition, not a historical one: “The only thing I remember thinking about while I was writing it was consciously thinking that this was not about Pancho Villa.” He’s a feared gunslinger, but he ends up on the noose once the federales get a hold of him (“They only let him hang around/Out of kindness I suppose.”)

Lefty is his sidekick, or at least that’s what we assume. In the interview with Zollo, Van Zandt mentions that even he was surprised by the vagueness of their relationship: “Also a friend of mine who is an artist pointed out one time that there’s nothing in that song that says Pancho and Lefty ever knew each other. I had never thought of that.”

A popular interpretation of the song has Lefty selling out Pancho to the federales; they point to lines like “He only did what he had to do” as evidence of this. I’ve always resisted that take. To me, Lefty is the flipside of the live fast/die young ethos, someone who may not have the gunfighting talent of Pancho but manages to eke out an existence nonetheless. Van Zandt also wants the listener to question which fate is better: Pancho’s glorious death (“The poets tell how Pancho fell”) or Lefty’s drab life in the very un-Old West town of Cleveland.

All of their exploits are framed by an interesting opening verse in which the narrator addresses the outlaws about the dangers of choosing the hard life: “Living on the road, my friend/Is gonna keep you free and clean/Now you wear your skin like iron/And your breath’s as hard as kerosene.” You get the feeling that Van Zandt could have been describing himself with those telling lines.

Whatever your interpretation, it’s impossible to deny the allure of “Pancho And Lefty.” The tale might seem on the surface like an elegy for two outlaws, but, with the inimitable Townes Van Zandt’s telling it, it says a lot about me and you.

Living on the road my friend,
Is gonna keep you free and clean.
Now you wear your skin like iron,
And your breath’s as hard as kerosene.
You weren’t your mama’s only boy,
But her favorite one it seems.
She began to cry when you said goodbye,
And sank into your dreams.

Pancho was a bandit boys,
His horse was fast as polished steel,
He wore his gun outside his pants,
For all the honest world to feel.
Pancho met his match you know
On the deserts down in Mexico,
And nobody heard his dying words.
Ah, but that’s the way it goes.

And all the Federales say,
They could have had him any day.
They only let him hang around,
Out of kindness, I suppose.

Lefty, he can’t sing the blues
All night long like he used to.
The dust that Pancho bit down south
Ended up in Lefty’s mouth.
The day they laid poor Pancho low,
Lefty split for Ohio
Where he got the bread to go,
There ain’t nobody knows.

And all the Federales say,
They could have had him any day.
They only let him slip away,
Out of kindness, I suppose.

Well the poets tell how Pancho fell,
And Lefty’s living in a cheap hotel.
The desert’s quiet and Cleveland’s cold,
And so the story ends we’re told.
Pancho needs your prayers it’s true,
But save a few for Lefty too.
He just did what he had to do,
And now he’s growing old.

And a few grey Federales say
They could have had him any day.
They only let go so wrong,
Out of kindness, I suppose.

A few gray Federales say
They could have had him any day.
They only let him so wrong,
Out of kindness, I suppose.