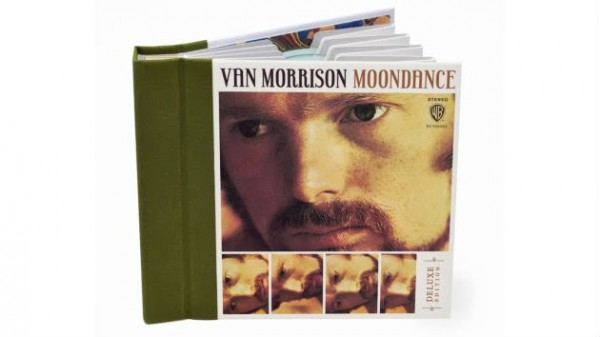 Deluxe? Sure. Necessary? Probably not.

Expanded, overhauled and otherwise overloaded, this five platter, beautifully appointed and annotated Moondance set is the very definition of bloated. It features three packed discs of outtakes, rehearsals, mono remixes, working cuts and the like, most never meant to see the light of day. It’s very much like watching the sausage being made.

Van Morrison’s second album, released in 1970, two years after his artistic classic but commercially disappointing Astral Weeks, is a tighter, more R&B and in its title track, a jazz oriented career milestone. It sharply finds the sweet spot between the mystical impulses that would drown his later projects and taut, tightly arranged songs.

In its original, and here remastered, 10 track format (a somewhat superfluous if clean 5.1 remix, audio only DVD is also included), it’s every bit as memorable, timeless and nearly as entertaining if not quite as challenging as Astral Weeks. Songs such as “Caravan,” “Into the Mystic,” “And it Stoned Me,” “Crazy Love” and “Moondance” sound as fresh, inspired and hummable today as they did a whopping 43 years ago. There just aren’t many albums with that kind of staying power.

But hearing so many working versions of these songs can be a trying, time consuming yet occasionally enjoyable experience. If you’re one who rightly questions whether you’ll ever want to play all 11 previously unreleased takes and a different mix of “Caravan” or 12 of “Glad Tidings” more than once, then you’ll probably want to pass on this just-in-time-for-Christmas package. While there are some revelations in the 50 heretofore unheard tracks– not least of which a tough, rocking 11 minute rehearsal of “I’ve Been Working” that shows how this band could find a groove and prompt Morrison to his most guttural performance– plowing through them all loses some of the magic of reveling in the sheer joyousness of the final versions.

Morrison has been adamant in his opposition to this barrel scraping reissue and his typically curmudgeonly trait might be on target. For those who haven’t heard the original yet, Moondance remains a singer-songwriter archetype that’s a vital part of any serious music lover’s collection. Whether you want to go full Monty with this overstuffed package depends on your level of dedication to one of Morrison’s undisputed artistic triumphs.

(The reissued Moondance is also available in single and double disc configurations with less material.)