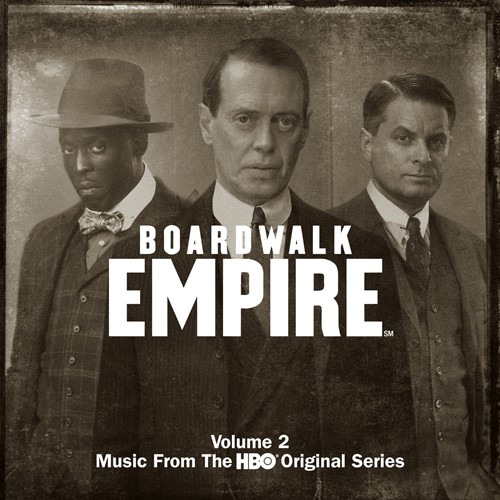 Forget for a moment the popularity and critical acclaim that the HBO series has garnered, and focus on the music that adorns the series. That is what the release of two soundtracks, Volume 2 being released this week, asks us to do. Fortunately, the show’s musical supervisor, Randall Poster, is steadfast in his approach to bask in the fruits of the great music of the 1920s, instead of trying to cross-pollinate eras nearly 100 years apart as Baz Luhrmann tried to do with The Great Gatsby soundtrack. Gatsby might sell more, but Boardwalk Empire is a much more rewarding listen and pays a greater respect to its era.

Much credit is due to Poster and the rest of the show’s producers involved in its musical escapades. The set proves that it is possible to mix modern day artists with sounds from a bygone era. The trick, or lack thereof, is that you have to present them in the context for which they were written: in their maiden style. The lion’s share of credit may be given to the artist’s singing the material – and there are certainly respected names whose talents grace the disc (Elvis Costello, Rufus Wainwright, Patti Smith) – but the glue that keeps the whole thing together is the impressive abilities of Vince Giordano & The Nighthawks who provide the musical backdrop for every track in the collection.

As talented as the singers are, few of them would sound entirely plausible if a time machine existed and they were to record in the 1920s. That’s not to say fantastic vocal performances don’t abound on this set. David Johansen (a.k.a. Buster Poindexter), Liza Minnelli, Leon Redbone, Pokey LaFarge, Chaim Tannenbaum, and Margot Bingham turn in the best performances here. However, Giordano and his entourage (totaling 31 musicians!) sound entirely of the era, an astounding feat.

Modern day artists have devoted albums (Diana Krall) and careers (Pokey LaFarge) to the various musical styles of the 1920s, and this collection further bolsters the quality of music from the Roaring Twenties. Writers like Kahn, Hammerstein II, Kern, and Berlin were masters at popular songcraft, weaving lovely lyrical vignettes amidst creative musical arrangements and employing a wonderful array of interplay between a gamut of instruments, a far cry from many of today’s celebrated songwriters who rely on celebrity and catchy hooks to carry their tunes to the top of the charts.

Presented on this second volume are 20 tracks (iTunes also contains an additional 3 tracks) that allow us to hear what our grandparents heard generations ago minus the crackle. The only complaint is that a deluxe edition (for either volume) wasn’t released to include a second disc devoted to the song’s original counterparts for comparison’s sake, but that’s why the reissue market exists. Regardless, don’t let that minor quibble ruin your chance to enjoy some great music that has stood the test of time. Even if they may sound dated, there’s a reason these tunes are collectively considered as additions to The Great American Songbook.