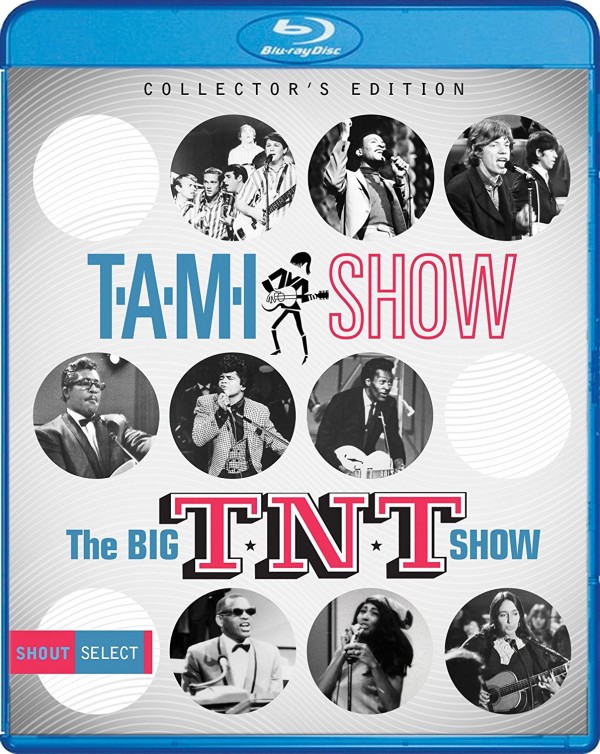 Anyone seeking to understand the spirit of America circa the mid-60s only has to experience this double DVD to get a dose of the vibrant cross-section of music and fashion that defined that time.

These two black-and-white feature films attempted, and in large part succeed, to capture the spirit that defined American teenagers at a more innocent period, albeit one in which the country was caught up in the Vietnam struggle and civil rights were just starting to take hold. Thankfully, both the T.A.M.I. (Teen Age Music International) Show and the far less successful or influential follow-up The Big T.N.T. Show, were inclusive of black, white, male, female, English and American acts. The former stuck to rock and roll, pop and soul with the latter adding country — a rather schlocky Roger Miller looks and feels out of place — and pure folk with both Donovan and Joan Baez turning in impressive solo/acoustic sets.

There is no question that the T.A.M.I. Show is the better of the two. With Motown stars the Supremes, Marvin Gaye and Smokey Robinson & the Miracles, along with Chuck Berry and what is by any measure one of James Brown’s most influential performances, representing African Americans, there almost wasn’t a need for headliners the Rolling Stones. And while other bland Brit invasion acts such as Billy J. Kramer and the Dakotas and Gerry and the Pacemakers don’t quite cut it with those heavyweights, white pop stars Leslie Gore and especially the Beach Boys hold their own. The movie was a hit, paving the way for a sequel, The Big T.N.T. Show, which, although it tried and had Phil Spector as on-screen music director, doesn’t hold nearly as much interest as its predecessor.

Still, The Big T.N.T. Show boasted some terrific sets from the original Byrds, Bo Diddley, Ray Charles (with a huge backing ensemble), the Ike & Tina Turner Revue and, somewhat surprisingly, the Lovin’ Spoonful who rip into their two songs with frantic energy. Donovan and Baez adequately handle the folk end, with Baez and Spector (at the piano) joining on a bizarre if interesting version of “You’ve Lost that Loving Feeling.” But Petula Clark, Miller and David McCallum (then from TV’s popular Man from U.N.C.L.E show) as MC and something of a conductor (a combination of waving his hands and semi-dancing) slow the momentum, even with the occasional choreographed go-go dancers around to spice things up. Recent interviews from participants John Sebastian and others as the disc’s extras don’t amount to much either.

Almost as enticing as the music are the cutaway shots to the crowd. They are heavily biased towards comely female teens clearly instructed to treat each act as if it was the Beatles, screaming with a frantic, over-caffeinated response that seems peculiar and forced, but is somehow sweet and charmingly innocent.

The Blu-ray audio remains tinny if more than listenable, compressed and barely stereo. But the video transfer is clean, making this the best available version of the T.A.M.I. Show and the first appearance of both on the Blu-ray format. A 36-page booklet provides in-depth, detailed background information on the creation of both films. It’s an indispensable addition to a fascinating and generally enjoyable historical document that brings this mid-60s time capsule vision of America into your living room.