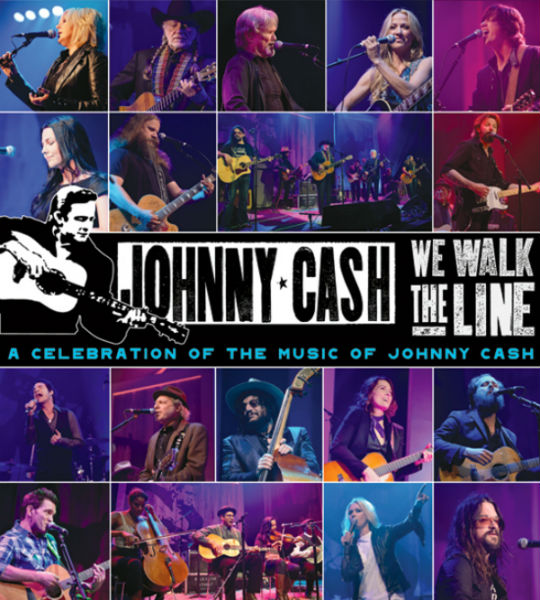 Various Artists: We Walk The Line: A Celebration of the Music of Johnny Cash CD/DVD Various Artists:
We Walk The Line: A Celebration of the Music of Johnny Cash CD/DVD
(Legacy Recordings)
Rating: 3.5 out of 5 stars

This set captures an April 20, 2012 concert at the Moody Theater in Austin, Texas, with an array of high caliber talent taking on a song from the majestic catalog of Johnny Cash (as the bonus features reveal, there was unsurprisingly competition among the artists over who got to perform which song).

As usual with these events, it’s something of a mixed bag. In general, the uptempo numbers fare better, particularly Brandi Carlile in the show’s opening slot, where she delivers a fierce “Folsom Prison Blues.” The Carolina Chocolate Drops turn in a lively romp through “Jackson.” Kris Krisofferson’s “Big River” and Shooter Jennings’ “Cocaine Blues” are also highlights. But Shelby Lynne’s “Why Me Lord” and Pat Monahan’s “Help Me Make It Through The Night,” put a damper on the energy, especially on the CD, where the songs appear in the middle of the set (oddly, the CD and DVD have different running orders). And “I Walk The Line,” performed by all the artists, never really catches fire.

There’s something of a Highwaymen reunion at the show, with Kristofferson joining Willie Nelson, Waylon Jennings’ son Shooter, and Jamey Johnson in performing the country supergroup’s #1 country hit “Highwayman.” But the lineup tends toward more modern performers, such as Iron & Wine, with singer Sam Beam delivering a moving “The Long Black Veil.” Bonus features on the DVD include a rehearsal version of “I Still Miss Someone” by Willie Nelson, a creditable “The Man Comes Around” by the show’s host, actor Matthew McConaughey, and two short films on Johnny Cash and the making of the show.