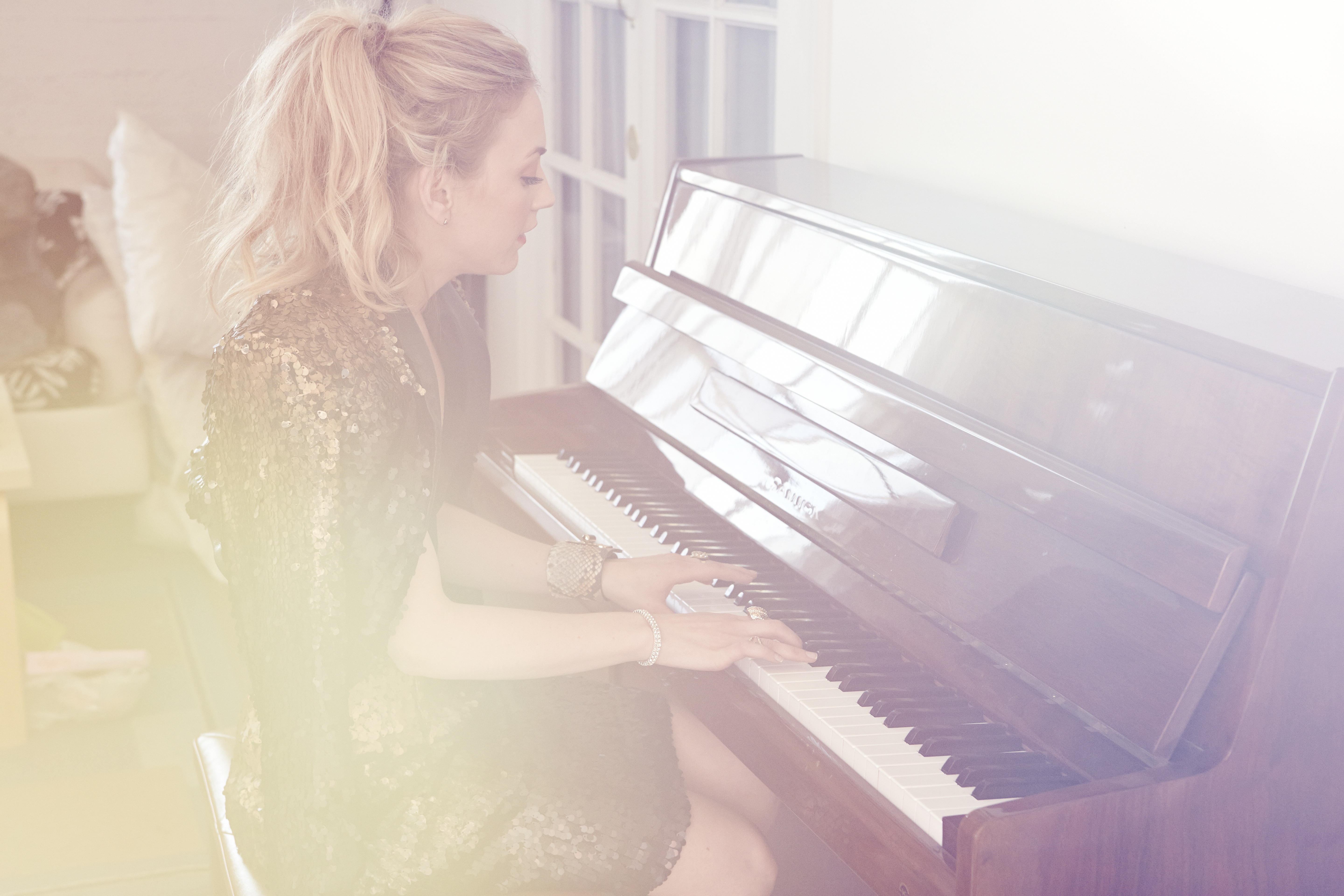 You know her as Beth Greene, one of the mud-splattered, zombie-killing ingenues on AMC’s The Walking Dead. We know her as Emily Kinney, an actress and singer/songwriter whose latest EP, Expired Love, pitches its tent halfway between Ingrid Michaelson’s boy-crazy pop and Regina Spektor’s peppy piano folk. We rang her up earlier this week to talk about tunes, travel, and the undead.

It’s great. I’m in Las Vegas, singing three songs at a BMI convention called “Women in Radio.” I’ve never been to Vegas before, so I’m taking in a lot. It’s incredible. Tonight, there’s a dinner honoring Babyface and some other BMI songwriters.

It must be nice to have some free time between seasons of The Walking Dead.  Do your two jobs — acting and music — require you to tap into different parts of your brain?

What’s cool about music is that I write it. I create it. There can be more pressure with that, because you’re the one responsible for everything. It’s coming from your brain. With acting, it all starts with someone else’s vision, and you fit into that. They hire you for a job. They ask you to play a character. You stay true to the text that someone else has written. Acting and music fulfill different things for me. That’s why it’s fun to come to events like the BMI thing as a songwriter. I get to feel like I can be myself in a certain way. I’m not playing someone else.

Do you ever play someone else in your music, or are the songs always autobiographical?

For my songs, I do start with my own life and draw from those experiences. I’ll use those things as a starting point. Once I start writing, my imagination sometimes kicks in. But generally speaking, I have something that I want to say, and the best way to express it is to put it in a song or a little poem.

Tell me about “Julie,” then. Is that song true? Did the guy stay with Julie, or did he leave her and run away with you?

Currently, I believe he’s still with Julie. But I got this song out of the experience, as well as this t-shirt that says “You + Me – Julie = True Love.” A few times, girls have worn them to my shows, and that makes me so happy. It’s a whole campaign. In real life, I’m not still interested in that person . . . but it’s a good story to tell and a good song to sing.

Expired Love is a pretty emotional EP. Is it easier to wear your heart on your sleeve when you’re singing, as opposed to having that sort of heavy conversation with someone?

For me, when I started writing music, it wasn’t for other people. It was totally for myself. It’s a place where I can be honest and say the things I wanna say. I would never go up to this guy and say, “You should dump your girlfriend, Julie, and be with me instead.” That’s not part of my makeup. But putting it in a song is safe and fun. When I’m going through a breakup or something, it’s a place where I can be really honest, and then I can share it with people who’ve maybe felt the same way. Sometimes, it’s not appropriate — or even useful — to say exactly how you feel. Why call up your ex wife and start a conversation? Why call up Julie’s boyfriend? So the songs aren’t about that, really. They’re reflections. They’re about creating a certain story and putting that story into a little box.

Your music makes a lot of references to New York. Why is that city so inspirational?

I wrote all those songs when I was spending a lot of time in New York, and all of them come directly from my experiences there. I can remember when I wrote each of those songs, and which things sparked each one. New York feels like home right now. I’ve lived there for seven or eight years now. I spend a lot of time just walking around, coming up with poems or songs. The place definitely influences my songwriting.

The Walking Dead shoots in Atlanta, and you’re spending this week in Las Vegas. You seem to travel a lot. Do you find other places as influential as New York?

I can get into a place where I can write songs wherever I’m at. I just need some space to myself. When I’m traveling a lot, you don’t always have that quiet time, where you’re sitting alone in your apartment or walking around the city. To me, that feels like a good time to let my imagination wander, and put phrases together. I do love New York so much, and for me, writing a song is about holding onto a certain moment or a certain aspect of relationship. Even when I’m away from New york, I find myself using it as a backdrop, since it’s a place I love and am familiar with. That said, I was just working on a song called “Never Leave L.A.,” because I’ve been spending so much time in Los Angeles. So wherever I’m at, it ends up in my songs.

Let’s say you’re on the set of “The Walking Dead.” Do you get song ideas there?

Every day is different. There are episodes that don’t really feature me as much, so at those times, I have enough emotional space to be thinking of songs, and to come home from the set and do that with my free time. I also have times where the show is all encompassing, and Walking Dead just rules my life. Obviously, the show is very physically and emotionally demanding, so if it’s been a busy day, I’m spent by the end of it. I’m not gonna home and write a song. I’m gonna go home and think about what I’m doing the next day, so I can be on top of my stuff. Every day is different.