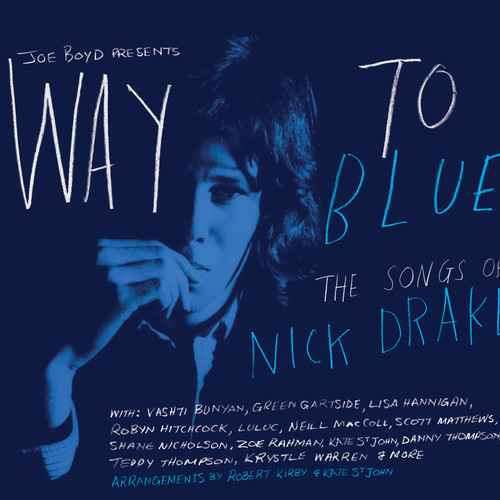 Various Artists: Way to Blue – The Songs of Nick Drake Looking for an album to blast on a beautiful spring day with the convertible top down while cruising down the highway? This ain’t it.

That comes as no surprise to fans of UK folk singer/songwriter Nick Drake’s small but remarkably influential catalog of achingly lovely, hushed acoustic material. An unexpected surge in popularity after his untimely 1974 death only made his existing material resonate more powerfully as the work of a tortured, introspective depressive who seldom performed live due to psychological problems. Drake’s songs have been covered numerous times, but this tribute, culled from a variety of live shows, has the stamp of authenticity due to the participation of Joe Boyd and Danny Thompson, Drake’s producer and bassist respectively.

There are no marquee stars —- the most recognizable names are Robyn Hitchcock, Richard Thompson’s son Teddy and Scritti Politti frontman Green Gartside—yet these versions capture the essence of Drake’s vibe, ever so slightly amping up the sound while highlighting the blues and jazz that underpinned the originals. There is no audience audible yet the live recording brings a tougher edge to the performances, the best of which push and tug at the boundaries of Drake’s music.

It’s not a greatest hits review since the title track is MIA, although “Pink Moon,” notably popularized in a 1999 Volkswagen commercial, closes the program and many of the selections are among Drake’s best-known.  The acoustic audio is meticulously recorded (by Boyd) and the mix of male and female vocalists, along with occasional strings provides variety and a diversity that allows an effortless flow from one highlight to the next. This is clearly a labor of love for Boyd and a wonderful introduction to a tragically flawed but exceptionally talented singer/songwriter.