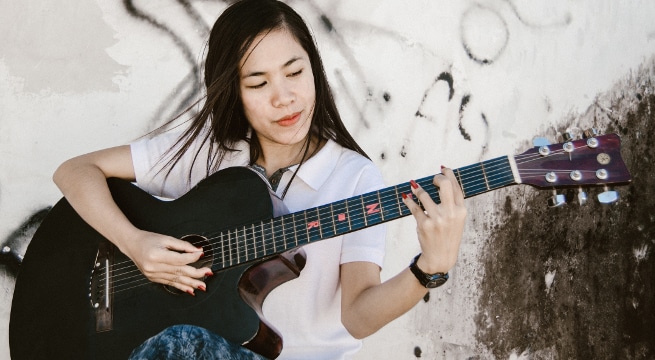 The Eagles recently announced they will play their ‘Hotel California’ album in its entirety on their upcoming tour dates.

Title track “Hotel California” is among the greatest, most recognized guitar tracks of all-time, simply put: it is an epic song demonstrating all the elements of Rock guitar mastery, it regularly tops – or ranks highly in – lists and charts of the best songs, guitar parts and solos ever.

Here are the key elements that make Hotel California the height of rock/pop guitar playing.

The song is instantly recognizable for its significant introduction. As well as establishing the rolling chord progression (more on this below), the use of the 12-string guitar – more often used to create a rhythm guitar canvas than to be a feature part in its own right – creates a distinctive twinkly sound. This means the song is memorable from the first second, and helps to elevate it to iconic status.

Very often, chord progressions are 4 bars long, or sometimes 2 chords, or a static riff. The Hotel California chords breaks this ‘rule’, but does so in a significant way:

Again, this creates multiple effects, including:

Undoubtedly more famous for its guitar solo, the song’s fills are still incredibly significant. Besides the harmony created by the twin guitars as discussed above, they also serve important other purposes.

They contrast with – and respond to – the main vocal line, they fill space and create interest too.

Most importantly though, they represent a lead guitar presence that grows and accelerates as the song progresses, meaning the solo, when it comes, doesn’t feel as though it comes from nowhere. Instead it’s an extension of an idea and an energy that’s already present.

Arguably what the song is most famous for, certainly among guitarists, for whom learning this solo is a significant milestone in development.

It is one of the archetypical rock guitar solos. The reasons why include:

Whether playing the rhythm or lead parts, on 6 or 12 strings, in basic or complex/advanced iterations, there is so much for any guitarist to learn from Hotel California.

Alex Bruce is a writer for Guitartricks.com and 30Daysinger.com