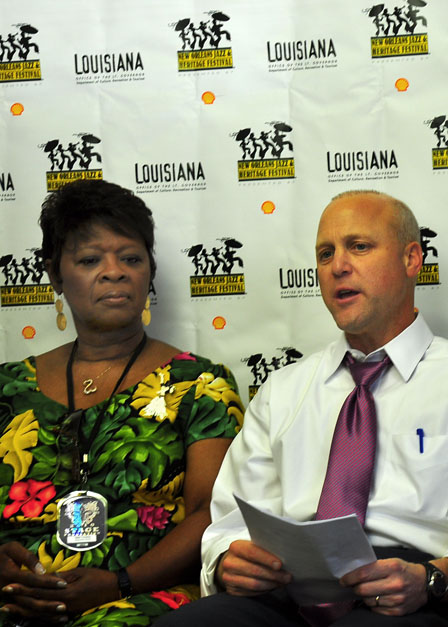 Will New Orleans be the New Musical Capital of the World? Landrieu’s central question for the panel concerned how and why New Orleans and Louisiana have failed to capitalize on their unique culture, music and art, and also why other outside entities have been able to do so.

For Terence Blanchard, a musician with a storied career who also now serves as the Artistic Director at the Thelonious Monk Institute of Jazz in New Orleans, the answer could be found in something Herbie Hancock told him after Hurricane Katrina decimated the city. “New Orleans is the heart and soul of American music,” the seminal Chicago jazz musician told Blanchard. “Whatever New Orleans does, the rest of the country follows.”

Jan Ramsey, the activist and influential publisher of Offbeat magazine, focused on the roles brands play. “The challenge is to take our culture and make the business people recognize what New Orleans brings,” she told the panel. Ramsey cited the ubiquitously referenced HBO series Treme as a good example of ways to expose a new audience to what New Orleans brings. Ultimately, she said, New Orleans’s “resource is culture, not money.”

Outside as the day’s storms began to rage, Landrieu reminded everyone that Jazz Fest is a business—and behind that business are 800 other small businesses: the food vendors, crafts sellers, and the musicians themselves.

Paul Arrigo, the President of the Baton Rouge Convention and Visitors Bureau, told the panel about the process for creating the largest outdoor country festival, Bayou Country SuperFest. The effort brought together the diverse entities of the music indusrtry, sports industry, Lousiana CVB and Lousiana state government. Kicking off its inaugural year in Baton Rouge at LSU’s Tiger Stadium on May 29 and 30, it would seem to be a major win for the state.

But even with successes like Treme, SuperFest and Jazz Fest close at hand, the topic which kept surfacing among the group was why cities like Nashville and Austin have so successfully monetized music and New Orleans, no doubt richer in musical history and with a more embedded musical life in the culture, has failed. Ramsey brought up the importance Nashville places on songs and songwriting, often the driving forces of monetization in the music industry. Nick Spitzer, the host and producer of the American Routes radio program, said New Orleans “needs to focus on quality of delivery.” Similarly, Blanchard pointed to the fact that the large pool of talent in the city needs to be identified as “one brand.”

These points and others were insightful, but none seemed to present the magic bullet answer to how New Orleans would monetize (without commercializing) their music and culture.

The musicians seem to be doing their part, they insisted. Thomas and Blanchard both discussed the strong reactions of fans throughout the country and the world when they bring their distinctive New Orleans style on the road. Perhaps the answer lies not in the insularity of the music and musicians, but rather in the insularity of the music industry in New Orleans. The panel continued to bring up Nashville, the thorn in New Orleans’s side.

With monetizing the music industry firmly on the agenda of Landrieu, it will be interesting to see if by doing more business with the established entities in major music markets like Nashville, Los Angeles and New York, whether New Orleans will find better ways to profit off its art. After all, Landrieu said, “New Orleans is the musical capital of the world. We just don’t call ourselves that.”