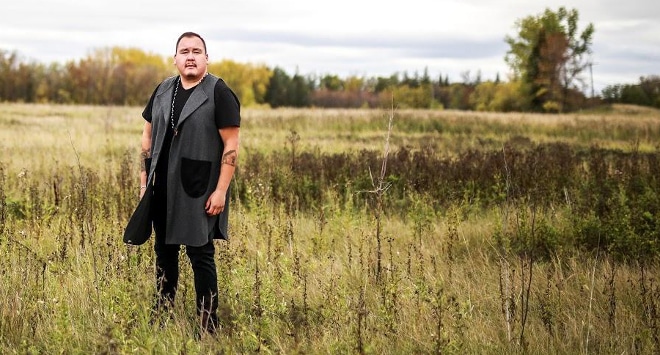 In his last video for “Breathless,” from his 2015 debut Earthly Days, William Prince found himself in a darker, colder place. The elements evoked this feeling of being breathless over falling in love, losing someone, and reflecting on what once was. This time around for “The Spark,” the lead single off the Canadian country singer and songwriter’s follow up album, Prince wanted to heat things up—or find the light amid the darkness, per se.

The track, off his second full-length album, Reliever (Glassnote), out Feb. 7, is a soulful tale of love, faith, and uncertainty. Prince tells American Songwriter that, for “The Spark,” he wanted to show more warmth. “Naturally, the title and lyrics lend themselves to these elements,” he says. “There is a warmth within the chemistry you feel when meeting someone for the first time and having it click.”

Directed by screenwriter and director Christopher Smets (The Strumbellas, Orphan Black), there’s a delicate potency to the video and its connection to the song’s message of losing hope then finding that spark in someone, all wrapped in Prince’s lush vocals. Through the lens, there’s Prince sat in a dimly lit room with a glimpse of two lovers backlit by a roaring bonfire.

Fire conjures the “spark” (or light) of love in some ways. “Fire sheds light and has a very commanding quality,” says Prince. “You can see fire from afar and feel it when you’re near. You have to pay attention and be aware with fire. Otherwise, you can end up burned.”

For Reliever, Prince reconnected, and recorded with, Scott Nolan in Winnipeg, and producer Dave Cobb (Sturgill Simpson, Zac Brown, Miranda Lambert) in Nashville. Both worked with Prince on his debut. The album explores human emotion—everything from healing, connection, and a promise for something better.

As he sets upon releasing Reliever, it’s clear there’s more ahead for Prince. In nearly five years, the former medical student and Hip-Hop DJ’s track record has remained solid. Prince already picked up a Juno Award for Best Contemporary Roots album for Earthly Days. Earlier this year, another big moment for the singer hit close to home when he opened up for Neil Young at the Centennial Concert Hall in Ottawa and was then asked to join the singer on a handful of solo dates in the U.S. Yes, there’s definitely more spark for Prince.

0
Considered by many to be the world’s greatest guitarist, with good reason, Tommy Emmanuel is a true song...
Read more
Features

0
SEVEN STORIES ABOVE THE SUNSET STRIP in Hollywood is the Chateau Marmont, an old hotel...
Read more
Articles