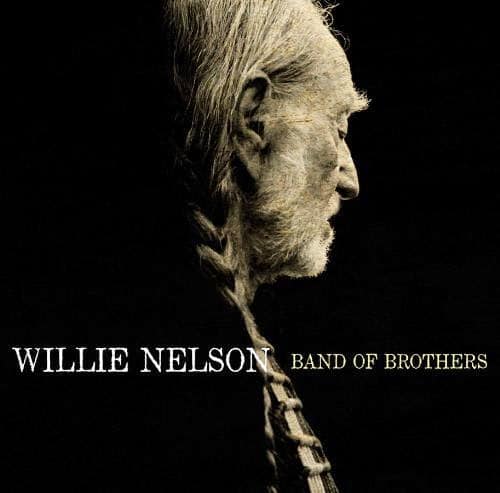 Willie Nelson
Band Of Brothers
Legacy
3.5 out of 5 Stars

“There is no gain without pain, well I must be gaining a lot” are the first words of Willie Nelson’s latest (and surely not his last) record, Band of Brothers. The album, an ambitious fourteen song affair that features Jamey Johnson on the Billie Joe Shaver tune “The Git Go,” is largely comprised of the type of the laid back country waltzes one might expect from Nelson. But there’s also mid-tempo rhythm and blues (“Used to Her”), playful rockabilly (“Crazy Like Me”), and heartbreaking balllads (“Whenever You Come Around”).

Band of Brothers is Willie Nelson’s first album of largely self-penned tunes in almost two decades, but on his latest, Nelson mostly proves he’s still as sharp a vocalist as ever, delivering lines like “I’m standing here holding the biggest heartache in town/whenever you come around” with all the trembling pain and fluttering beauty in his eighty-one-year-old voice.

Brothers is a retrospective record, but it rarely falls prey to cheap nostalgia. Nelson looks back on past hardships on “The Wall,” he recounts a laundry list of old flames on “Wives and Girlfriends,” and looks ahead to a long life of future rambling on the closing track “I’ve Got a Lot of Traveling To Do.”

Nelson restates his commitment to his road warrior independence once again on the title track, but on the very next track, “Hard to Be An Outlaw” Nelson gets cranky (and a bit self-righteous) looking down upon the younger generation of country singers who sing songs “they call country, but that’s not how it sounds.” It’s not a great look, but if anyone’s earned it, it’s Willie.