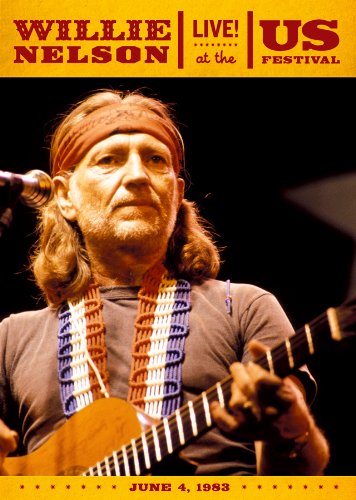 Willie Nelson: Live! At the US Festival 1983 By the time Willie Nelson was asked to headline Country Day at Steve Wozniak’s US Festival on June 4, 1983, he’d been a major instigator of the outlaw country movement, racked up 30 Top 40 country hits (eight of which were chart-toppers) and had four motion-picture appearances under his belt. Suffice it to say, the Red Headed Stranger was hitting on all pistons when he strapped on his trusty battered guitar Trigger to lead his crack band on this particular Saturday night.

With nary an introduction, Nelson launches into jaunty opener “Whiskey River” and from there it’s a trip through a canon dotted by self-penned classics and uniquely interpreted covers. Sporting a white bandana and rocking a red, white and blue guitar strap, the Texas native performed with a preternatural ease, seamlessly segueing from songs like “Funny How Time Slips Away” into “Crazy” and then “Night Life.” While his entire coterie of sidemen compliment each other like musical puzzle pieces, special nods go to sister Bobbie on piano and harmonica player Mickey Raphael who comes off looking like a Magic Dick doppelganger with a smaller Afro. Bobbie Nelson’s matter-of-fact runs give the Bob Wills gem “Stay All Night (Stay a Little Longer)” a juke joint swagger. And while Raphael’s harp may not be a traditional country music instrument along the lines of pedal steel or a fiddle, his contributions are crucial whether it’s how he punctuates the double-time cadence of “Bloody Mary Morning” or provides subtle accompaniment on the Irving Berlin ballad “Blue Skies.”

A special treat is the appearance of fellow outlaw Waylon Jennings, who’d appeared earlier on the bill (and has his own Live At the US Festival 1983 DVD). Looking hale with his trademark black hat and vest, he’s greeted with a hug by Nelson before the duo launch into “Mamas Don’t Let Your Babies Grow Up to Be Cowboys.” The two then perform “Good Hearted Woman,” a song so good that you don’t mind hearing it a second time after Jennings’ host sang it earlier in the set. While the editing looks dated right up to and including a cheesy Willie Nelson insignia better suited for a public access show that periodically flashes on the screen in-between songs, the stellar quality of the performance holds up almost three decades after the fact.