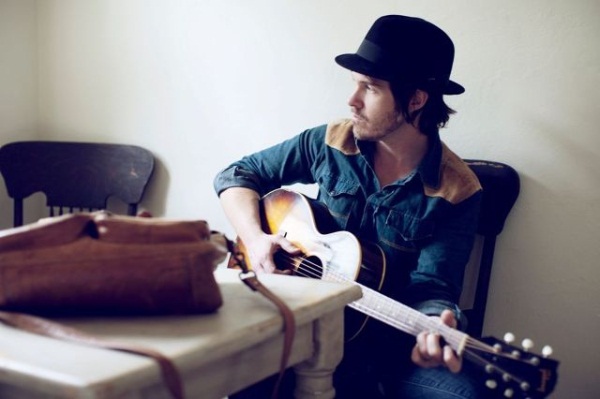 Writing What He Knows: A Q&A with Trent Dabbs Trent Dabbs, the Mississippi-born founder of Ten Out Of Tennessee, has spent much of 2012 touring with his new project Sugar and the Hi-Lows. But during that time he found time to write and record his seventh solo album Future Like Snow, which was released earlier this month. We recently spoke with Dabbs about his creative process, writing for TV, and collaborating with artists such as Mary Steenburgen.

Given that you put out albums fairly frequently, I was wondering how long you’ve been working on songs for this album.

Well, over the last year and a half I’ve written and recorded these songs. But they weren’t in the same place or in the same “head space” or anything like that. This is a different approach for me to release a record like that.

How was it different from things you’ve done in the past?

Well, I think it was different just because there wasn’t a concept to it. It was more about the songs that I was really pleased with over the last year and a half. I wrote with a lot of different people. I would say there are definitely more collaborations on this record than on any other one as far as writing is concerned. There was a wide range of artists and songwriters that I wrote with, from Katie Costello who is an artist in New York to Mary Steenburgen, who I used to watch as a kid in movies.

Do you take a different approach whenever you’re co-writing with someone, versus when you’re writing by yourself?

Yes. Solely because I feel like I’ve collaborated and I love songwriting so much with other writers and artists that at times it’s been a little debilitating because I can’t be my own editor. I love asking people that I have mutual admiration for to be a part of the process and not worry so much whether it’s going to be their song or my song. So, it’s definitely a different approach because it’s not sitting down going, “Okay, we’re writing for our next record.” I guess it’s more about the song and the sound when I’m writing with other people. I mean, I was in different places writing this record. It wasn’t just sitting at home by myself and writing and then going into a studio. It was going into a studio and working with a producer and writing with a producer. Or it was going to California and experiencing something and then trying to write with three people.

You’ve mentioned in interviews that the Sugar And The Hi-Lows project  was kind of out of nowhere and writing the songs for that album just felt easy and felt right. Did you have that same experience working with this album or were there challenges with putting yourself in an appropriate place to be inspired and to write?

It was similar, as far as letting the songs come instead of trying to force it. That’s how it was with Sugar and the Hi-Lows. That just evolved into a sound and we were excited about recording it. This was over such a long time-span. This was kind of like me gathering some of my favorite songs and sort of making my own soundtrack of the last year and a half.

Is there any particular song where the process was extremely interesting and fun to create?

Yeah. I feel like I always want to learn.  I just want to surround myself with people that I feel like I can learn from. A lot of times the people are artists or writers that I really respect and want to learn from. In some cases its art inspiring other artists. Like I was saying with Mary Steenburgen, she’s an amazing actress and a really great songwriter. It’s pretty bizarre that I could end up in California writing with someone like her who has inspired me through what she’s done. And then we write a song about hoping for home and just love and loss, you know?

Did you go to California just to write with her?

Well, a couple of people went out and stayed at her place and Ted Danson’s place in Ojai. A good friend of mine, Barry Dean, who also wrote on that song and is in our office here in Nashville, introduced me to her, and he trusted me. There was a lot of trust going on to introduce me to someone like her. He’d been writing with her, and it was all just mutual friends.

Do you find that networking and music communities are what helps you meet artists that you can connect with as far as writing goes?

Yeah, I think so. I’m not new to songwriting. So, since I’ve been in Nashville for eight years, I’ve gained so much trust with certain writers that I’m still learning from. I think it’s so much more comfortable to sit in front of someone and create something when you know that they’re not going to use you in any way, but it’s more about the art that you’re creating.

Yeah. I feel like a lot of co-writers are paired together because people think it might help someone financially. It’s great that you get to co-write in order to create the art that you really want to make.

Yeah. I remember asking this counselor friend of mine when I moved to Nashville if it really just takes one song, because that’s what I believed. And he was like, “I hope not, because I have friends that have written thousands of songs and still haven’t cut through.” And that was so hard for me to hear, because I love to keep this childlike delusion of where music can go with me all of the time. That was a little deflating, but at the same time I saw him recently and thanked him for it. It always taught me to keep going. I must have had two hundred blind musical dates already, and after enough of those you can kind of understand where you connect and where you don’t.

Have you ever had that co-writing session that you just both knew wasn’t going to work out?

Yes, that’s happened a couple of times. It’s just the same thing as a date. You want to thank them for showing up and wish them the best.

Like it’s not anybody’s fault but it was just never going to work out?

Yeah. I think that’s true. You can’t always be on no matter who you are. It could be bad timing, anything.

You have elements of so many genres in your music. From a writing standpoint, how do you track your development in order to have gotten where you are?

I try not to think about putting up fences creatively. I’d rather think more freely and know that it’s okay if I have a song that ends up sounding like an ‘80s John Hughes movie soundtrack. Or it’s okay if I have a song that sounds like I just wrote it after a funeral. I pretty much know that no matter how far I think I can go outside of the box it will still sound like how I am as a writer – whether that’s good or bad, that’s for everyone else to decide. I think so many artists have this perception of what they are and, even sonically or artistically, what their music sounds like. But it sounds like that to them and it doesn’t to everyone else. So I feel like the older that I get the more I just need to let go of any fears of how something will be perceived and more just do what I want to do and trust that it will sound like me and it’s coming from a genuine place.

It’s interesting that you make those references. It doesn’t sound like a lot different artists, but it sounded like one artist coming from totally different places.

Well, that’s good to know, because I really don’t want to stand musically bipolar at all. These days it’s still about a song. So if someone likes one song but they don’t like another then they don’t have to by the other one.

Especially in the days of iTunes and Spotify.

You’ve had dozens of TV spots with One Tree Hill, Grey’s Anatomy, The Hills, Vampire Diaries, Pretty Little Liars, and a bunch more. Is sync licensing something that you actively pursue? Or is it something that has surprised you?

Believe it or not, it continually surprises me. I feel like you’re so lucky if someone can hear your music, and you’re even more lucky if they can put it to a picture. As far having that exposure, for me, anything that’s ever had longevity song-wise or success-wise in this medium is because it came from a genuine place and just happened to connect. Because I know a lot of folks are kind of just chasing down that avenue now, because it really is one of the only sources to create some revenue. But I feel like a lot of the music that I hear is overthinking and trying to fit something, and it rarely makes the goal that they’re trying to achieve.

In the same line, I’m surrounded by these amazing country artists. And if I sat down with them and said, “I got a great idea for a country song, it’s called ‘Truck Whiskey.’” You know? Or something like that? It just wouldn’t fly, because it’s not coming from a genuine place. So I’ve definitely been around people that have thought more about the end of the race rather than the beginning. It just seems to be a losing game.

So as far as getting your music involved in TV, would that be your advice for songwriters, to stick with the music you want to create and when it’s genuine people will recognize it?

Yeah, I do. I’m not saying that I’m not aware of the likeliness that something might fit a picture. I’m a fan of that music. I grew up watching films and thinking that I would love to have music on the other end of that screen instead of just watching it. It always spoke to me in a way that most other mediums don’t. So being such a fan of that I’m always aware of it. But I definitely suggest writers should stick to what they know and just refine it.

I’ve had requests before when people would say, “How about you write a bittersweet symphony meets ‘60s song?” And I’m like, “If I could write that we wouldn’t be having this conversation.”

Would you say that’s pretty much your advice for any young songwriters and artists?

Yeah. Learn from people that are ahead of you while you stick to what you know and keep refining your craft.