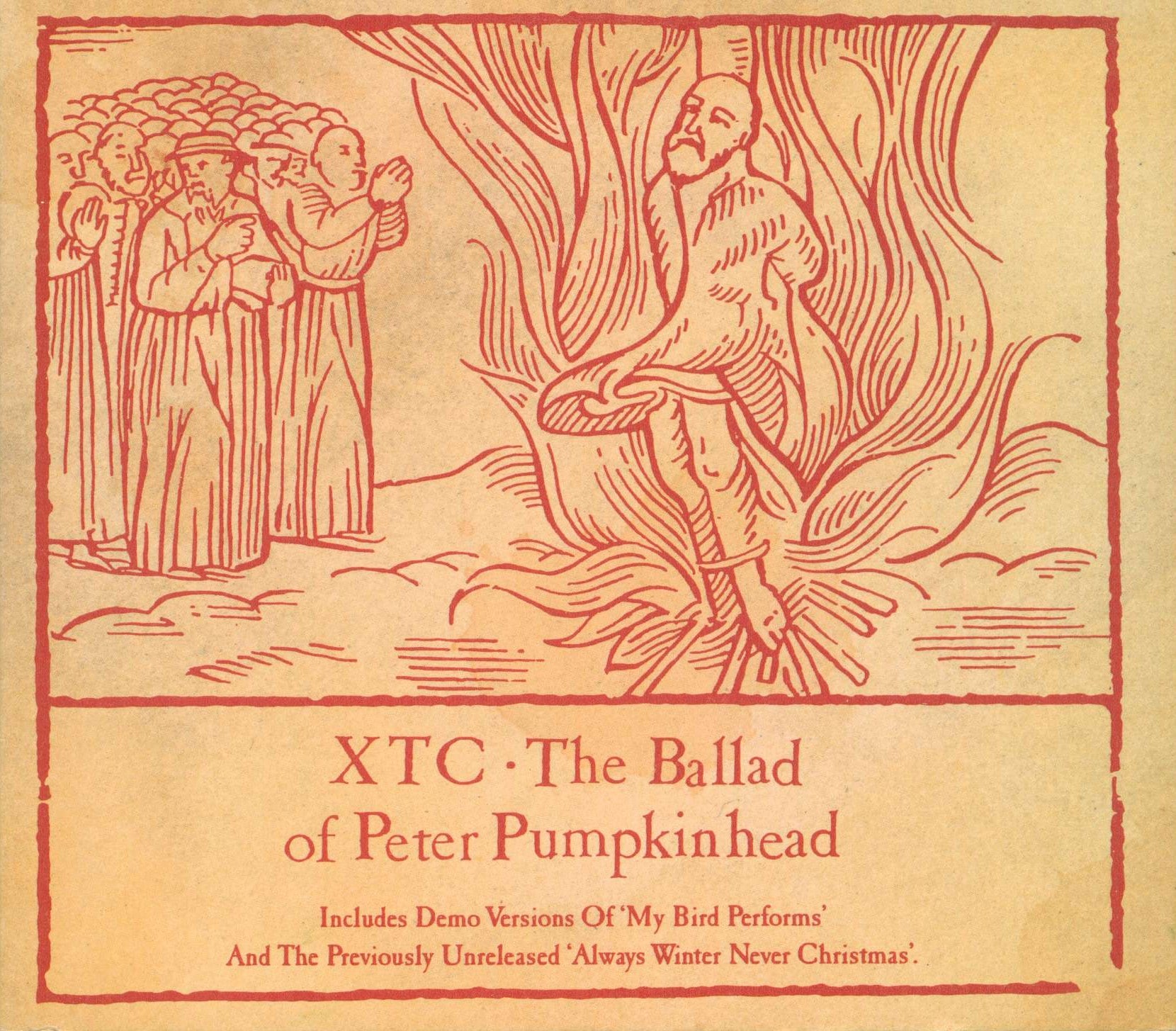 XTC, “The Ballad of Peter Pumpkinhead” Americans have just witnessed, or perhaps endured might be the better word, a pair of political conventions full of impassioned rhetoric and big promises. Regardless of political affiliation, we can probably all agree that such promises often tend to fall by the wayside. But what if there were a politician or any kind of public figure who stepped into the fray and could deliver on every promise he or she made? How would we react? What would become of this person?

That’s the premise behind XTC’s “The Ballad Of Peter Pumpkinhean,” a stinging bit of cultural commentary embedded in a cautionary tall tale. Written by the group’s singer Andy Partridge, the song graced the British band’s 1992 album Nonsuch and exemplified the melodic, literate alternative rock they had delivered since their late 70’s debut.

In an interview with Todd Bernhardt in 2006, Partridge explained how a Halloween jack-o-lantern that he decided to keep around after the holiday by impaling it on a fencepost near his recording studio fired up his creative juices. “Yeah, so I’d see the rotting head, and I started to think, ‘What did he do to deserve to be executed — to be put on a spike on Traitor’s Gate here? He did nothing wrong. He was kind of perfect.’” Partridge remembered.

“And then I thought, ‘Hmmm, what would happen if there was somebody on Earth who was kind of perfect?’ I just started to extrapolate on that idea, and really mess around with it in a kind of Dylanesque way. I thought, ‘Why don’t I come up with ‘The Ballad of’ — the ballad of somebody who’s pretty much perfect?’ And the more I thought about it, the more I thought, ‘God, they’d make so many enemies!’ You know, if they really encouraged humanity and humaneness and love and sharing and giving, they would really piss off so many people in power, that those people in power would do everything they could to stop them, including killing them!”

While Bob Dylan may have been an inspiration to Partridge when writing, he and his band played the song more as an energetic romp than a balladic dirge, with a recording featuring booming drums, jangly guitar, and frisky harmonica. The tale begins with Peter coming to town and immediately making a difference by “spreading wisdom and cash around.” He also makes sure that his largesse goes to the right place, unlike, Partridge implies, certain religious institutions: “Fed the starving and housed the poor/Showed the Vatican what gold’s for.”

Peter’s speeches lure the masses from their places of worship (“Emptied churches and shopping malls”) for a simple reason that’s almost counterintuitive in today’s cynical society: “Peter Pumpkinhead told the truth.” Naturally this brings discomfort to those who have already achieved power, but their efforts to damage his reputation fail miserably: “Plots and sex scandals failed outright/Peter merely said, ‘Any kind of love is all all right.”

But these “enemies” “who would keep us on our knees” are not to be denied, as the final verse sadly makes clear. Peter ends up crucified, but, as Partridge’s final lines suggest, his impact reverberates throughout the populace: “He died grinning on live TV/Hanging there he looked a lot like you and an awful lot like me.”

Although the song’s video makes explicit visual references to the assassination of President John F. Kennedy, Partridge has insisted in various interviews that the lyrics are more fable than fact. What’s certain is that XTC’s “The Ballad Of Peter Pumpkinhead” implies that unbridled honesty in front of the masses is a one-way ticket to martyrdom.