And the latest collection from the group is Lullaby Versions of J Balvin, which is set to drop on May 6.

But ahead of that release, American Songwriter is excited to share the debut single and music video from the collection, a cover rendition of J Balvin’s song “Mi Gente,” and an accompanying claymation music video, which you can check out below.

“J Balvin’s unique, colorful world deserved an equally interesting, fun treatment, and we felt a stop motion animation full of clay and cut paper would help pay tribute to that,” said senior illustrator and graphic designer Jennifer Cuellar. “After 30 plus hours of creating, assembling, and completing this exciting project, one of the largest goals was to ensure that the spirit of the track was captured throughout.

“Our stop motion animation for ‘Mi Gente’ incorporates colorful clay and cut paper, a tribute to the fantastic visuals found in J Balvin’s uniquely colorful world. To work in this format was an exciting and special opportunity to hop outside of the usual 2-D world I work in and create a 3-D work that embodies the spirit of this track.”

“We’re excited to be lullabying someone as inspiring as J Balvin for too many reasons to list,” added Lisa Roth, creator of Rockabye Baby and VP and creative director of CMH Label Group. “He’s an award-winning, record breaking superstar. A prolific singer, songwriter, rapper, and producer. A proud Colombian who became known as the Prince of Reggaeton, he beautifully represents today’s more global, multilingual generation of listeners.

“But what I personally love the most is he’s an authentically positive and inclusive voice at a time when it feels like the opposite is prevailing. The guy touches me.”

Rockabye Baby has amassed more than 2-billion song streams and has received attention from every music outlet worth their salt, from NPR to The New York Times. In its history, the series has covered songs from artists like Dolly Parton, Ed Sheeran, and Snoop Dogg.

Not to be outdone, the 36-year-old Colombia-born J Balvin has sold over 35 million albums and amassed some 25-billion streams. His latest LP, Jose, came out in 2021. It reached No. 12 on the U.S. Billboard Hot 100 chart.

But perhaps the best of the two is here in this cute claymation video, which you can check out now: 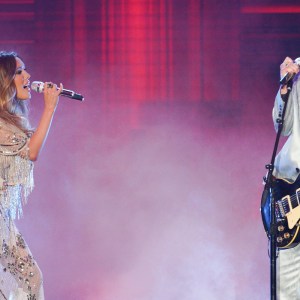