Attendance was steady on Friday, the opening day of the 2010 Summer NAMM show. While the 2009 show, coming on the heels of an economic downtown, saw fewer exhibitors, the 2010 show has shown a steady buzz of foot traffic. With fewer companies exhibiting, some vendors opted for larger display areas, such as Orange Amps and Paige Capo.

Taylor announced a small-bodied guitar called the GS Mini(TM), which continues in the tradition of the Baby Taylor, but adds a solid Sitka top, a back and sides of sapele laminate, an ebony fretboard and bridge, and a tortoise shell pickguard.

Across the hall, the Martin team unveiled a NAMM show special, the D-42 Blackwood, of which only ten models have been produced. In a clever marketing strategy, Martin will only take orders for the D-42s at the Summer NAMM show. Martin also announced the 00-15M, an all-mahogany guitar. Reminiscent of blues guitar from the 1930s, the 00-15 was the first Martin guitar model played by Bob Dylan.

On Sunday, NAMM will host the general public at the first Wanna Play Music Sunday. For more info, visit www.namm.org/wannaplaysunday. 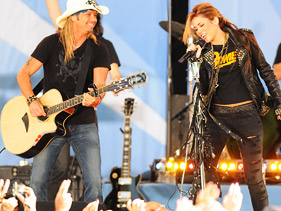