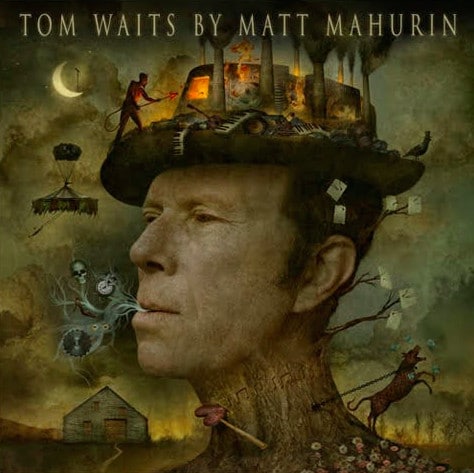 A musician is inspired by a muse, but a visual artist can sometimes be inspired by the work of a musician. Such was the case that led to the 35 year collaboration between beatnik poet/avant garde eccentric Tom Waits and freelance photographer Matt Mahurin. Originally hired to do the photos that would grace some of Waits’ early album covers, Mahurin continued to share his artistic ideas throughout to Waits throughout the latter’s ever-shifting career, resulting in images that were as eclectic as the music itself.

Consequently, Mahurin eventually realized that the unused negatives he had shot over the years would make a fascinating visual presentation all its own. True to form, it’s a varied collection, one that includes some straight-on portraits of Waits onstage and off, as well as more suggestive settings like those that have graced the covers of Waits’ especially adventurous efforts.  Mahurin’s ability to combine the sinister with the surreal has become a hallmark of that intriguing imagery — musical and otherwise — and it’s clear from this book that Mahurin played a major role in its creation and conception.

That said, Mahurin boasts ample credits of his own. As an illustrator, photographer and film director, his work has appeared in any number of esteemed publications and shown at such prestigious venues as the Museum of Modern Art, the Metropolitan Museum of Art and the Sundance Film Festival. His work within musical realms is equally impressive, having overseen videos for Waits, U2, Metallica, David Byrne, Lou Reed and Joni Mitchell.

The fact that Waits trusts him so explicitly with his image is, of course, an accreditation all its own.

“This book is one more chapter in our artistic history—told from three thousand miles apart and without a word between us,” Mahurin says in the foreword. “Tom’s body language part-ape, part-ballerina. His facial expressions part-prankster, part-monster— all whispering or wailing to me what they wanted to be. A huffing bull, a puffing tractor, a suffering clown.”

Waits offers his own reflections by way of some poetic verse, obtuse as always but well in keeping with the abstract tone of the work overall. Indeed, the images capture the musician in a variety of dream-like settings — both real and imagined — often in combination with various artistic elements that find a bond between the mundane and the macabre. In addition to the unused negatives, Mahurin includes a number of original paintings, drawings, digital illustrations and photographs heretofore unseen and inspired by several of Waits’ song titles.

Given this array of images, the reader is compelled to simply thumb through its 240 pages — some 175 photos in all — and absorb the imagery in all its visual glory. There’s no table of contents and the only editorial copy that follows the initial introductions is simply the inclusion of select song titles. Likewise, the dark tones add a sense of mystery and allure, an element that enhances the nocturnal ambiance overall. Given the thick stock and the 12 X 12 sizing, it’s an ideal coffee table fixture, one that will induce an individual to give more than a cursory glance at their leisure.

While a traditional bio might be appropriate for learning the more intimate details of Wait’s music and musings, this particular compendium expresses those concepts in a decidedly more dramatic way.