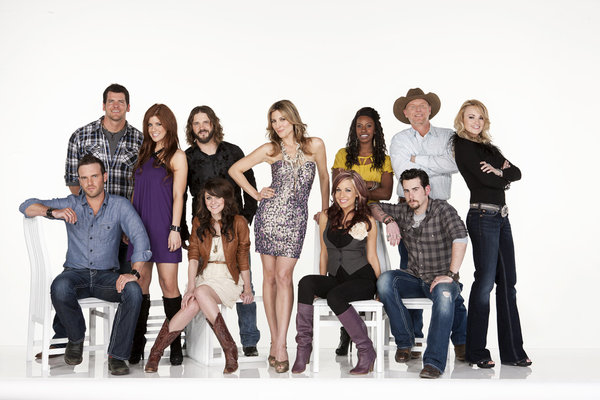 CMT’S Next Superstar is a new show that pits ten contestants against each other in an effort to find the next Brad Paisley or Carrie Underwood. Appearing on the debut season are Adrienne Beasley, the Kentucky farm girl with the unforgettable voice who viewers may recognize from her recent American Idol audition, and Wynn Varble, a 50-year-old Nashville vet with a few albums and songwriting credits under his belt.

Tell us a little bit about the special challenge in the first episode.

The first challenge was taking a pop song and turning it into a country song, which sounded easy at first. You know, just add strings, steel guitar, and banjo, and it’s a country song. But they were wanting a little bit more than that. I ended up doing “California Dreamin’” by The Mamas and The Papas.

Did you know the song before the show?

I did. Growing up, my older brothers and sisters had a bunch of records, and when I was younger I went through their stuff and found this record of The Mamas and The Papas. I remember thinking, “That’s an odd name for a band.” So, I listened to it and listened to “California Dreamin” and thought it was a pretty cool song. So when I saw that it was one of our choices for the challenge I just decided to go for it.

How did you feel it came out?

I think it went good. I really do. I was really comfortable singing it, and the audience responded well.

What was the experience of sharing a house with your fellow contestants like for you?

Oh my goodness. At first I was so nervous. I remember pulling up to the house, and I was like, “Oh my gosh! Is this gonna be like all those reality TV shows with drama queens and fighting and all that stuff?” But I got in there, and all the other nine people were like family. It was amazing, and I enjoyed every minute of it. It was cool being under the same roof with other people who had such a passion for music like I do. That’s one of the rewarding things of the show.

The wildcard contestant is Wynn Varble. What’s he like?

I love Wynn! I miss Wynn! Wynn kinda brought us all together. We would just all gather around him and listen to his stories for hours! He’s so funny! And I loved the fact that he didn’t care who you were. He was gonna act the same way around you as he would anyone else. So funny, but so wise. He really had great advice. He’s written good songs for Brad Paisley and Kelly Pickler and Easton Corbin. Yeah. Wynn’s top notch.

Tell us a bit about your musical background.

I started singing when I was two or three years old. The first song I ever sang, I stood up in church on the church pew and sang “Jesus Loves Me”. From that point on I would always sing in church. Then when I was about fifteen years old I got introduced to country music. My older sisters loved country music. They loved Reba and Shania and all these other epic female country artists. I kinda took hold of that. I started singing at the Kentucky Opry and getting involved in country music. But the biggest thing I’ve done before American Idol: I went on tour with a lady by the name of Lynda Randle. She sings Southern Gospel music. We went to Norway and sang for all these people, and they were so receptive of my voice. I’ve seen people from around here who enjoy listening to me, but when you go to a different country and people are so into your voice, it’s amazing seeing that. That was probably the highlight of my career.

And then you got this massive exposure from American Idol. Did you got a lot of people coming up to you after that aired?

Before the audition in Nashville aired I was basically nobody, and then you wake up the next morning you go from having 134 friends on Facebook to having 600 friend requests in one night! It was like wildfire. People started calling and contacting me, magazines and stuff. People from Ireland e-mailing me and telling me that they watched my audition…It blew my mind! Everyone who sings thinks they’re good, and of course your family thinks you’re good. But when people from different countries are contacting you just to say “You’re awesome,” it just tickles me to death!

So, it kinda snowballed, and I ended up on this show for CMT. It’s amazing. It’s been an awesome experience. These past few months have really stretched me as an artist and also as a person. I love it.

Why do you think you didn’t make it further on Idol?

Well, number one, on American Idol a lot of the songs we had to do were totally out of my comfort zone, you know? I wasn’t used to singing R&B and all that other stuff. I don’t know. I think there was a good reason why I didn’t make it. I mean, maybe because I was meant to be on this show. I’m a country singer. So, I’m where I need to be on CMT.

Of the current Idol contestants, is there anyone you’d like to see win?

Man, that’s tough. Everybody laughs at me when I say this, but I love Paul McDonald. I think he’s got this whole Rod Stewart presence whenever he’s up on stage, and he’s just really different… his persona, his voice, his style. And we haven’t had an American Idol that’s been different like him, and think it would be cool for him to win it. It would be awesome.

One of the skills you have is yodeling. How did you pick that up?

It was from watching Kentucky Hee Haw and going to The Kentucky Opry with my Dad and seeing these kids and people yodeling and stuff. I kinda picked it up that way.

Is yodeling fairly hard to do?

Well, I think that if you sat down and really tried, you could teach yourself to yodel after a while. I don’t think it’s that hard. I was yodeling a couple days ago for my friends because they were looking up all this information on CMT about me being able to yodel. They were really surprised because no one knew that I could yodel until know. I don’t just walk around yodeling. People would think I was crazy! So, I yodeled for them, and they were all trying. It was just a FAIL, but if you sat down and tried for a while you would probably be able to do it.

In a way I was nervous, but in a way I wasn’t because I was on such an emotional roller coaster just coming off the whole American Idol path and everything. I’d just gotten finished with that, and my Nashville audition had just aired. So, I was going in there with the attitude of, “If I don’t make it on this show, it was a nice try. But if I do, here comes the start of another journey.” I got in there and sang my heart out and showed them my personality and I made it on the show! I was super pumped, but it happened so fast! It all happened within a week, which blew my mind.

Which song did you sing for your audition?

You must have wanted to be a musician for a long time, right?

Oh yes. Ever since like elementary school. I remember talking to my elementary school teachers about what I wanted to be. Everyone else wanted to be this or that, and they would change their minds, but all I ever wanted to do was sing. And, before I left American Idol Ryan Seacrest was like, “Hey, if you get cut are you still gonna continue to sing?” I said, “Of course!” This is my thing: Regardless of what happens — American Idol, CMT, or whatever I’m involved in — I’m always going to continue to sing because God gave me this gift and I think I should use it.

Honestly, it feels like my career is taking off. My definition of a crazy TV show would be something like Jersey Shore or something. That’s why I’m so excited for this to air. It’s not just like a reality show. It’s not just us standing on stage and singing. There’s more to it, and I can’t wait for people to see that. I thing America is gonna be hooked in because it’s different. A lot different.

Why should you win the whole thing?

That’s a good question. A lot of people have asked me why I deserve to win more than anyone else, and honestly, everyone in that house has so much potential and so much talent that I’m surprised all of them aren’t famous already! I just want to prove to the world and to myself that I can accomplish this. It’s more to me that just getting up there and singing country music. I want to be a trailblazer. There aren’t a lot of different ethnicities in country music at all. Darius Rucker is basically the only African American singer in the country industry right now. I just want to set a goal for myself to hopefully build a bridge for other people to let them know, “Hey, it’s okay that you’re ‘chocolate’ and listening to country music. It’s cool!” I know I’m not the only person out there. That’s my goal: To start something. Something awesome actually. Not just for myself but for everyone else.