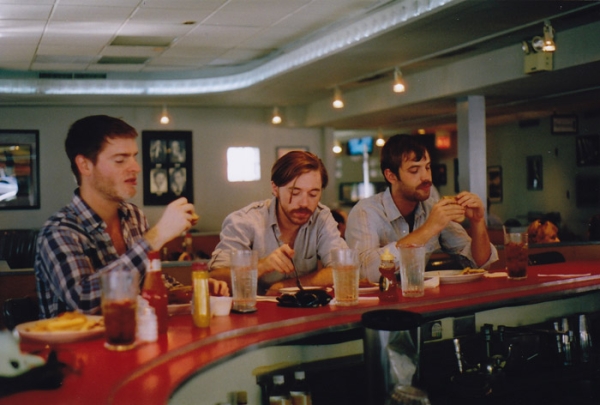 On And The Relatives new album, Green Machinery (Theory 8/YK), fellow Nashvillian Caitlin Rose joins singer Andrew Brassell for a stray chorus line here and there, adding a little touch of Nashville high harmony to the band’s snappy garage-rock. Not unlike The Walkmen’s pop concoctions, And The Relatives mix sweet, smoky vocals, punky on-top-of-the-beat drumming, and slinky basslines. After two previous EPs, Green Machinery is by far the band’s most sophisticated stuff. Brassell’s lyrics are wordy and playful in a bratty Ezra Koenig way. On the ’50s bouncer “Not The Passion,” he wonders, “Can a pacifist make love/ To a fisticuffs struck dumb/ And still remain with his cause?” On the song’s chorus, the band unexpectedly employs the talents of a soulful horn section. By the next track, “Regal Son,” the ‘Rels are channeling San Fran or Austin pysch rock. “I’m so fake noir,” Brassell laments amid the Black Angels-esque paranoia. Green Machinery sits comfortably between a lo-fi aesthetic and crisp and eloquent production. To borrow a line from Nashville blogger and radio DJ, Out The Other, it’s a new sound for Nashville. It’s garage rock that’s been moved to the living room, where the band is putting back gimlets rather than PBR. On “Fourth Rate,” the band teases a wobbly-key piano intro before launching into the grade school kiss-off. “You were never my baby, just a fourth grade love affair.” The song cuts out after just two minutes, leaving you wanting way more.