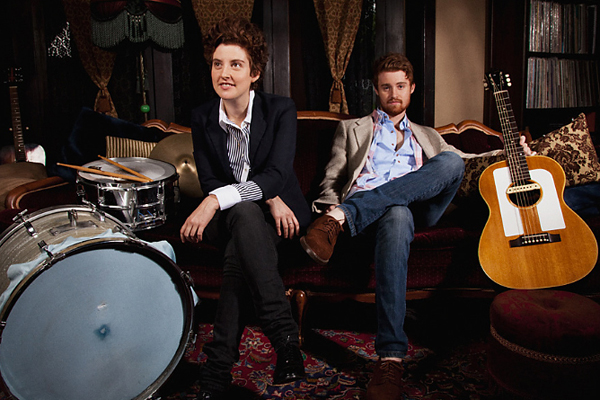 The Belle Brigade are a brother-sister pop rock duo from Los Angeles, whose self-titled Reprise Records debut is destined to end up on many Best Of The Year lists. Barbara and Ethan Gruska grew up with music in their blood; their father is songwriter/composer Jay Gruska, and their grandfather is Star Wars composer John Williams. We quizzed the band about their love of Paul Simon, sharing a band, and the words they love and hate.

What is it like being in a band with your sibling? What are the best and worst parts?

There is nothing else like it. We are very close and very similar so it makes for a good creative team. We sometimes disagree and sometimes it’s hard but we both respect each other as people and songwriters so we don’t let it get to the boiling point. But overall we love working together and it feels really natural.

Did you have inkling when you were kids that you would work together musically?

No. We worked on our own for most of our lives and then about two and a half years ago we started working together.

Your father is songwriter Jay Gruska. What’s it like having a musical dad?

Our dad is our biggest musical influence. He’s always been kind of a songwriting coach for both of us without being a stage dad. He is always really helpful and insightful about our songs and his music has always been an inspiration for us. He’s a good dude!

Has he given you any advice on songwriting or your music career?

Our dad has always been like a quiet humble adviser for us. He always has helpful things to say and musically he’s very clever. He’s got a really great ear for song form…

Tells us about how your album was inspired by Simon and Garfunkel and Fleetwood Mac.

Well, we are more fans of Simon’s solo music than his earlier work but we do love it all. We were listening to a lot of these guys before and during the recording process, and somehow the sounds and ideas just work their way into your brain… I think our inspiration from them really just comes from a love for their music and their lyrics. We also like to geek out on the drum sounds and stuff too!

Tell us the story behind “Losers.”

Hopefully “Losers” explains itself through the lyrics, but it all just kind of started with the thought/lyric “there will always be someone better than you, even if you’re the best…” Once we got working on it together the process went by really fast and smoothly. It was a really exciting moment for us to finish it. The song is just about competition, ego, envy, and insecurity and it’s supposed to be a pep talk to ourselves.

We love “love” and hate “Airport.”

Well, when it comes quickly it is really exciting and fun, but that’s more unusual for us. We definitely do a lot of revising and a lot of recycling. We spend a lot of time on one song normally.

Who is an underrated songwriter, in your opinion?

In our minds he is not underrated but maybe lesser known by the public… Blake Mills — one of our dear friends and favorite songwriters.