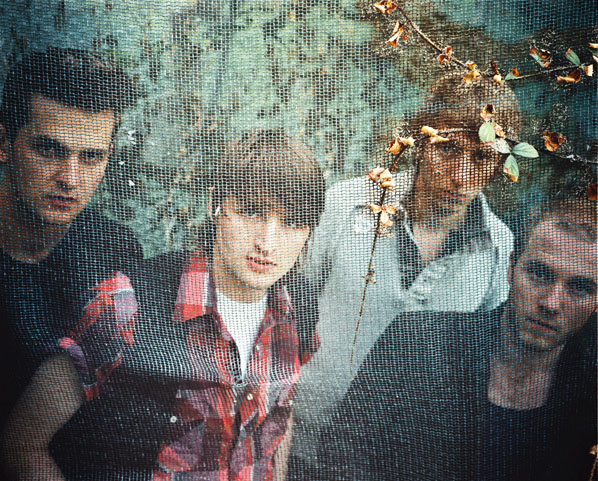 “Drinks With” is a new feature at AmericanSongwriter.com in which two or more songwriters have a drink and a talk with each other (almost exclusively) about writing.

For our first in this series, Skip Matheny — former bartender in a retirement community and currently a songwriter in the band Roman Candle — caught up with the U.K. band Wild Beasts in the basement of New York’s Mercury Lounge.

Who We’re Drinking With:

What is your favorite drink?

TF: There’s this thing called a Negroni, which is Campari, gin, martini [sweet vermouth], and orange.

TF: They do a thing where we’re from called called a “Turbo wife-beater” which is a shot of vodka in a pint of Stella Artois.

If you wake up and think, “I’ll try and write a song today,” where does that usually happen? At a piano, guitar, full band in rehearsal space?

TF: Well all our songwriting is credited four ways. We usually start with a lyric or a melody, or the bare bones come from Hayden or me. But when it comes to the practice room, it gets pulled in all kinds of different directions, and there’s a sense of “let’s try and press it.” We try and kind of surprise each other and see what we can do with all of the bare basics, and we go through different versions.

HT: I think [the phrase] “bare bones” is brilliant, because it is like a skeleton. Sorry for the analogy [laughs] — but it’s like a skeleton of a cat. If you look at two cats or five cats, they’ve got the same skeleton. But with the flesh and the fur on, it’s a black cat, furry cat, fat cat, you know.

When you are writing, do you all think in terms of pop songs or craft? For example the repeated line from your song “All the King’s Men,” “Let me show my darling what that means” works in a similar way to an old ballad, or to the repeated line in a song like “The Gallery” by Joni Mitchell. By the last time you hear the repeated phrase, it’s incredibly different and twisted from the first time you heard it.

HT: I think the beauty of pop is that it’s forgiving of everything. You can throw anything into it, and it’s still pop. You can throw in some sort of Japanese folk music with ghetto hip-hop, and it is pop. Also, it is a really underestimated skill: taking big ideas and condensing them down into simple lines. Some people have just got it. I think we’ve gotten better at it.

Do you have any favorite authors that you have in mind while you are writing?

Yeah, I believe she was friends with Derrida?

TF: Yes. There’s a line in “Two Dancers (II),” “Do you want my heart between your teeth?” which was taken directly from her. It’s a center point. She’s definitely one of my favorite writers, although I don’t read French and most of her books haven’t been translated.

HT: Rimbaud was a big influence for me. It was a translation from French. I think the French language does have this sort of sensuality to it — anyway — it seems to have.

TF: I think French writing has a “f**k you” arrogance to it as well. It’s like “I’m just going to say this now.” Like Baudelaire, who is very much like “Here it is” — which is great.

If your hand was forced and you had to cover a Phil Spector song tonight, what would it be?

TF: I don’t want to speak for everyone but the Christmas one where he does the voice-over thing, and there’s a picture of him with Father Christmas.

Perfect — I think that was “Silent Night.”

TF: I’ve also got a version of him doing “Spanish Harlem” on his own with a guitar, really badly. For somebody like Phil Spector to sing those lyrics is really disturbing, but I really like it. “Be My Baby” is his high point though, for sure.

Do you have any habits when writing lyrics? For example do you use jumping off points like a poem, scene from a film, or do you lock up your iPod and turn off the TV, and try and make an entirely unique utterance?

TF: I think jumping off points are good. Obviously, we are trying to get out what we’re doing, but… and it might sound odd as a sound byte to say “Yeah yeah, [we’re influenced by] French Post structuralist feminist theory and Bruce Springsteen’s New Jersey.” But it is that kind of juxtaposition I suppose.

HT: I just think you have to have your ear on all the time. It’d be silly to put limits on yourself. You just have to be ready or aware.

You all are from the Lake District and Leeds. Do you work better isolated from great amounts of activity? Or does it matter?

HT: You’ve got to let yourself go mad in a way. You’ve got to get dangerously obsessed to get [an album] out. You have to give yourself the right space and environment to allow that, and not to, sort of, “break the spell.” It doesn’t take a lot to pop the bubble, and then you’ve got to work hard to build it back up again.

Can you tell me a little about how the writing of the Two Dancers took shape?

HT: Rather than having a core starting point, and everything emanating from it, we sort of built towards a center point as if it was a ripple effect but it all sort of came inwards. So it was a ripple — but in reverse. It’s almost like an eye contracting rather than dilating. [Laughs]

TF: It’s supposed to be about a series of scenes — different ways of saying the same thing.

HT: I think in a strange way, a lot of the album discusses the same subject, and we’re just taking pictures of it from different angles. It’s also like taking a picture of someone full-on, in profile, and you get this façade, and you take a photo from behind them, when they don’t know you’re looking and you get this completely different aspect.

Lastly, I’ve got a few pictures of some songwriters, and if you don’t mind just say whatever song or thing pops into your mind when you see these artists — even if the song or thing doesn’t have anything to do with the writer:

[Photo of Bruce Springsteen circa 1995}

They all sing guitar riff from “Born to Run.”

[Photo of Captain Beefheart circa 1975]

Well thanks very much. I guess I better get upstairs.*

TF: It’s a real pleasure. We rarely get the chance to talk about this stuff. 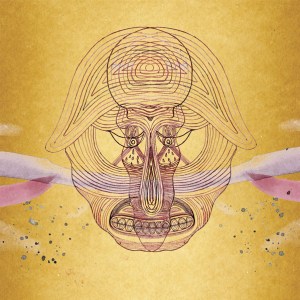 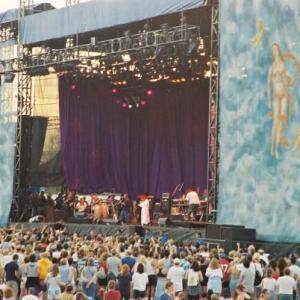