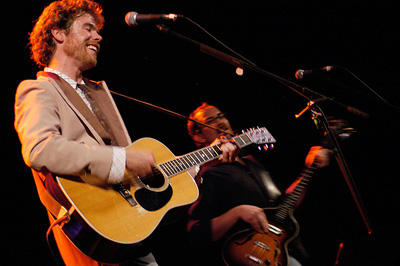 Josh Ritter and his Royal City Band may well be some of the hardest working men in music. A soft-spoken singer-songwriter who released his self-titled debut album over ten years ago, Ritter has written and toured tirelessly since. He’s developed a cult following and critical acclaim as a result—he constantly sells out shows and his most recent album, April’s So Runs the World Away, earned his writing comparisons to that of Bob Dylan’s and Tom Waits’. In his spare time, of which he likely has little, he’s managed to channel that voice, along with a love for literary greats like Flannery O’Connor and Philip Roth, into writing a novel, Bright’s Passage, to be published by Dial Press in 2011.

It should come as no surprise, then, that a man who has devoted his life to his craft would play a two-hour, twenty-five song set to a room of loyal fans without ever losing a bit of energy or the infectious smile that seems permanently ingrained on his otherwise plain face.

Ritter began his set last night at Nashville’s Cannery Ballroom with “Good Man,” off 2006’s The Animal Years, to cheers and a choir of fans joining in for the tune’s subtle but triumphant chorus. Not long into the second song of the night, “Wolves” (off the same album), a trend could already be spotted in the crowd’s singing in unison, a feat rarely seen this early in a set and even more rarely seen from the notoriously tough crowds Nashville often brings.

Ritter’s band was tight, clean and clearly having just as much fun on stage as he was. Almost as impressive as the music itself was bass player Zach Hickman’s mustache, which, despite heat and a lot of jumping around, maintained two perfect curls throughout the band’s two-hour stint.

Many artists are faced with the dilemma of trying to showcase new material during live shows while also keeping the audience appeased by squeezing in as many “crowd-pleasers” as one set will allow. Rather than choose, Ritter took an all-encompassing approach, playing nearly every track from So Runs the World Away while sprinkling audience favorites like “Kathleen,” “Right Moves,” and “Lillian Egypt” in between. He often teased the crowd before jumping into songs like the latter, at one point asking for some “Egyptian-themed lighting” to illuminate the stage behind him.

And in case thoroughly covering his own catalog wasn’t enough, Ritter rounded out the night with a handful of covers, ranging from John Prine’s “Mexican Home” (which he contributed to the recent Prine tribute album Broken Hearts & Dirty Windows), Mississippi John Hurt’s “Folk Bloodbath” (also off So Runs the World Away), and a nod to Talking Heads “Once in a Lifetime” in the middle of his own “Harrisburg.”

“It was hot as hell today,” Ritter declared in between songs, also noting his amazement at the almost “biblical” pop-up monsoon that drenched downtown Nashville for all of fifteen minutes earlier that afternoon. “Somebody upstairs was angry,” he smiled.

Much of his onstage banter was similar, drawing more upon the experiences of his crowd than on those of his own. His conversational, selfless means of interaction only added to the night’s intimacy, reinforcing the unity often felt when listening to Ritter’s recordings, a sense of “we’re all in this together” that brings comfort from even the saddest of songs and situations.

The four-song encore, which featured guest vocals from opener Tift Merritt on Emitt Rhodes’ “Live Till You Die,” ended with 2007’s The Historical Conquests of Josh Ritter standout track “Wait For Love” and one final slow, soft sing-along of the song’s title refrain. In times like these, it seems everyone is waiting for something, and Ritter could not have chosen a more perfect song to end an already damn near perfect set.

In act three, scene two of Hamlet, William Shakespeare’s protagonist fatalistically mused, “Why, let the stricken deer go weep, the heart ungalled play; for some must watch, while some must sleep: so runs the world away.” This scene shows Hamlet at one of his most desperate points, but also shows him to have developed a remarkable control and understanding over his own self. It’s apt, then, that Ritter chose this line for his record’s title. His writing and performance indicate an understanding of human nature unmatched by most, and it’s safe to say everyone left his show feeling a little more themselves than they did going in, and a little more together, having witnessed a man who works so hard to bring his fans to that very place. 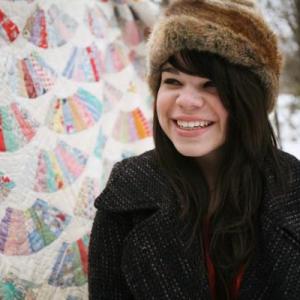