Kim Gordon has never stopped moving in nearly 40 years. Since co-founding Sonic Youth in the early 1980s, she’s appeared on dozens upon dozens of records, whether with that iconic noise rock band, her side project Free Kitten with members of Pavement and The Boredoms, her more recent drone project Body/Head with Bill Nace, or as a collaborator with other artists. Just last year she lent her vocals to the country-tinged “Refute” on Stephen Malkmus’ Sparkle Hard, which was a brief respite from her return to the visual arts career she launched well before becoming a full-time musician.

Gordon has also made a different, more literal move in recent years. After living in western Massachusetts, following decades of being part of New York City’s music community, she returned to the city where she grew up, Los Angeles, went to college, and cultivated her interest in art.It’s not a homecoming, exactly. In fact, the somewhat bewildering experience of returning to California resulted in the creation of a new musical project that largely examines deceptive concepts of home and observations about her once and future city. It’s titled, appropriately, No Home Record.

Images of Los Angeles abound on No Home Record, from tent cities in “Sketch Artist,” to blacked-out cars in “Murdered Out,” which was originally released in 2016. It’s an album largely about a city with a population of millions, but for many doesn’t actually feel like home.

“L.A.’s very much a voyeuristic, look-from-your-car kind of city,” Gordon says, expanding on some of her lyrical observations. “‘Sketch Artist’ is influenced by seeing all the homeless people living in tents. ‘Murdered Out’ comes from that idea of spray-painting your whole car in matte black, so it’s like blacking yourself out of culture, kind of. And then with ‘Airbnb,’ [it’s about how] L.A. is a very transient city. It always has been, whether it’s the bungalows in Hollywood or Santa Monica, where people come seeking fame and fortune in Hollywood. There’s that sense of transition.”

No Home Record is, much like Gordon’s relocation, the beginning of something new. In addition to being her first solo LP, it brought about an entirely new way of working on music for Gordon. Produced almost entirely by Justin Raisen, who’s also worked on records by Charli XCX and Sky Ferreira, the album is a collection of haunting, strange electronic pop songs featuring Gordon delivering mostly spoken-word verses on top. It’s something like beat poetry gone industrial, which is both entirely in character for Gordon as well as something she’s never done before. Which is, in itself, true to her spirit of reinvention.

Working with a collaborator and handing over some of the control in shaping the songs provided an opportunity for unpredictable results, and scratched a certain creative itch for Gordon.

“I found it to be kind of an interesting way to work,” she says. “I had never really worked that way with a producer, just kind of giving him material and seeing what he did with it. I was interested to work in a way that was different than I have with Body/Head, but not in a regular band.”

Also factoring into a period of seemingly overflowing creativity is a heavier focus on visual art, which this year has seen her open her first solo exhibit at Pittsburgh’s Andy Warhol Museum, another one that opened at the Irish Museum of Modern Art, plus a fashion collaboration with her daughter, Coco, and an art book due next year. The change in medium brings about some freedoms that music doesn’t — she notes that one benefit is not having to go on tour. But there’s also a feeling of creating an event that’ll never happen again that feels exciting to her.

“With music, you turn on a faucet and water comes out. It’s accessible, instantaneously, over and over and over again,” she says. “You can go into a museum and look at a painting over and over again, but if you put together a show where the work all represents one idea, or platform or arena, it’ll never happen that way again.

“In the art world, it’s really hard, because if you end up doing paintings or work that people like, it’s tempting to just keep doing that,” she says. “But I always feel the urge to move forward.”

It’s safe to say that Kim Gordon won’t stay in one place for very long, though in a literal sense, she’s become somewhat settled, despite how much her home city — and she, herself — has changed. Los Angeles is where she sleeps, but she’s quick to point out that her definition of home is something different altogether.

“I grew up here, but I lived in a totally different part of the city,” she says. “I grew up in West L.A. which was more flat and suburban. So it was kind of a different experience, and the city is different now. But nothing is ever how you remember — you’re a different person when you move back, as much as the place changes, essentially. For me, home is where my daughter is.” 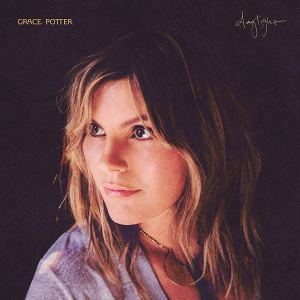