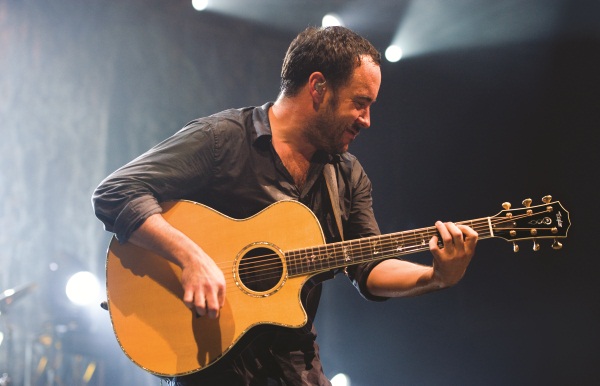 Now entering its 21st year, the Dave Matthews Band has become a part of the musical fabric of America, and Dave Matthews has become a major inspiration for many singer-songwriters. Matthews and the DMB became known for an innovative sound that initially eschewed the usual use of an electric lead guitarist, and instead favored violin and saxophone solos with Matthews’ own innovative acoustic rhythm guitar style on original compositions that were anything but mainstream. Matthews was, and may still be, one of the closest things to the heyday of FM rock when bands were allowed to be themselves and were marketed on their originality and talent.

Matthews’ songs are sometimes in odd time signatures, with chord voicings and progressions that are a far cry from “normal” American pop or country music. The DMB has filled arenas for nearly two decades now, and has secured a place in music history with a dozen platinum or multi-platinum albums that feature such hits as “Too Much,” “Crash Into Me” and “Crush.” Matthews’ guitar of choice for live performance and composition is the Taylor, especially the 914 CE, which Taylor’s Dave Matthews Signature Model, sometimes referred to as the “Grux” guitar, is based on.

Craig Baker has been Matthews’ guitar tech for the past four years, and said that a 914 CE Matthews bought at Dusty Strings in Seattle has long been Matthews’ number one axe. “He has three 914s made in 1999, but his main 914 he bought so many years ago is a sturdy workhorse,” said Baker, who has also worked with Pantera, Alicia Keys’ band, and another well-known singer-songwriter and guitarist, John Mayer. “The other Taylors Dave uses are mostly more recent ones and the ‘Grux’ signature model.”

“I check the set up on the main 914 CE daily,” Baker said, “and sometimes, though rarely, make a truss rod adjustment. Dave plays hard, not just with his right hand but with his left as well. About every two years, with regular touring, I have his main 914 refretted as he will scallop the frets. I try to be proactive and do it on a break so it doesn’t become an issue or need to be done in the middle of a tour.”

“For Dave’s right hand,” Baker continued, “it’s obvious from any photo that there’s substantial pick wear on his main 914, especially above the soundhole, so to prevent wearing through the top of the guitar we treated the wear mark and resealed the top. As far as the strings, I restring, on average, every seven songs. I do this to prevent breaks and substantial interruptions to the song and show. Also, every DMB performance is a possible live release, so to keep the sound homogenous throughout the set, changing strings usually midway helps keep the guitar sounding fresh from the first song to the last.” Matthews’ first Taylor was a 714, and he also employs a Taylor W65 12-string.

Baker said that, unlike some artists who sometimes have an air of secrecy about what they do, especially in the writing process or in the studio, Matthews has him on hand for just about everything.

“I’m there almost every time Dave plays guitar in public or the studio,” Baker said. “I’m fortunate to be with him year ‘round whether we’re on tour or not. Working with him in the studio has been a great learning experience and given me more skills for what I do in the live environment. It’s a remarkable process to see a Dave Matthews song go from an idea or a few chords to a finished piece.”