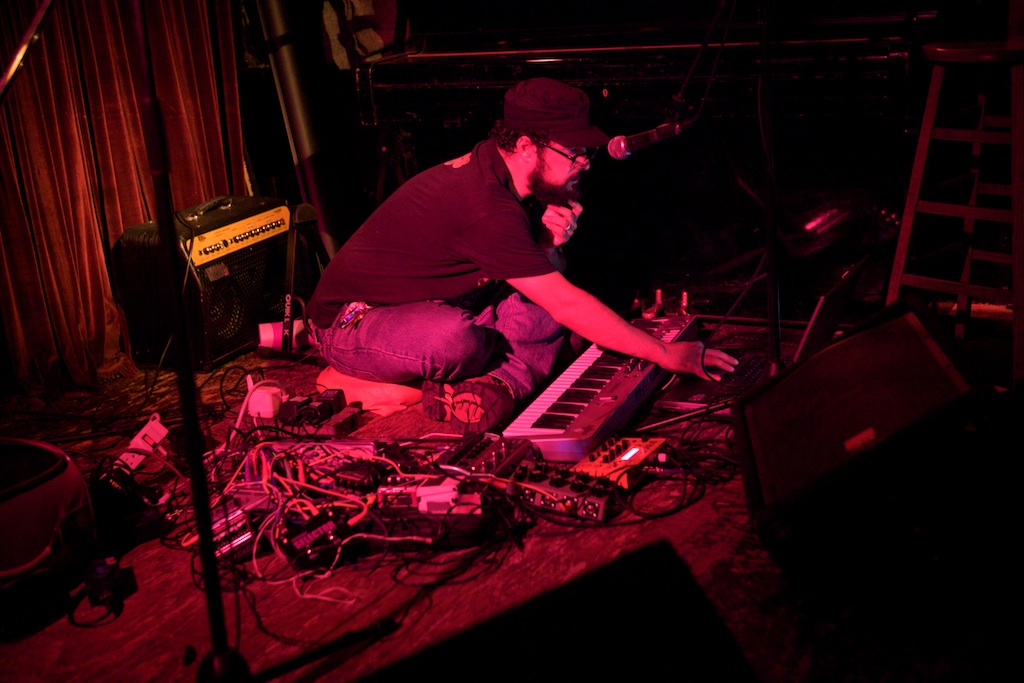 Many have ventured to Sidewalk Café’s Monday Night Open Stage in hopes of getting their artistic chops seen and heard, but few have dug deep enough into the inner workings of this well-oiled, albeit, mysterious machine and uncovered how shows are actually booked, how the Antifolk Festival is scheduled, and what it takes to make the most successful and sought after open mics in New York City run smoothly. Ben Krieger, the booker of performers since July 1, 2008 for Sidewalk, and host of the Open Stage sits down with American Songwriter for the first time and gives an eye-opening glance into one of the most talked about venues in New York, speaking candidly about what he looks for when booking shows and ways newcomers can stand out in the Antifolk community.

Krieger, who has been writing and recording his own music since 1995 arrived on the Sidewalk Antifolk scene in 2005 and quickly caught the eye of then-booker and self-proclaimed coiner of the term “Antifolk,” Lach. After working as a sound booth operator at Sidewalk and sitting in on almost every Monday open mic, (then called Lach’s Antihoot) for a year, Krieger inherited the most-attended open mic in NYC, and renamed it the “Monday Night Open Stage.”

Sidewalk Café once again gears up to host the bi-annual Antifolk Festival from February 22nd to February 26th; a five-day mind-altering artistic hypnosis, featuring an array of multitalented regulars and newcomers alike on the scene such as Brook Pridemore, Charles Mansfield, Keyke, Brian Fitzsousa and Rob Shapiro. Minds will be blown, sanity will be questioned and the air will hang thick with inspiration—all made possible by the help of Ben Krieger, whose unwavering passion of music and the Antifolk movement have kept this anticipated tradition thriving.

How’d you get this gig as booker/host? I doubt Lach posted it on Craigslist.

I think I was the third or fourth person that got offered the position, and the first one that was willing to take it. I guess not everybody needed the money as badly did at that point. I had been playing the role of Ed McMahon at “Lach’s Antihoot” for about a year. One night in May of 2008 he pulled me aside and made the offer, and two months later I was at the helm.

Lach often plugged humorous, fictitious sponsors throughout the night that incorporated catch phrases that regulars could become familiar with. I tried to capture that vibe in my own way with kitschy jingles and sound bites on my laptop throughout the evening. If you hang out long enough you’ll end up whistling along to the “Waiting Theme” and the “One Song Wonder Round” jingle.

The night is also run very similarly with the [introductory] monologue at 7:30pm [where I explain the format of the open stage], the randomly selected lineup, the “One Song Wonder Round,” and the reserving of early slots for people promoting shows at Sidewalk during the week of.

What’s been your biggest struggle as the booker/host of the “Monday Night Open Stage?”

Keeping it fresh. If you do anything long enough, you start to get into a rut and I believe that can rub off subconsciously on the crowd. We’ve been having some fun with the night lately. The last Monday of every month is usually a theme/challenge night of some kind. Debe Dalton, a staple performer at Sidewalk, had a feature set that was such a positive experience that I’m considering a feature once a month.

How does someone get booked for a full show?

They can send me links to their music at info@sidewalkmusic.net or show up on Mondays for the open stage so we can hear them live.

What’s the most annoying part of you job?

Ok, what’s the best part of your job?

I am required to leave my family at least two nights a week to see my friends and check out good music in a bar where I drink and eat for free.

How do you feel about people performing covers?

It depends on where their interpretation falls on the “Shit-to-Sinatra” scale. Most people don’t approach covers with enough conviction, effort, or original voice and approach to make it tolerable.

Describe the process of the renovation of Sidewalk. How much of a roll did you play in the transformation?

[Sidewalk was] closed for five months. I told management that we needed a new backline and a sound system upgrade. I also stressed that if they lost Debe Dalton’s plaque the Sidewalk would be struck by lighting.

What would you change back?

There was this really gruff guy with a long, gray ponytail who used to wander in the back room every once in a while. With a deep, Israeli accent he would ask, “What the fuck is this shit?” He was a real fixture and I miss him. There was this smokin’ hot Southern waitress that used to work the back room on Mondays. I miss her. And I’ll never forgive [management] for killing the salmon burger.

Describe this season’s Antifolk Festival lineup. How did you select the artists?

I asked several Antifolk community members to curate a few nights, invited a few high-profile acts to play, made a list of regulars who have consistently been around over the past few months, polled the regulars about any new artists who we thought should be a part of the event, and filled out the rest of the schedule with artists who would represent the diverse, multi-generational scene.

What nights of the festival shouldn’t be missed?

Don’t miss my set on Friday, February 24th. I’ve put together eight of these festivals now, and have consistently downplayed my own participation. No more. If you can only see one performer during the festival, come see me as Yossarian Feedback. Also, see Jon Berger. That guy is a poetic genius and is considered [one of] Antifolk’s MVP. Rare treats for this fest include Ching Ching, Larkin Grimm, Turner Cody and Osei from The Woes.

And now, for a question which separates the men from the boys: In your own words, what is ‘Antifolk?’

Did Lach offer any words of wisdom upon passing the torch?

He told me to put my family first and ask for a raise when the weather got nice enough for Sidewalk’s outdoor seating. I’ve followed that first bit, but put off the second part for three springs already. Maybe this is my year.

What things that performers do make you cringe?

If you aim a microphone at a 90-degree-angle, perpendicular to the boom stand, it will slip. This is a simple matter of physics, specifically torque. People would think that I lament the lack of funding for music and art in the public schools, but it’s science that really gets my Irish up. These kids should graduate knowing how to handle a microphone stand.

What is the “Monday Night Open Stage’s” format?

I’m afraid that if I answer this question, people will think they can show up late and miss the monologue introduction at 7:30pm. I explain everything then. But www.sidewalkmusic.net does have a decent rundown if one is curious.

Any Sidewalk news to announce?

The kitchen is working on a secret, off-menu burger called “The Krieger.” It will have special ingredients and a great price. Anyone who’s in the know will be able to order it.

How did you come up with the idea for Sunday Blackout Nights?

Ever since I started playing high-volume, experimental sound college shows as Yossarian Feedback, I’ve wondered how I’d be able to pull off the set in a post-nuclear apocalypse. I became interested in bicycle generators and thought it would be fun to create a candle-lit, powerless event where I could perform while riding a stationary bicycle. I haven’t been able to get my part off the ground, but we started the Sunday Blackout Nights without [my bike idea.] They were such a hit that we’ve decided to make every Sunday in 2012 a blackout. Hopefully, I’ll have the bike ready this year.

I think that Emily Einhorn and Crazy & the Brains, who both spent a lot of time working on their craft over the past few years, are pretty hot at this point. In terms of people who have popped up in the past year, I like Andrew Choi a lot. Matthew Silver is pushing his act in different directions. There are a lot of newbies who I have high expectations for. I can’t wait to see where they are with their art in a year.

Are you working on any new music?

Right now I am assembling the third Crabs on Banjo record compiled from three years of live shows. COB is known for eliciting song titles from the audience, composing on the spot, and recording the live results. We have never played the same song twice. I’m sifting through the current crop and will have a double album ready by April.

Who influences your music?

I draw equally from The Replacements, Rush, Merzbow and the Big Red Chewing Gum jingle.

How has your personal music evolved over the years?

As time goes on I care less and less about what other people think about my art. I don’t know whether or not this has made my work better. There are songs that I composed as I restrained, thoughtful craftsman 10 years ago that I think are really lovely. One thing remains constant: I create for my own personal enjoyment. I know some people don’t like to revisit their projects, but I’m the opposite way. I assume that I’m the only one who will want to listen to it, so I make sure it’s something that I’ll enjoy.

I currently book one to three months in advance.

Any advice to newcomers on the scene?

Don’t ask me what number we’re on [during the “Monday Night Open Stage.”]

What do you hope to see happen in the future with the Antifolk genre?

As the Klingons would say, may it die well.

Are you happy with your life thus far?

Yes, but I think it’s a partnership. Hopefully, my life is also happy with me.