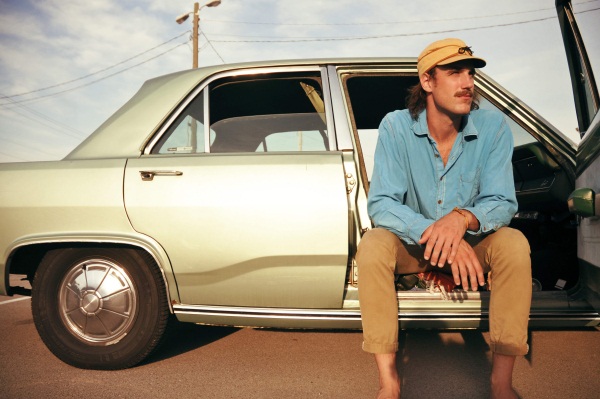 In late April 2011, Rayland Baxter traded in his Jetta for a 1969 Plymouth Valiant at a used car dealership near the fairgrounds on Nolensville Road in Nashville. He parked it in his driveway and then went on tour with the Civil Wars.

When he got back, he decided he would drive the car, which he nicknamed the Goose, around the country.

“I live in a little bit of a time capsule,” admits the 28-year-old songwriter. “But it is a very dependable car,” he adds matter-of-factly, after I question the practicality of touring in a vintage automobile nearly twice his age.

Baxter’s debut album, feathers & fishHooks, is a bird’s-eye – or , perhaps, fish-eye – view of life as a restless twenty-first century troubadour.

“You can find me on the hillside looking all around / Or out there by the oak trees on the edges of town,” he sings on “The Woman For Me,” one of the standout tracks. And so begins an album’s worth of travel sagas, tall tales, loose ends, and love songs.

After he finished college, Baxter packed up his car and drove straight to Colorado. “I got a job at a guest ranch and just started living,” he says, putting the accent on that last word like he knows a thing or two about it. “I wanted to be in the mountains and on the streams and the rivers. I wanted to hike up and drink fresh water,” he says. He lived that winter in a camper with no heat while working four jobs.

If he sounds like your typical rambling and free-spirited musician, Baxter certainly comes by it honestly.

His dad is Bucky Baxter – Bob Dylan’s near-legendary pedal steel guitar player from 1992 to 1997. When he was a kid, Rayland lived with his mom and only saw his dad a few times a year, when they’d go on long trips together.

“When I was eight or nine, we went on a motorcycle trip,” he remembers. “He bought me a little blue electric guitar from a pawn shop and we were camping and he taught me how to play ‘Old MacDonald’ and a few chords.”

After his Colorado stint, Baxter moved to Nashville in 2008 and then went to Israel to stay with a close family friend, a doctor and mentor named Andre Wiseman.

What had originally been planned as a two-week trip turned into six months. Baxter says it’s when he really buckled down and studied his favorite songwriters and their songs. He filled notebooks with lyrics and song ideas that would become 2010’s EP, The Miscalculation Of Song.

He stayed at it when he got to Nashville. “I got a job with a welder. I would work all day from six in the morning ‘til eight at night. Then I’d go home and sit in my room and write songs. And I did that for a year and a half,” says Baxter, who’s known on the cliquey Nashville music scene for being a bit mysterious and avoiding the see-and-be-seen nightlife.

Over about three months last year, Baxter recorded feathers & fishHooks (he uses mostly lower case lettering) with friends in Nashville. The album feels lived in, going from the joyful crooning chorus of “Driveway Melody” to the somber lament of “Hoot Owl,” a song his dad wrote.

Baxter, Sr., also played all the pedal steel parts on the album. “With he and I, when it comes to making music in the studio, it’s effortless,” Rayland says about working with his dad. “The way I’ve crafted my melodies I feel like has a lot to do with hearing him play pedal steel my whole life.”

For the album’s title, Baxter chose a dichotomy: a feather (“a beautiful thing”) and a fishhook (“a really intrusive and sharp thing”). When you put them together, you’ve got a fishing lure. Fly-fishing is kind of like songwriting and performing, anyway, Baxter says. You have to find a rhythm and then lure the audience in.

The album’s opening track, “The Mtn Song,” also captures his love-and-nature ethos. “If I could give you everything I would,” he tells his muse. He’s talking about mountains, oceans, seas, forests, flowers, and trees. “But if love is all you need, then we are good,” he concludes, simply.

Baxter has that distant way of talking about lovers that the early Dylan records had – seeing life as humorous, beautiful, joyful, and sad, usually all at the same time.

“My heroes from back in the day – Bob Dylan, Leonard Cohen, Townes Van Zandt – all  those guys that were troubadours and playing music, they were always out playing and living life and experiencing things. They were jumping in the ocean and driving …”

As he trails off on that last word, I almost feel like I could be out there with him right now. But he’s a phone line and hundreds of miles away – though hopefully not decades too late. 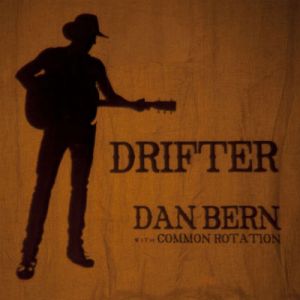 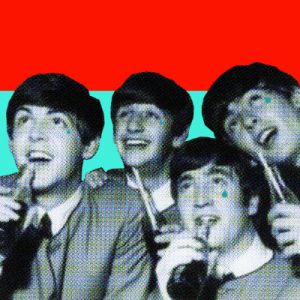