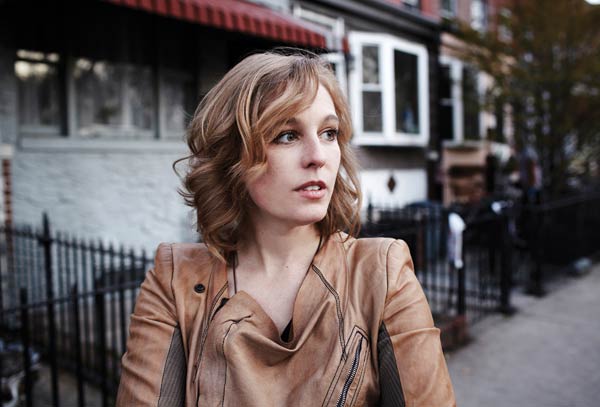 Stream the song “Mixtape” from the new album See You On The Moon.

Even if you didn’t know that Tift Merritt grew up in North Carolina and now lives in Manhattan, it wouldn’t be terribly surprising. Her conversation, like her songs, is warm, open and southern-quirky, but just below it lies the directness of someone who knows how to say, “Hey, stop the bus!” During the course of a spirited talk about her new album, See You On The Moon, she will make it clear—twice—that she’s not a country artist. She will also get downright ornery when professing her love for Anne Murray. In other words, this is a polite but plain-spoken gal.

“I don’t think of the record as particularly melancholy,” Merritt says, responding to my comments about the dark side of this Moon. “However, I do tend to write about the big stuff, like birth and death. There are definitely some ghosts on the album, as well as a baby or two being born. I think of my songwriting as unfettered and direct. Plus, I wanted a stark, ‘no-sheen’ kind of production. Maybe that’s why the disc seems spooky at times.”

Full of ghosts of the deceased (Merritt’s grandmother and a former neighbor hover around in the songs), See You On The Moon is a beautifully bummed affair. At its heart is the stately title song, which is a quiet gospel for that neighbor. But there’s also the Searchers-style jangle of “Six More Days of Rain,” the sparse, funky “Mixtape,” and “Live Till You Die,” which was “inspired by listening to Emitt Rhodes.” All told, Moon shows an impressive array of influences, resulting in a record that hangs together beautifully, but is never static. Add Tucker Martine’s crisp, life-sized production and you have the strongest record of Merritt’s career.

According to Merritt, the tunes and sounds on the record came about the old-fashioned way: in an atmosphere where accident, experiment and inspiration are given the chance to arise and intermingle freely.

“A lot of things you hear are really just the result of building the song, then putting on the track what is needed. That chiming 12-string on ‘Six More Days of Rain’ is not Scott [McCall] trying to sound like George Harrison. It was, ‘Hey, let’s make the guitar sound bigger.’ Basically, Tucker came to our studio in North Carolina and hung out. It was all very relaxed. Both he and our label [Fantasy Records/Concord Music Group] understand the record business is in such an unpredictable state, you can’t really contrive a hit anymore. So you have just as good a chance with the public if you follow your heart and experiment.”

Staying open to accident is certainly responsible for the record’s heartbreaking title track. According to Merritt, she knew early on who the song was for and what it was about. Still, she couldn’t, over a long period of time, stitch the whole thing together.

“I had a neighbor named Doug when I was growing up who was this singularly kind man. The sort that took in a dog named Calvin, who was three-legged and deaf, having been hit by a train. He watched over everyone. Doug died about 10 years ago, and awhile after that, I was trying to write a song about him. I had some verses, but it wasn’t gelling. Then one day I was brushing my teeth and the song’s refrain just came to me. I felt, honestly, it was all the doing of Doug’s ghost. As usual, he was checking in on me.”

This tune, which mentions the “three-legged dog” and Doug’s kind ways, is one of the most clear-eyed, moving songs about death you’ll ever hear. The song’s gospel flavor (featuring Merritt’s piano played against raindrops of organ), and the wistful refrain of “See you on the moon,” conspire to make the narrator’s loss that much more incisive.

The record’s “try anything” approach also stretches to involve the aforementioned, often-misunderstood Anne Murray. As well as the pen of the equally maligned Kenny Loggins.

“At some point during the sessions, I was sort of interested in doing a version of [Loggin’s] ‘Danny’s Song.’ A lot of my friends are starting to have babies now, including Tucker’s wife. I began to play the song and was getting weepy, when there was this general uprising in the studio, because of who recorded it. Tucker and I just had to take up arms for Anne Murray. To cinch it, Tucker said, ‘Alright, you can have two takes to do the tune.’ It came out well. I don’t care what anyone says, in terms of who’s cool. Kenny Loggins has written some really good songs.”

Merritt will be hitting the road this summer to promote See You On The Moon. In addition, she’s written a couple of songs for an animated feature, Dorothy of Oz, scheduled for next year. She’s also busy hosting her monthly radio show and podcast, Marfa Spark, which features guests like Emmylou Harris and novelist Nick Hornby. Mostly, though, she’s got her musical path carved out and has her head on straight regarding how to walk it.

“It’s a weird thing figuring out how art and commerce work together. Mostly, I don’t think about chart success or awards or anything. Even though I did get Grammy and AMA nods a few years back. Mostly, I figure, I just have to keep my head down, do my work and be zen about things. Not think about the outcome. I know what I do. I write and sing southern ghost stories.”

Merritt pauses and sighs, the months of recording, and the fickleness of the music business weighing on her.

“You know,” she says, “going out on the road is tough. The selling part, anyway. It makes you feel like a carny—which I don’t like. But it’s OK. I’m really proud of the new record. So if touring is how you get people to hear what you’ve done, it’s OK. I guess I can go out and be a carny for a little while.”