“It’s a free country/ but it sure ain’t cheap…” growls former Nerves/ Plimsouls frontman Peter Case on “House Jump Party,” just one of many bar-fight-starting bluze-rockers on his latest solo effort, Wig! The above-quoted wisdom seems especially hard-won, since the album was recorded in the wake of Case’s insurance-less open-heart surgery that slapped him with a blues-inducing six-figure doctor bill. Of course, a former 1980s L.A. New Waver trying to age gracefully by taking up hillbilly music or embracing the sounds of the Mississippi Delta isn’t exactly a novel phenomenon; but these days Case has probably earned the right to dress and sound like John Lee Hooker.

Case’s filigree-free gutbucket approach works just fine on Wig!, with the songs’ arrangements stripped down to barest bare essentials: snaky guitar leads, chitlin’-circuit harmonica, and simple piano parts occasionally surface over the filthy cheap-tone electric guitars and skeleton-crew rockabilly rhythm section. Everything sounds like it was recorded by Alan Lomax in a Louisiana prison cell—and presumably this was the intended effect. The swampy tremolo-laden throb of “Dig What You’re Putting Down,” conjures up early CCR, and “Colors of Night” is a chooglin’ one-chord stomp where opposing guitar leads fight it out in a nasty cross-channel scrap throughout. And of course there’s the obligatory automobile-worship song, “New Old Blue Car,” which travels pretty much the same dirt-covered back roads as the previously mentioned tracks. Case’s voice isn’t always up to the task of mimicking the juke-joint blues shouters of yore, but musically he’s hit upon a comfortable 1980s-nostalgia-free format for himself at this stage in his career. Even though Case certainly depends on the distant past for inspiration here, Wig! makes his own storied Plimsouls past seem about a million miles away. 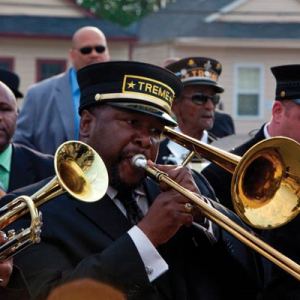