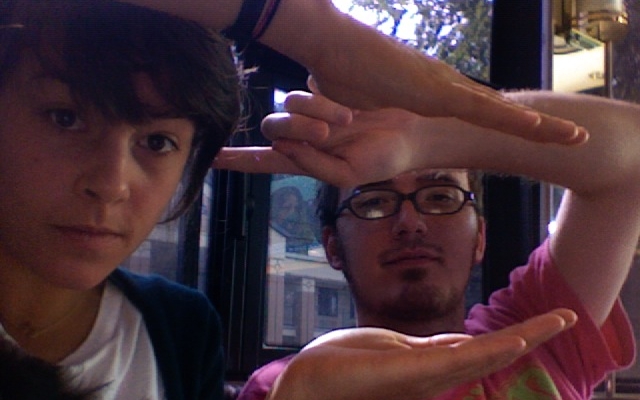 okay. so i know that we’ve been having great shows and all…..but really it’s time for me to go to sleep BEFORE 430. cool cool. um so last night was atlanta. and it was way fun. everyone’s really starting to pull together and it’s feeling like one big happy frickin family!!! isn’t that cute? afterwards we all went around the corner and drank many many good belgian beers and THEN went back to the bus and finished back to the future 3 and even made it thru the metallica doc. right.

Rolled into Atlanta and woke up to the sound of Dean requesting me to wake up for a TV thing….ouch….really???…ok. We played good morning atlanta…..The Tv presenter guy did that “laugh to try and make something seem funny thing”….which made me laugh cause it wasn’t……but I guess that’s his job ya know.
I crawled back on to the bus and into my bunk and woke up by Eddies attic…..hungry….Ks and Mikky and I passed a football field that looked kinda small so we walked around the other side of it and decided yes….it was indeed regulation…..but it still looked small….maybe because televisions are…..small.
We found a little taco joint……i ordered a Quesadilla…..could that word be spelled any stranger given the way its pronounced??…..the chicken had a bit of a wang too it so I only ate half….come to think of it I didn’t eat dinner either!!!……we found a nice little park bench and Will, Kyle and Madi joined us……a little breeze kicked up and we laughed while trading sarcasm and other slightly higher forms of wit.
Great to have sarah back out with TOT….she sang a show stopping version of “lovins for fools”…..everyone had a really good show….the place was packed….we won.

Check out this video of k.s. Rhoads “freestylin” his way into “Could This Be Love.”

Read a write-up of the TOT tour in The Washington Times.